Land-use change (LU) is a major regional climate forcing that affects carbon-water-energy fluxes and, therefore, near-surface air temperature. Although there are uncertainties in LU impacts in the historical climate, there is a growing consensus towards a cooling influence in the mid-latitudes. However, how a drier and warmer land surface condition in the future climate can change the LU impacts are not investigated well.

We use a comprehensive set of five coupled climate models from the CMIP6-LUMIP project to assess the changing influence of the LU change. We use two methodologies: (1) direct method – where LU impacts are estimated by subtracting the ‘no-LU’ climate experiment from the control experiment that includes LU, and (2) Kumar et al., 2013 (K13) method where LU impacts are estimated by comparing climate change impacts between LU and no-LU neighboring regions. 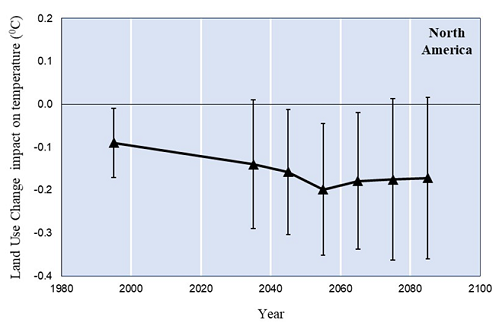