The STIMTEC-X hydraulic stimulation campaign at the URL Reiche Zeche Mine, Germany

In 2018-2019, the STIMTEC hydraulic stimulation experiment was conducted at the Reiche Zeche underground laboratory in Freiberg, Saxony/Germany, to investigate the role of hydro-mechanical processes for the often required enhancement of hydraulic properties in deep geothermal projects. We applied the same injection protocol to each of the ten stimulated intervals in the 63 m-long injection borehole. Yet, we observed significant small-scale variability in the seismic and hydraulic responses to stimulation and in parallel stress field heterogeneity on the meter scale. While acoustic emission (AE) activity was high in the upper part of the injection borehole, no AE events were detected in its deepest part, ending in a high-permeability damage zone.

To investigate the stress field and seismic variability throughout the experimental volume and their interrelation further, we started the follow-on experiment STIMTEC-X. The initial phase involved eleven local stress measurements performed in October 2020 in three existing boreholes, previously used for monitoring purposes, with varying orientations and lengths. This phase of the experiment was seismically monitored in real-time using an adaptive, high-resolution seismic monitoring network comprising six AE-type hydrophones, six regular AE sensors and four accelerometers. The hydrophones were installed in combination with hydraulic gauges or the double packer probe used for localized injection to make best use of the existing infrastructure. Hydrophones were optimally placed for each measurement configuration anew with at least one deployed in the direct vicinity (~3-4 m) of the injection interval. We detected low-magnitude AE activity (M<-3.5) at high resolution, spatially distributed between distinct clusters identified previously during the STIMTEC experiment. Overall, these records indicate a doubling of the seismically active volume. We also performed eight dilatometer tests to determine deformation characteristics of induced hydrofracs and pre-existing fractures. A circulation experiment between the injection borehole and two newly drilled boreholes of 23 m and 30 m depth is pending. Here, we present the seismicity associated with the STIMTEC and STIMTEC-X hydraulic stimulation campaigns and focal mechanism solutions. We focus on how they contribute to 3-D volumetric stress field characterisation between local stress measurement points. 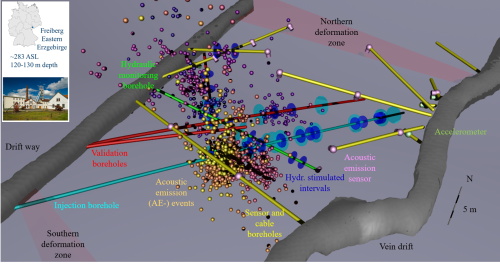