Climatic characteristics and weather events have always conditioned the success of a harvest. Climate change and the associated increase in intense weather phenomena in recent years are making it clearer than ever that agriculture is among the sectors most at risk. Although problems in agriculture are found all over the world, the most vulnerable contexts are those where agriculture is low-tech and rainfed. Here, adaptation strategies are even more urgent to secure the food production. Assuming that the awareness of climate change is the basis for the adoption of adaptation and mitigation strategies, it is interesting to correlate the degree of perception of local inhabitants with their willingness to adopt bottom-up initiatives.

The current study focuses on banana producers’ perceptions of climate change in a tropical valley, and the initiatives that farmers adopt to cope with recent intense weather events. The banana plant (Musa Musacae) grows in tropical climates with annual rainfall around 2000 mm and average temperatures around 27°C. The species’ threadlike root system and the weak pseudostem make it particularly vulnerable to wind gusts, which, at speeds higher than 15 m/s, can bend and knock over entire plantations. The increased frequency of convective thunderstorms observed in connection with climate change has made downburst phenomena more frequent and caused greater crop loss.

The aim of the present work is to estimate the correlation between banana producers’ perceptions of climate change and their bottom-up initiatives for adaptation. To achieve this goal, the case study of the Upper Huallaga valley, which is located in the Peruvian Amazon region as shown in Figure 1, is analysed. The work was carried out at two levels: (i) we interviewed 73 banana producers in the valley, (ii) we estimated the alterations and trends in temperature and precipitation recorded by the only three available meteorological stations within the valley. Finally, we compared the two databases to evaluate if the perception of the population was confirmed by the data. Most of the surveyed population observed an increase in temperature, consistent with the results of the data analysis, and an increase in precipitation, which was not consistent with observations as these showed a cyclic variation without a clear trend. With regards to the adaptation measures, it was observed that, although a clear majority of the sample surveyed (around 82%) agreed with the existence of climate change, only 46% of them had taken any initiative to counteract adverse events in some way. However, it is important to note that the strategies implemented were all devised and implemented by the farmers themselves. Funding and coordinating the dissemination of these adaptation practices by the local authority through a rural development plan could certainly strengthen the population’s effort. 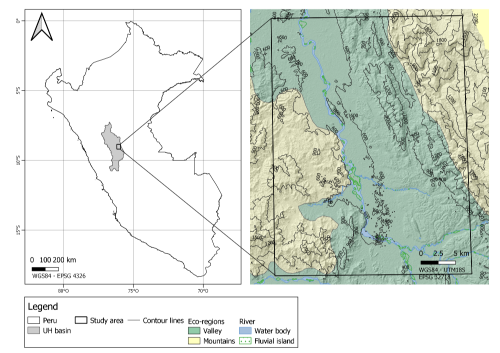 Figure 1, On the left side: the Upper Huallaga basin. On the right side: the study area