The LiCSAR products are generated in frame units where a standard frame covers ~220x250 km, at 0.001° resolution (WGS-84 coordinate system). Frames are continuously updated for tectonic and volcanic priority areas. In 2020, the LiCSAR system covered about 1,500 global frames in which we have processed over 89,000 Sentinel-1 acquisitions and generated over 300,000 interferograms. Among these, 470 frames cover 1,024 global volcanoes. We aim to cover the global seismic mask defined by the Committee on Earth Observation Satellites (CEOS), but focus initially on the Alpine-Himalayan belt and East African Rift.

We serve the products as open and freely accessible through our web portal: https://comet.nerc.ac.uk/comet-lics-portal and aim to provide them to shared infrastructures as the European Plate Observing System (EPOS). We also generate rapid response coseismic interferograms for earthquakes with moment magnitude (Mw)> 5.5  a few hours after the postseismic data become available, and we update frames covering active volcanoes twice per day.

Our products can be directly converted to displacement time series and velocities using  the LiCSBAS time series analysis software. We present solutions implemented in LiCSAR, and show several case studies that use LiCSAR and LiCSBAS products to measure tectonic and volcanic deformation. 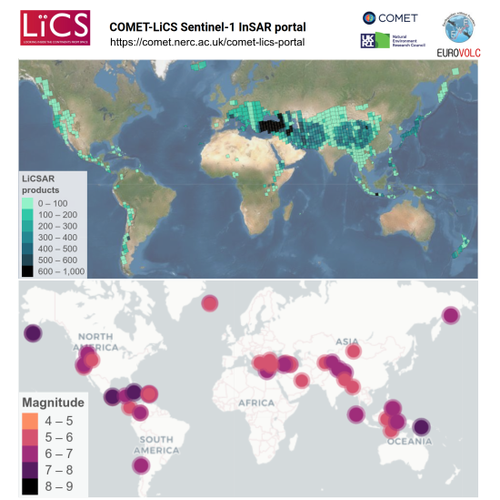