The evolutionary pathway of polluted proto-planets

1. Introduction:
In the traditional core accretion scenario, a planet grows by the subsequent accretion of a solid core and a gaseous envelope [3]. However, the accretion of these solids generates a large amount of heat, which can easily vaporize incoming pebbles and fractured planetesimals before the core has grown massive [1,4,5]. This naturally leads to the formation of planets with polluted envelopes that are characterized by different interior conditions and that follow an altered evolutionary pathway. In this series of papers [1,2+forthcoming], we develop new analytical and numerical models to describe the formation and evolution of polluted planets and link emerging trends in their formation to observations of planetary systems. 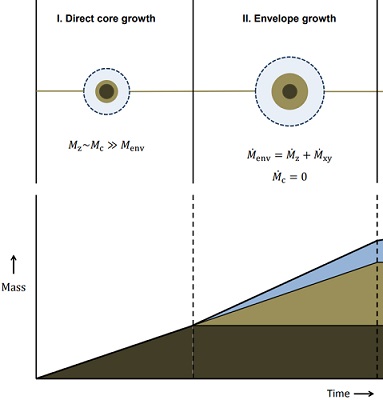 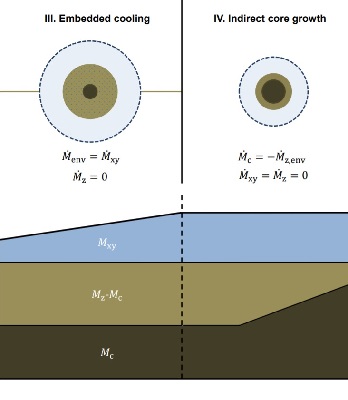 Fig. 1. A sketch of the four potential evolutionary phases of a polluted planet.

We find that envelope pollution substantially alters the structure of proto-planets in a number of ways and we suggest that their evolution can be described by four distinct phases, sketched in Fig. 1.

(I). In the first phase of direct core growth, the envelope is still cold enough for solids to reach the central core. As the planet's internal temperatures rise, an increasing fraction of the accreting solids sublimates and is absorbed in the envelope. This slows down the growth of the core until it halts completely when all incoming solids become vaporized and remain in the envelope. We find that in the case of pebble accretion, this limits the size of the central cores to ‹ 1-2 M⊕, depending on conditions.

(II). We refer to the second phase as that of envelope growth, as this is where all the accreted solids end up after direct core growth ends. In our analytical model, we assume that it mixes efficiently with the nebular gas but we relax this assumption in a forthcoming numerical work. Regardless, we find that polluted interiors become very hot and dense due to a higher mean molecular weight, lower adiabatic index and smaller core. Interior temperatures can already reach values in excess of 104 K at only a few Earth masses. Traditional models use the critical core mass as a criterion to identify the transition to runaway gas accretion but this term becomes a meaningless in planets that do not grow their cores beyond a certain size. We therefore suggest the critical metal mass (Mz,crit) as an equivalent criterion to supercede it. It is defined as the total mass in solids (core + vapor) that a planet needs to accrete in order to reach runaway growth. We derive the first expression for this mass:

where κrcb is the opacity at the radiative-convective boundary, d is the planet's semi-major axis, Tvap is the vaporization temperature of the solids,  is their accretion rate and Mc is the mass of the central core. Planets that form beyond the ice-line accrete a larger fraction of volatile materials and therefore form smaller cores with material that is characterized by lower vaporization temperatures. Both these effects reduce the critical metal mass compared to the inner disk where super-Earths and mini-Neptunes are more resistant to runaway gas accretion.

(III). If a planet stops accreting solids before it reaches runaway accretion and while the disk is still present, it enters a phase of embedded cooling. This naturally happens in pebble accretion when a planet reaches the pebble isolation mass and begins to perturb the surrounding disk. The continued inward drift of tiny dust allows the planet to maintain a high opacity, limiting the pace of cooling. Besides this, the dilution of the interior can counteract the contraction of the envelope and further limit nebular accretion, although this requires the interior to remain compositionally mixed. We suggest that a combination of these effects can help explain why Uranus and Neptune did not reach runaway gas accretion, even if their solids flux dried up while the disk was still present.

(IV). Finally, the proto-planetary disk will dissipate and the planets eventually enter phase IV of isolated cooling. In traditional models, this is mainly associated with contraction and potential mass loss. We suggest that in the case of a polluted planet, the cooling will eventually lead to the rainout of the vapor interior and generate a second phase of (indirect) core growth after several Gyr. While the process of photo-evaporation should not be altered by this, we find that it makes internal energy release an ineffective mass-loss mechanism. This is because most of the energy is only liberated late in the planet's evolution after substantial contraction, when mass loss from winds is far less efficient.

Fig. 2. Trends in the critical metal mass from the opacity of gas, dust and pebbles.

We model the opacity during pebble accretion in a forthcoming work with a combination of molecular, dust and pebble contributions. We find that pebbles can effectively reduce the dust abundance through sweep-up, but only in the early stages when nebular gas accretion is outpaced by the pebble flux. Near the onset of runaway accretion, the opacity displays a dichotomy between the hot inner disk where molecular opacity dominates and the outer disk where dust obscures the envelopes. The result is an opacity valley around 1-3 AU that translates to an equivalent minimum in the critical metal mass at the same location (see Fig. 2), which can help explain the abundance of warm Jupiters in this region.

Acknowledgements:
This work has benefited from discussions at the ISSI Ice Giants Meetings in Bern 2019 & 2020. Marc Brouwers acknowledges the support of a Royal Society Studentship, RG 160509.