Amateur Ground-based Support of the first BepiColombo flyby of Venus

The European-Japanese joint mission BepiColombo (ESA/JAXA) will arrive to Mercury on December 2025 after an interplanetary trajectory in which it will perform two flybys of Venus on 15 October 2020 and 11 August 2021. The flybys will be a unique opportunity to study Venus from a multiple perspective. In fact, during the flybys BepiColombo will make Venus observations and measurements in coordination with the Japanese Akatsuki mission, currently in an equatorial orbit around the planet. In addition, a large ground-based campaign to observe Venus has been organized not only during the flyby, but also in August 2020, when Venus reaches its maximum elongation (45º), with an apparent size from Earth of 23-24 arcsec.

Because Venus has a dynamic atmosphere subject to the development of large-scale waves, small scale changes in its winds, and different cloud patterns, and because the views from BepiColombo and Akatsuki are obtained at different phase angles than those observed from Earth, context observations provided by amateur astronomers can significantly enhance the scientific return of the BepiColombo flyby. At the time of this writing (June 2020), we are organizing an additional ground-based amateur campaign to observe Venus during July-October 2020 to support the first Venus flyby. Observations in July will also be used to support the analysis of data acquired during the 3rd flyby of Venus by the Parker Solar Probe on 11 July 2020.

The campaign has two roads of collaborations. Firstly, we are encouraging amateur observers to observe Venus in July-October with a particular focus on observations at the end of August and in the week of the flyby. Secondly, we encourage amateur observers to apply for observations in the Europlanet Telescope Network (https://bit.ly/2Br5LDt), where observations of solar system targets and ground-based support of space missions are primary themes. The Telescope Network opened its call for observations on 1 June 2020 and it is open to applications from both professional and amateur astronomers. All applications are reviewed by a scientific board. If granted, the Europlanet Telescope Network will support travel, per diem costs, and local accommodation costs of up to two observers, as well as the incurred service costs of the telescope facilities. The network is also open to non-European participants.

Figure 2 shows the trajectories of the BepiColombo and Akatsuki missions close to the Venus flyby. These different perspectives result in different geometries of the observations during the flyby as showed in Figure 3. 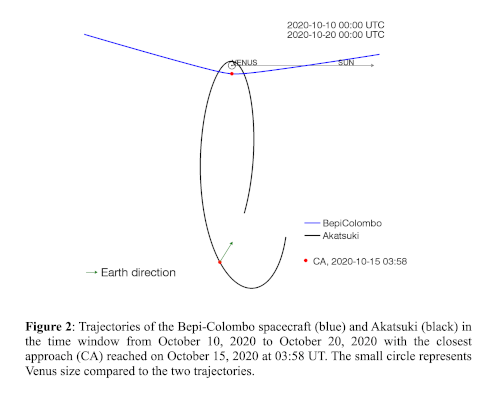 The Science potential of an Amateur Campaign

We have issued an observational alert and campaign through PVOL with communication of the amateur campaign using social networks such as Facebook amateur astronomy webpages and email lists such as ALPO, hstJupiter and others. The current campaign has been inspired by the excellent observations of Venus obtained during Spring 2020, and the successful scientific use of Venus amateur observations prior to the Akatsuki orbit insertion in 2015 [1] and during the Messenger flyby of Venus in 2007 [2]. Current studies of Venus atmosphere from Akatsuki also show the potential of amateur observations that complement data obtained by large telescopes or from dedicated spacecraft [3]. In this presentation we will show preliminary results of the observations obtained during July-August, perspectives for the closest approach on October 15 and further plans for a similar campaign during the second BepiColombo flyby of Venus in August 2021.

Updated information on the amateur campaign will be available on the PVOL website at: http://pvol2.ehu.es/bc/Venus/