Mass spectrometric measurements conducted on various amino acids that are relevant to life as we know it on Earth are presented using ORIGIN. ORIGIN is a novel Laser Desorption Mass Spectrometric setup designed for in situ operation on planetary surfaces, including the icy surfaces on ocean worlds such as Europa and Enceladus. Laser desorption measurements were conducted on single amino acids and amino acid mixtures to investigate their fragmentation behaviour at given laser settings. Simple mixtures consisting of four amino acids and a complex mixture consisting of ten amino acids at various concentrations and with components ranging from Glycine to Tyrosine are investigated. The unique fragmentation patterns observed for the single amino acids allowed successfully the identification of amino acids in the complex mixture. The measurement capabilities of ORIGIN are of high importance as ORIGIN represents an alternative instrument to traditional space instruments for future space exploration missions devoted to the detection of life.

The icy moons Europa and Enceladus of Jupiter and Saturn, respectively, represent promising objects in our Solar System that may host life in their liquid oceans underneath their ice crust. Through cracks in the ice shells signatures of life, such as amino acids, lipids, among others, may escape the liquid oceans and form deposits on the surface, which can be probed more easily by instrumentation than in the ocean directly. However, in situ operation of instrumentation designed for the detection of signatures of life is extremely challenging and sensitive instrumentation is required to withstand the harsh environmental conditions that exist at the ice surfaces.

In our contribution, we present the current figures of merit of our newly developed laser desorption mass spectrometric instrument, called ORIGIN.

LDMS Measurements. Measurements were conducted using our newly developed laser desorption mass spectrometric setup, called ORIGIN [1]. ORIGIN consists of a miniature reflectron-type time-of-flight mass analyser (160 mm x Ø 60 mm) [2,3] that is coupled to a nanosecond pulsed laser system (pulse width ~3 ns, wavelength λ = 266 nm, pulse repetition rate = 20 Hz). The mass analyser is located within a vacuum chamber that is evacuated to a base pressure down to the mid 10-8 mbar level. An optical beam delivery system guides the laser pulses from the nanosecond laser system towards the vacuum chamber, towards the lens system that is just installed outside, above the entrance window of the vacuum chamber. The laser pulses are focussed through the mass analyser towards the sample surface to induce the desorption of the analyte of interest. The sample holder that consists of cavities is placed outside the laser focus to gently desorbed the analyte (laser spot size at the level of  ~30 µm). With each laser pulse, sample material is desorbed and partially ionised. Only positively charged species can enter the entrance ion optics of the mass analyser, and are subsequently guided to the detector system. The charged species arrive in time sequences at the detector system, and a quadratic equation is used for the conversion of the time-of-flight spectra to mass spectra.

From the measurements of single amino acids their fragmentation behaviour can be determined accurately. Subsequently, these fragmentation patterns allowed for the direct identification of amino acids in the more simple mixtures and the more complex mixture by fitting the mass spectra of the mixtures. Moreover, it is possible to simulate the entire laser desorption mass spectrometric of the mixtures.

In Figure 1 the laser desorption measurements conducted on one of the simple mixtures are shown (top panel) whereas at the bottom panel the simulated spectrum is shown. As can be observed, both spectra are almost identical to each other, which is of high importance as the simulation allows reliable identification of amino acids within a mixture. 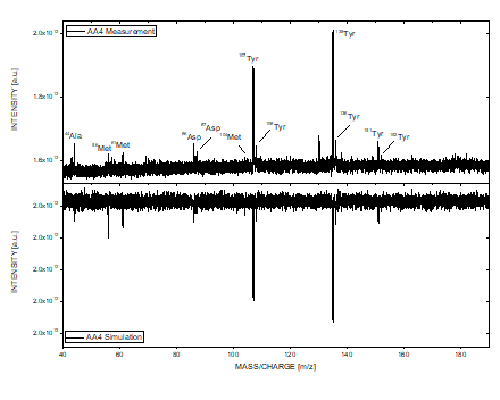 Laser desorption mass spectrometric studies were conducted on single amino acids to investigate their simple and robust fragmentation pattern and on simple and more complex mixtures of amino acids. Through simple fragmentation patterns observed for single amino acid measurements, amino acids in simpler and more complex mixtures could be identified directly. Moreover, the robust fragmentation patterns observed allowed to simulate mass spectra of amino acid mixtures. The latter is of high importance as it allows reliable post-measurement identification of amino acids. The study presented is of high importance for future space exploration missions because ORIGIN represents a promising analytical tool for the identification of signatures of life, if present, on e.g., the icy surface of Europa.