Origins, Spectral Interpretation, Resource Identification, and Security–Regolith Explorer (OSIRIS-REx) is a NASA New Frontiers mission to return a sample of near-Earth asteroid (101955) Bennu. The OSIRIS-REx spacecraft is equipped with a suite of scientific instruments [1], including the OSIRIS-REx Camera Suite (OCAMS) and the OSIRIS-REx Visible and InfraRed Spectrometer (OVIRS), among others. OCAMS’s high-spatial-resolution images of Bennu’s surface facilitate the identification of regions of interest, characterization of surface morphology, and mapping of relative surface albedo [2]. OVIRS is a point spectrometer that measures surface composition [3]. The OVIRS footprint during the Reconnaissance phase of the mission [1] had an observational field of view with diameters between 5 to 9 m.

We search for and distinguish organics and carbonates on the surface of Bennu by studying the shape of the 3.4-micron feature, as observed by the OVIRS spectrometer during reconnaissance of candidate sampling sites [4]. Aliphatic organics have vibrational stretching bands at 3.4 microns, and the CO32- anion in carbonate minerals has an overtone of a fundamental asymmetric vibrational stretch, also at 3.4 microns. Organics on asteroids are hypothesized to be related to the organic materials delivered to Earth during the early bombardment phase of Earth’s development [5]. Carbonates record evidence of aqueous processes on Bennu [6], and together the organics and carbonates provide evidence for Bennu’s alteration history.

We present the results of a search for Bennu spectral matches to specific laboratory carbonate spectra and meteoritic aliphatic organic spectra, in the wavelength range from 3.2 to 3.6 microns. The carbonate spectra were obtained from the RELAB facility at Brown University [7], and the insoluble organic material (IOM) spectra were obtained from [8]. For the carbonates, we test ~10 representative spectra each of calcite, dolomite, and magnesite. For the organic IOM, we test spectra such as Tagish Lake, Cold Bokkeveld, Mighei, Murchison, and Orgueil.

To prepare laboratory and OVIRS spectra for band-match testing, we first divide every spectrum by a continuum, defined as a second order polynomial. The parabola is constrained using reflectance values at the wavelengths 2.95, 3.24, 3.6 microns. We then “stretch” the band by normalizing each spectrum such that the band minimum occurs at 0.0 and the maximum occurs at 1.0. Thus, we are only comparing the band shapes, as all other quantitative information has been removed by the continuum normalization and the band stretching. 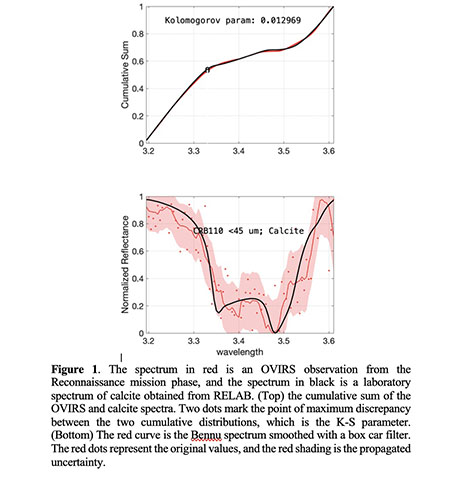 Figure 1 shows an example match between an OVIRS spectrum from Bennu and a laboratory spectrum of calcite.  Because the K-S parameter has a very low value (<0.013), we consider this a strong calcite detection. We perform the same test for the different types of carbonates and detect calcite more frequently than dolomite or magnesite. We perform the K-S test for all different types of IOM in our spectral library, and we find good matches on Bennu for the IOM in the Tagish Lake, Cold Bokkeveld, Mighei, Murchison, and Orgueil meteorites.

We will present maps of where carbonate and organic material is detected on Bennu and discuss our search for associations or correlations with boulders or other surface properties.

This material is based upon work supported by NASA under Contract NNM10AA11C issued through the New Frontiers Program. INAF participation was supported by Italian Space Agency grant agreement n. 2017-37-H.0. We are grateful to the entire OSIRIS-REx Team for making the encounter with Bennu possible.