The Saturnian moon Enceladus exhibits large cryovolcanic plumes sourced from a subsurface ocean which contain evidence of endogenic organic chemistry and ongoing hydrothermal activity [2-4]. Salt-rich ice particles observed in the plumes by the Cassini spacecraft are interpreted as rapidly frozen ocean spray [5] thus studying them provides a means of probing the chemistry, habitability and potential biology of an extraterrestrial ocean. A crucial step in understanding these particles is to determine the composition and sequence of solid phases that form upon freezing of Enceladus ocean fluids. We investigated the partitioning of ice and non-ice materials and the pH-dependence of cryogenic mineral formation using simulated Enceladus ocean fluids at contrasting cooling regimes: (i) flash freezing of ~4 µl droplets into liquid nitrogen (>10 K s-1), and (ii) slow freezing near equilibrium (~0.01 K s-1). Fluids were designed based on up-to-date constraints provided by Cassini data and modelling efforts [1,2,4,6]. Our findings provide new endmember constraints on the range of products produced by Enceladan cryovolcanism.

Imaging via cryo-scanning electron microscopy shows that flash-freezing produces a glass-like non-crystalline phase accumulated at ice grain boundaries (Fig. 1A). The formation of this ‘brine vein’ network demonstrates that ice had formed and solutes were excluded. Glasses represent a homogenous, unfractionated snapshot of fluid composition and would provide an ideal mechanism for preserving organics or microorganisms in their native state. 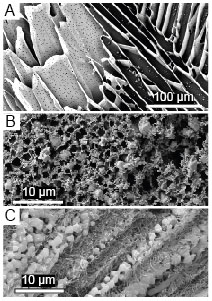 We found that salt minerals can form within the confines of brine veins through two contrasting routes: direct crystallisation during cooling (during gradual freezing), or ‘cold crystallisation’ upon warming of flash-frozen samples. These contrasting mechanisms were reflected in the distribution of salt crystals; flash-frozen samples exhibited random crystal distributions, homogenous at the 10 µm scale, whereas crystals produced by slow freezing were arranged in clusters of locally distinct crystal types and highly heterogenous at the 10 µm scale (Fig. 1B,C). These crystallisation textures record the rapidity at which the system solidified, with crystal growth of different phases occurring either simultaneously (in flash-frozen samples) or in a thermodynamically defined sequence (in gradually-frozen samples).

Measurements of bulk mineralogy using X-ray diffraction showed that at pH 11, carbonate assemblages were dominated by thermonatrite (Na2CO3.H2O), whereas at pH 9 trona (Na3H(CO3)2.2H2O) and nahcolite (NaHCO3) were the major phases (Fig. 2). This demonstrates that carbonate mineral assemblages can function as an independent pH probe for Enceladus’s ocean. Furthermore, at pH 9, nahcolite was kinetically inhibited by flash-freezing. Hence for lower pH fluids, the presence of nahcolite is an indicator of more gradual freezing whereas its absence may indicate kinetically-limited freezing. 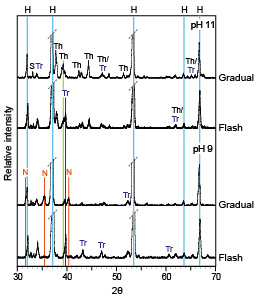 Our experiments describe contrasting scenarios for solid phase production upon cooling of fluids with an Enceladus ocean composition, each of which leaves a compositional and textural signature of its formation route. Whether glass forms at Enceladus depends on the thermal history of ocean aerosols as they travel upwards from the liquid/vapour interface to space. Particles encountered by Cassini that consist of pure water ice or ice and organics imply that condensation must occur throughout some portion of the Enceladus crack depth and thus that re-warming is likely [1,3]. Due to the self-limiting nature of evaporative cooling and the likelihood of re-warming a conservative assumption is that crystalline salts are more likely than glass in the Enceladus plumes. If crystalline material exists, its mineralogical composition and micron-scale partitioning can record fluid pH and delineate between thermodynamically defined crystallization in sequence, and kinetically limited simultaneous crystallisation. Based on these findings, non-destructive measurements of plume particles could open powerful new avenues of investigation at Enceladus and other bodies that display evidence for cryovolcanic processes, such as Ceres or Jupiter’s moon Europa.