Morphology, Morphometry, and Distribution of Isolated Landforms on the Margin of Chryse Planitia, Mars

Oxia Planum is a clay-rich plain located on the boundary between Arabia Terra and Chryse Planitia, and will be the landing site of the ExoMars 2022 rover, ‘Rosalind Franklin’. The region is situated between the ancient, rugged terrain of the southern highlands, and the young, smooth plains of the northern lowlands; in effect, the area acts as part of a transitional zone between the two hemispheres of the planet. Distributed across the Oxia and Circum-Chryse regions are thousands of kilometre-scale isolated landforms that resemble terrestrial mesas, buttes, hills, and plateaus (Figure 1). As a widespread geomorphological feature in this highland-lowland transitional area, they are important in the geological history of the region, but their origins are not well understood and are not yet documented. This study investigates the morphologies and distributions of the mounds in order to improve our understanding of their mode of formation and place in the regional stratigraphy. 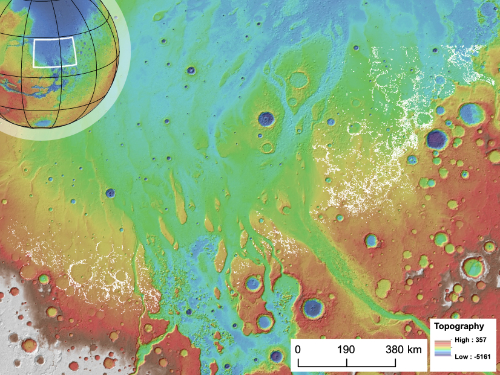 14,346 mounds were identified and investigated within a study area of ~500,000 km2 using an HRSC (High Resolution Stereo Camera; Jaumann et al., 2007) and orthorectified CTX (Context Camera; Malin et al., 2007) base map that was incorporated into an ArcMap GIS (Geographical Information Systems) environment. The mounds were identified by manual inspection and were distinguished from subjacent plains by their characteristic high albedo and low thermal inertia. Mound margins and prominences (such as peaks and plateaus) were identified by their visible morphology and were digitised by hand. A circular buffer of 100 m radius was generated around mound apexes, and a 200 m buffer generated around the lower mound margin in order to accurately capture the relief of the surrounding topography. Mound height was determined by extracting the maximum elevation of the mound tops and the mean elevations of the surrounding plains from the MOLA PEDR (Mars Orbiter Laser Altimeter Point Experimental Data Records) (Zuber, 1992) and the HRSC Digital Terrain Model (DTM) raster data sets.

Mounds are classified into four categories: (1) Hills have a single prominent peak or smooth crest (Figure 2a). (2) Mesas have a single plateau at its maximum elevation (Figure 2b). (3) Clustered mounds are instances where multiple hill peaks or mesa plateaus are juxtaposed, but the gap between them does not reach the elevation of the surrounding plains (Figure 2c). (4) Compound mounds are when hills or mesas appear to be vertically stacked on top of one another, forming distinct tiers (Figure 2d). MOLA and HRSC-derived measurements reveal that the heights of the mounds increase with areal extent, up to a maximum of ~500 m, after which the height does not increase further. This maximum height limit is reached when mounds have an area of ~10km2 in area (Figure 3). 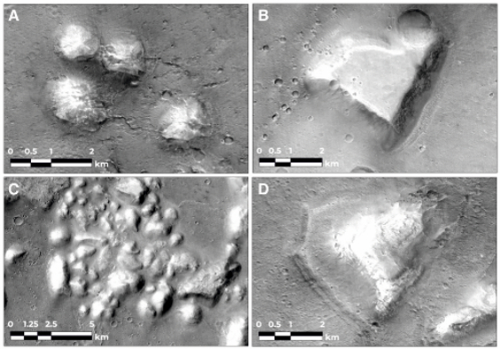 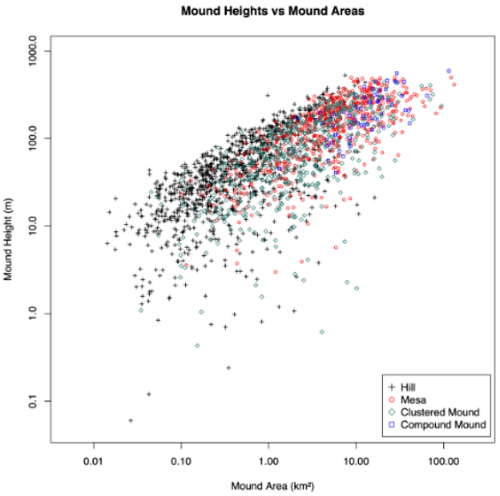 Figure 3: Graph showing the relationship between height and area for 2366 mounds of different classes.

Mounds with clear, regolith-free margins show compelling evidence for being mantled and embayed by the dark plains material mapped as the HNCC1 and HCC2 units by Tanaka et al. (2005). They therefore predate the Late-Noachian to Early-Hesperian emplacement of these units. In the Oxia Planum region, the mounds directly overlie the Early Noachian (Quantin-Nataf et al., 2020) clay-bearing units. This suggests that the mounds were deposited—and partially eroded—between the Early and Late Noachian.

The morphology and morphometry of a given mound are an expression of its erosional condition (Figure 3). Hills, with their rounded appearances, have the lowest average heights and have clearly been eroded more than the flat-topped mesas, which include some of the tallest mound examples. Compound mounds are intermediate in both morphology and height, suggesting that they represent a transitional erosional state between hills and mesas, and that the population represents the remnants of an eroded layer. The population of mounds extends several hundred kilometres into the northern lowlands, implying that the layer the mounds formed from (if this is their origin) once covered a substantial amount of the northern lowlands, proximal to the dichotomy boundary.

Many of the mounds in the study area occur in curvilinear or ring-like arrangements, which are suggested to demarcate the location of underlying buried craters (Rodríguez et al., 2007). The preferential occurrence of mounds around the edges of buried impact craters implies that these areas were commonly more resistant to the erosion that created the mounds’ present-day relief. We suggest that these crater margin-delineating mounds are the result of post-impact hydrothermal/groundwater activity that exploited pre-existing impact-generated fractures. This process would have reinforced the material directly above the fractures through the precipitation of minerals that increased the mechanical competence of the superimposing ‘mound’ layer. Subsequent differential erosion then removed the non-indurated material, leaving arcuate patterns of mounds above crater-edges. Many mounds do not occur in arcuate patterns. We attribute these to localised fractures in the underlying bedrock that acted as individual conduits for fluid flow, or to craters that have had most of their mounds buried or removed through erosion.

Through studying the morphology, morphometry and distribution of mounds of Chryse Planitia we show that: (1) We have identified 14,346 mounds in the south Circum-Chryse region. The mounds can be divided into 4 classes, hills (isolated, rounded top), mesas (isolated flat topped), clustered mounds (non-isolated hills or mesas) and tiered mounds (stacked mesas and hills). (2) The height–area relationship of the mounds plateaus at a maximum of ~500 m. Combined with the observation of the degree of erosion of different mound morphologies, this result suggests that the mounds formed from at least one layer that was regionally extensive in the past. (3) The local distribution of mound-associated buried impact structures supports hydrothermal activity as part of the preferential preservation process.