How plants will grow on the Moon where gravity is six times lower than Earth´s gravity? That simple question was the origin of Green Moon Project (hereafter GMP) early in 2016. Since then, the GMP team has been working in a very intense way to provide a scientific, technical and consistent answer. Gravity on Earth is 9,807 m/s^2 while on the Moon is 1,622 m/s^2. Therefore, the team was expecting to have a faster plant stem growth on the Moon than on Earth because of the gravity difference at the same time interval. GMP objective is to determine how the germination of a seed and subsequent growth of the plant stem under the effects of lunar gravity would be, providing a consistent response in astrobiological and
spatial topics with the capability of developing its own scientific instrument. The project importance is that it can provide knowledge on the plants growth and the plant physiological consequences under the effects of lunar gravity. It will help to achieve important goals like oxygen production, carbon dioxide removal, food production in future human bases on the Moon (as proposed by the Moon Village concept established by the European Space Agency) and on Mars [1, 3, 4].

The GMP is developed by using different facilities in United Kingdom (Wrexham Glyndwr University), China (laboratories of the Center of Space Exploration at the University of Chongqing) and Spain. In this latter country, we are using the laboratories of the Instituto de Geociencias of Spain (IGEO) located in Madrid and Lanzarote (Canary Islands). In fact, the tests in Lanzarote are very important due to the recognized relevance of the archipielago as lunar and Mars analogue [5, 6] Among other geological features, the basaltic composition, the good preservation of Lanzarote and the lava tubes are extremely important aspects to be considered with regards to the future experiments. ()

Instrument: The GMP prototype (Figure 1) has O2, CO2, temperature and humidity sensors together with a camera (which is designed to take pictures every 8 hours to help plant growth measurements) and a LED illumination system with blue, red and far red which are the colours from the light spectrum that allow the photosynthesis without having natural sun light (avoiding to depend on Lunar daylight). A seed release system is also developed. 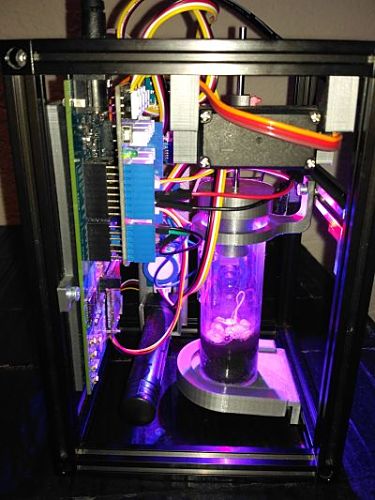 Plant sprouts on an extraterrestrial body for first time ever on January 3rd 2019 thanks to the Lunar Micro Ecosystem mini self-sustaining biosphere experiment aboard China’s Chang’e-4 lander (the first ever biological laboratory to land on the Moon) [1, 2]. The experiment was composed of air, water, nutrients, potatoes, Arabidopsis plant seeds, and silkworm eggs. The intention was that the silkworms would hatch and produce carbon dioxide which the potatoes and Arabidopsis seeds would absorb, emitting oxygen that would then help the silkworms. But intense cold quickly killed the organisms [1]. The Chinese capsule, an insulated aluminum container, has a diameter of 173 mm and height of 198,3 mm. The weight is 2,608 kg. It has a water bump system, seedbed and a live-streamed camera inside, and its own energy supply on the far side of the Moon. It is pressurized to sea level Earth pressure with a standard Earth atmospheric composition.

Due to similarities between this latter instrument and GMP capsule, both teams started a collaboration to joint efforts and resources. After the agreement achieved, both GMP and chinese teams collaborate to improve a joint instrument. Besides the systems from the original GMP capsule, the Spanish team will also include technical knowledge related to: plant growth measurement system, capsule temperature control system (to achieve an average temperature to allow the plant life avoiding the -233ºC to +123ºC difference temperature on the Moon) radiation measurement system and image taken system together with mirrors to achieve a wider perspective of the capsule interior. On the geological side, Earth soil and simulant of Lunar regolith as well as some field and IGEO lab experimentations at Lanzarote and Chinijo Islands UNESCO global geopark and Corona lava tube. On the biological side, Polycarpaea Robusta together with many other recommendations are provided [6].

Summary: it will be possible to obtain scientific knowledge related to how Lunar gravity affects plant growth as well as cosmic radiation does too. This will head to understand in more detail how to naturally protect from cosmic radiation and how to grow plants on the Moon or Mars for crops (food), O2 production and CO2 removal. This will support the Moon Village concept and future human missions to Mars. Aknowledgements: The GMP counts with the Cabildo of Lanzarote and Lanzarote UNESCO Geopark supports.