One of the key elements in our search for extraterrestrial life is the availability of liquid water. Mars has been our primary target for finding life in the last decades, and the search for ancient life signs, possibly ideal terrains is still popular. In the history of the Red Planet there were presumably wetter periods [McKay et al., 1991], however on the surface of modern Mars there is little chance for the prolonged existence of larger water bodies. Theoretical models show a chance for ephemeral appearances [e.g. Brass, 1980, Kereszturi et al., 2009, Knauth and Burt, 2002, McEwen et al., 2014], while computational model results imply a microscopic scale (especially brines) emergence [e.g. Kossacki, 2008, Martínez and Renno, 2013, Möhlmann, 2004]. In this abstract we show the first results of our new research estimating the likelihood for surface perchlorate deliquescence on Mars.

We simulated the surface temperature, atmospheric pressure and water vapor volume mixing ratio for Mars year 29 using the LMDZ GCM detailed in Hourdin et al. (2006), which is the second generation of the climate model developed in the LMD described in the works of Sadourny et al. (1984) and Forget et al. (1999). From the output of the model we calculated the relative humidity with respect to ice and with respect to liquid detailed in Pál et al. (2020). There is a chance for deliquescence if both the temperature and the relative humidity with respect to liquid are above the calcium-perchlorate (Ca(ClO4)2) salt-specific threshold [Toner et al., 2014]. According to the research of Rivera-Valentín et al. (2018) if the relative humidity with respect to ice greatly exceeds 1, nucleation is favored rather than brine formation. Using this method we estimated the possibility of deliquescence on a binary scale, where 0 means no chance and 1 means definite chance. 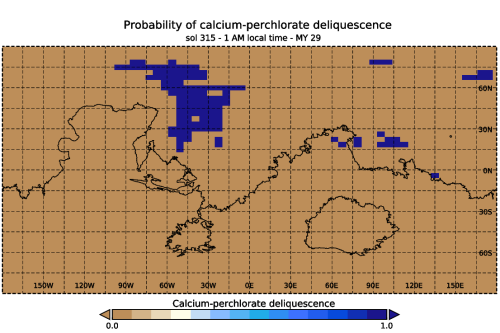 The possibility of deliquescence on a binary scale at 1 AM local time on sol 315 (the middle of northern summer). There is a larger area around Acidalia Planitia, where we see definite chance between the late northern spring and early northern autumn. We see a less defined, but persistent probability in the southern region of Utopia Planitia. This is a snapshot from the annual studies. 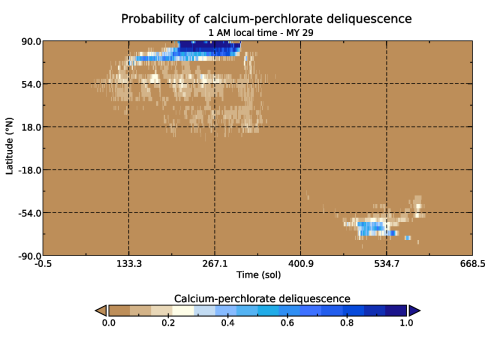 Averaged probabilites of calcium-perchlorate deliquescence through the Mars year 29 at 1 AM local time. There is a rather consistent possibility between Ls 120 - 315 in the northern hemisphere, as well a during the southern summer (Ls 450 - 550) in the southern upper latitudes.