Stars born in clusters are subject to frequent stellar flybys and so are their planets. The influence of an encounter reaches beyond the brief flyby itself in that the mutual forcing between the planets will continue to shape the planetary system in the long term and in a way that is impossible without the encounter in the first place. As a consequence, different planetary systems of different orbital scales and mass ranges behave differently as a result of the encounters.

Here we study the encounters between two planetary systems where each star has its own planets using N-body simulations. Besides the immediate effect of the encounter, we have also propagated the systems post-encounter for up to 10^8 yr. See Figure 1 for an illustration. 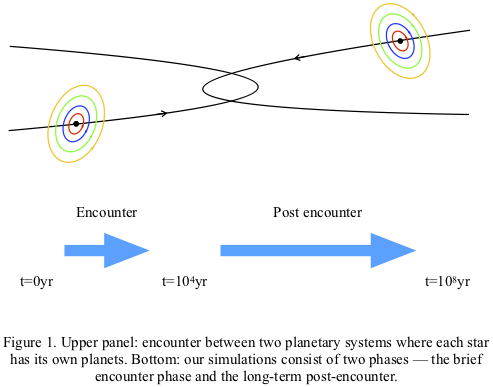 We find that immediately during the encounter, a planet can be ejected from its original host star. Here, the interplanetary interactions are negligible and a planet’s stellar-centric distance is a key factor. Only encounters closer than a few times that distance can cause strong disturbances, e.g., to eject the planet or to break the resonance in multi-planet systems. This means that close-in (<1 au) planets are, to a large extent, immune to such flybys and so are the orbital resonances among these planets because encounters as close as a few au are very rare. Wide-orbit planets, in contrast, are especially susceptible. Take the HR 8799 system for example; the odds for an encounter at 100s of au to disrupt the systems are still about 50%. Hence, wide-orbit multi-planet systems probably do not originate in dense clusters.

In unstable planetary systems, usually the less massive planets are lost; in systems of no mass hierarchy, all planets are equally vulnerable. Both interplanetary scattering and a stellar encounter can cause the loss of a planet in a multi-planetary system (Figure 2). We find that the encounters are in general gentler in the sense that the outer planet can be instantly ejected without disturbing the inners much, leading to a lower eccentricity distribution for the survivors. On the contrary, interplanetary scattering gives rise to significantly more excited systems. 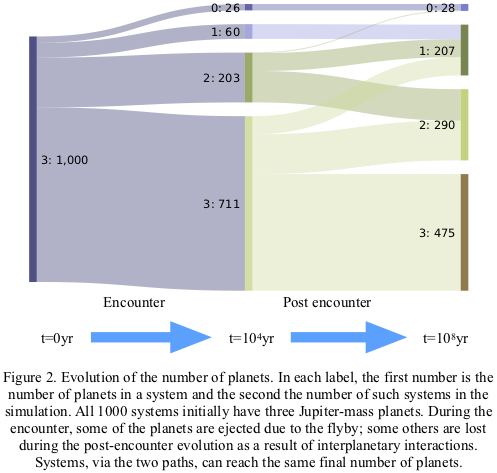 During the encounter, a planet can also be captured by the intruder. The captured planets intensify the post-encounter instability (Figure 3) of the planetary system of the intruder and they themselves are often lost. Otherwise, a massive captured planet on a wide orbit can tilt the inner tightly-packed original planets via the Kozai-Lidov mechanism. This creates a ``cold'' system with small eccentricities and low mutual-inclinations which as a whole highly is inclined with respect to the equator of the central star. Finally, the captured planets usually acquire highly-eccentric and -inclined orbits and half are retrograde. 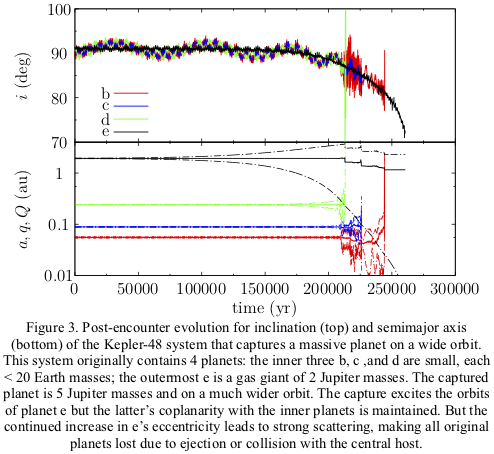 The authors acknowledge financial support from Knut and Alice Wallenberg Foundation (2014.0017 and 2012.0150) and from Vetenskapsrådet (2017-04945). The authors also thank the Royal Physiographic Society of Lund.