One of the most interesting aims for the study of exoplanets to understand under which conditions life could appear and survive in other environments. To be able to bear any form of life, “environments must provide extended regions of liquid water, conditions favorable for the assembly of complex organic molecules, and energy resources to sustain metabolism” (NASA Astrobiology Roadmap, Goal 1). To satisfy this requirement, specific physical and atmospheric conditions must be met. Those are extremely entwined with one another, so a quantitative assessment of the actual habitability of a planet is still hard to infer.

In this contribution, we discuss some self-consistent models of potential atmospheres of currently known terrestrial exoplanets, to understand which thermodynamic conditions would potentially allow the appearance of life on their surfaces. We also motivate how such theoretical projects should be linked with the reality of nature and future observations of exoplanetary spectra. We then specify the reasons why the theoretical determination of the spectral features that could be used to trace habitability (and life) is, therefore, essential now more than ever.

Exoplanetology is one of the most flourishing fields of astrophysics. At the time of writing, more than 4000 confirmed exoplanets have been discovered, and many are to be revealed with current and future facilities.

One of the most interesting revelations was the detection of an ever-growing population of terrestrial planets, up to ten times more massive than the Earth: the so-called Super Earths. Surprisingly, the Solar System is lacking planets belonging to this class, but they appear to be common around other main-sequence stars.

The only way for an astronomer to characterize an exoplanet is through remote techniques, such as the spectroscopic analysis of its atmosphere. Spectroscopic studies of the atmospheres of Super Earths are of paramount importance to probe their composition, which could provide hints about the formation of such planets, their evolution and the conditions under which life could form on their surfaces (see e.g. [1]).

This is not a simple task with the currently available facilities since the emitted or reflected radiation coming from a planetary atmosphere is orders of magnitude smaller than the one emitted by the host star. A new generation of ground- and space-based instruments (e.g. METIS at ELT [2,3], ARIEL [4], PLATO [5], and the LIFE Mission Initiative [6,7, see also the submitted contribution by Angerhausen et al.] is currently being developed and will be able to characterize hot and temperate Earth analogues in the next years/decades. Now more than ever, a theoretical approach to the study of atmospheres of terrestrial exoplanets is necessary, to provide cross-reference tools and to set the ground for the upcoming observations.

From the exoplanet catalogue Exo-MerCat [8], a sample of all currently known Super Earths was collected.

Choosing combinations of various chemical compositions and atmospheric pressures, a grid of nearly 2400 models was computed using the 1D radiative-convective code MAGRATHEA [9]. The output produced by MAGRATHEA is the radiative-convective equilibrium pressure-temperature profile of the modelled atmosphere, provided that the input physical and chemical parameters allow for the stability of the atmosphere itself.

The code treats the absorption of each atmospheric layer through the k-correlated distribution, which is much faster than the usual line-by-line approach. It, however, requires to calculate beforehand the k-correlated table, thus limiting the space of physical and chemical input parameters and, therefore, the atmospheres that can be modelled. The chemical database currently included in MAGRATHEA is composed of CO2, O2, H2O, and N2. From a physical point of view, MAGRATHEA can treat temperatures up to 500 K and pressures up to 100 atm. It is thus possible to produce self-consistent temperate and warm Mars- and Earth-like pressure-temperature profiles by solving the radiative transfer equation directly, with no need for prescriptions or parameterizations.

Most of these planets are within the inner boundary of the habitable zones of their host stars [10]: these targets are, in principle, unsuitable for the appearance and survival of life on their surfaces. The presence of an atmosphere could, however, mitigate the effect caused by the higher irradiation these planets receive from their host stars -- compared to the one the Earth receives from the Sun. Hence, simulating a wide range of atmospheres for each of the selected targets is useful and informative to obtain a better understanding of the actual habitability of these terrestrial exoplanets.

We show the success rate of the models for the chosen targets in a stellar temperature vs irradiation plot (Fig. 1) and the normalized frequency of habitable, cool, or warm atmospheres for the successful models (Fig. 2).

As visible from Fig. 1, many models did not converge, due to the high temperatures that caused either too much water vapour to be produced, or that exceeded the 500 K threshold imposed by the look-up table. However, despite the irradiances being much higher than what prescribed by the standard definition of the habitable zone, some combinations of atmospheric parameters would result in surface temperatures for the selected targets that would, in principle, allow liquid water to exist on their surface (Fig. 2).

Albeit in this extremely simple form, this study has proven useful to assess quantitatively the effect that the atmosphere has on the habitability of an exoplanet, paving the way for future simulations and observations. 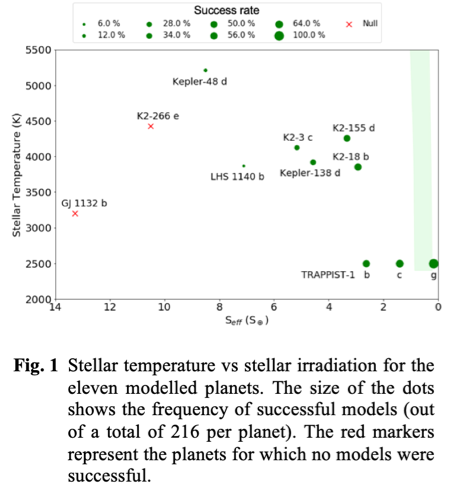 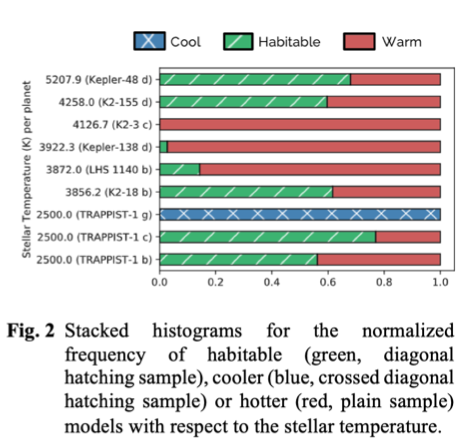