Is the DS Tau disc hiding a planet?

Recent high resolution and high fidelity observations of protoplanetary discs are showing us peculiar substructures such as spirals, gaps, rings and horseshoes. In particular recent surveys have shown that the majority of these discs are characterised by rings and gaps. What can we learn from these features? Are these discs hiding planets? I will present the results we have obtained in order to model one specific disc orbiting around DS Tau, an M-type star, in the Taurus star-forming region located at a distance of 159 pc. This disc is showing a wide gap (∼30 au) in the continuum at 1.3 mm (Long et al. 2018) and at 2.9 mm (Long et al. 2020) (left panels of Fig. 1).

We performed 3D-hydrodynamical (PHANTOM, Price et al. 2018) and radiative transfer (MCFOST, Pinte et al. 2006, 2009) simulations in order to reproduce the observed gap shape at 1.3 mm. In this modeling, we assumed that the observed gap is carved by a planet between one and five Jupiter masses. We fit the shape of the radial intensity profile along the disc major axis varying the planet mass, the dust disc mass, and the evolution time of the system. In the central panels of Fig. 1 we show the synthetic images, that have been computed for our best fit model (performed on the 1.3 mm case) parameters: Mp=3.5 MJup, Mdust=9.6*10-5 Msun and t=145 orbits. The right panels compare radial cuts of the flux intensity profile along the disc major axis obtained from the synthetic image at 1.3 and 2.9 mm (top and bottom center panel of Fig. 1) with the ALMA data (top and bottom left panel). The left (blue) and right (red) side of the radial cut correspond to the left and right side of the disc major axis. Dot markers represent the data, while the models are in dashed lines.

We also computed the CO-isotopologues channel maps for the best model fitting the dust continuum (see Fig. 2 for an example), in order to study the expected signature of the planet in the gas kinematics.

We found that the planet mass fitting the ALMA image is 3.5 Mjup and that this planet would be able to produce a kink detectable by ALMA with a reasonable beam size and velocity resolution. 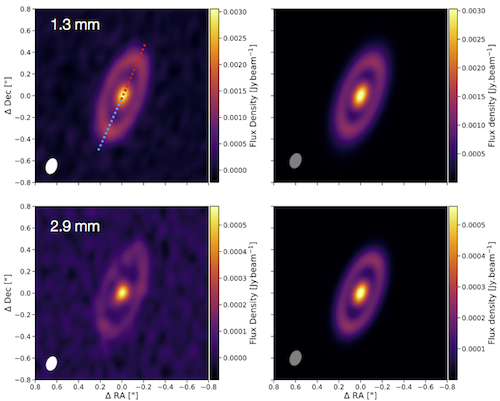 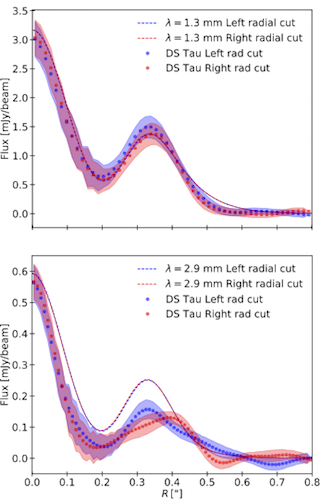 Figure 1. First row: ALMA observation (left panel) and continuum mock image (center panel) of the DS Tau disc at 1.3 mm. The synthetic image has been computed for our best fit model Mp=3.5 MJup and Mdust=9.6*10-5 Msun). The Gaussian beam we take to convolve the full resolution image has been chosen to reproduce the observations reported by Long et al. (2018) and Long et al. (2020), respectively 0.14''x0.1'' and 0.13''x0.09''. In the 1.3 mm image we highlight in blue the left side of the major axis and in red the right side. Right panel shows the comparison between the left (blue) - right (red) side of the radial cut along the disc major axis for the data (dot marker) and the modeling (dashed line). Second row: Same as first row but for the 2.9 mm continuum image. 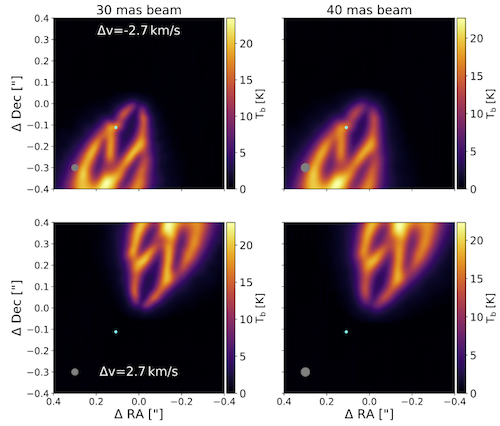 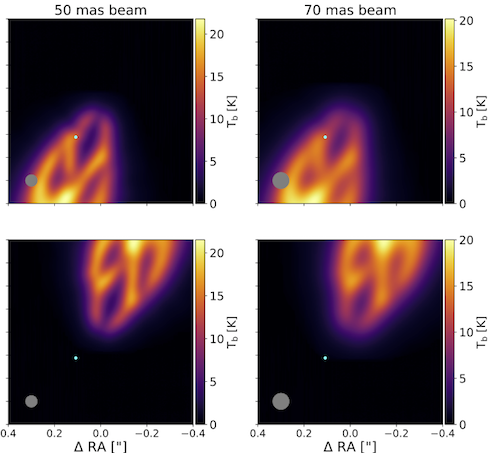