NASA’s OSIRIS-REx mission set out in September of 2016 to survey and sample the near-Earth asteroid (101955) Bennu. During observations of Bennu, mission scientists observed centimeter-scale pebbles ejecting off the surface of the asteroid [1]. Many of these particles have been observed to follow hyperbolic trajectories, and the intersection of the orbits of Bennu and Earth suggests the possibility of particle flux at Earth [2]. We simulate the evolution of the motion of particles ejected from Bennu with a focus on potential meteor activity at Earth.

We developed a complex simulated environment that accounts for the most potent perturbing gravitational bodies and solar radiation forces that are applicable to our centimeter-scale size range [3]. We use REBOUND, an orbital integration API developed by Hanno, Rien and Tamayo [4], augmented with REBOUNDx, developed by Tamayo et al. [5], to include solar radiation pressure and Poynting-Robertson (PR) drag. Bennu is modeled as a massless object, though great care is spent ensuring Bennu’s orbital accuracy as the particles are integrated towards well-defined close approaches in the near future [6]. Contrary to most meteoroid stream evolution studies, our simulations release particles from Bennu at a regular cadence (600 grams per week) throughout its orbit to resemble mission observations.

To test the accuracy of the model and integrator, we prepared test cases for expected behavior. Recreating examples of particle resonance traps due to PR drag confirmed the implementation of the non-gravitational forces. Observations of the particle stream circularization (Fig. 1) and associability over time were also indicative of expected behavior. Additionally, planetary bodies were initialized from a JPL ephemeris (DE 431) and continuously compared to these values as a reference. The modeled solar system maintained an accuracy of 10-1 to 101 arcseconds of mean anomaly for their expected positions, giving us confidence in our methods.

Towards the main objective of observing Earth-particle interactions, limitations in processing power and time encourage us to run simulations at particle production rates lower than the mass loss observed at Bennu by a factor of 100. Earth-particle close approaches are recorded annually during simulations. These data are later converted into stream density estimates and Earth impact probabilities through analysis on the B-plane [7]. This formalism enables the calculation of the statistical likelihood of impact with Earth for all of the particles produced in the simulation over the 348 years of interest (1788–2135); the years over which Bennu’s position is best constrained [6]. Such results now inform our conclusions on zenith hourly rate flux measurements at Earth.

This work will be of practical importance for professional and amateur astronomers searching for Bennuid meteors. While the exact particle production mechanisms are still open to debate, we are hopeful that this initial work can be generalized to encompass the entire near-Earth asteroid population. This work, together with additional particle ejection observations and analyses from the OSIRIS-REx mission, will pave the way to a full understanding of this astronomical phenomenon. 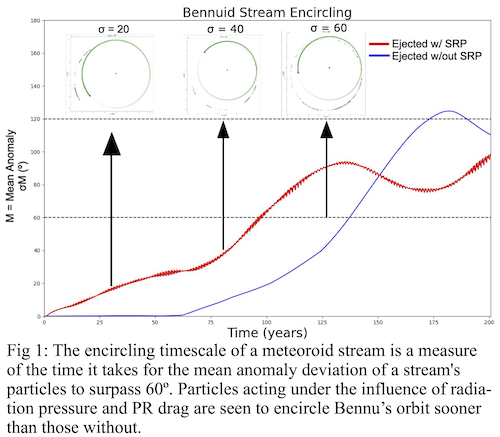 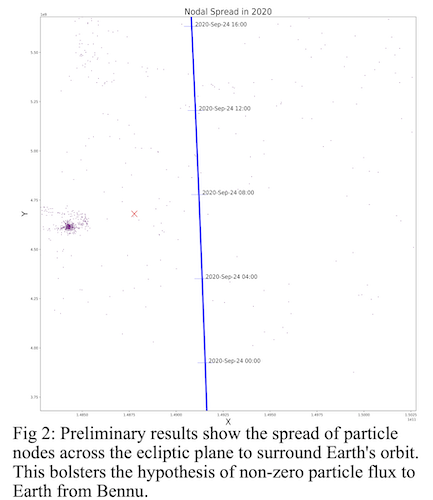