During twilight, when the sun is below the horizon, clouds and atmospheric dust can still be illuminated by the sun if they are high enough over the surface, as they escape the shadow of the planet. Observations of this direct illumination can be used to determine the minimum altitude for elevated features. While this is a rare phenomenon on Earth, it is a common occurrence on Mars, where clouds and aerosols can usually reach high altitudes in the mesosphere. Twilight clouds were first observed on Mars by ground-based telescopes, and then by cameras on the Viking orbiters. However, in the last few decades of Mars exploration, most orbiters have been placed in sun-synchronous orbits centered around the afternoon [1], and thus few observations of the twilight have been collected.

Mars Express (MEX) is an excellent platform for the study of twilight clouds due to its non-sun-synchronous orbit, The Visual Monitoring Camera (VMC) [2] onboard MEX hasas a wide Field of View (FOV) that allows regular observations of the full disk of Mars (usually including the region in dawn) from the apocenter of the MEX orbit [3]. The current VMC dataset includes ~50 000 images distributed across ~3000 observations (each observation consisting of several consecutive images), covering 8 Martian Years. We have developed a pipeline to perform a the systematic study of twilight clouds in VMC images. As VMC is a broad-band imager, it is not yet possible to properly study the composition of clouds, as the camera cannot distinguish spectroscopically between water ice, dust or CO2. Therefore for simplicity, we use the word “cloud” to refer to these elevated features, regardless of their actual composition.

We show some examples of twilight clouds in Figure 1. We find three main groups of twilight clouds in a belt around 45ºS. These three groups correspond to the regions of Terra Cimmeria, Terra Sirenum, and Aonia Terra, where the clouds appear mostly in the southern winter. Additionally, some of the highest clouds we find correspond to these regions. It is worth noting that an extremely high altitude plume was observed, also at dawn, and around the southern winter solstice, over Terra Cimmeria [6].

Whilst we find that these twilight clouds are more common during the Aphelion Cloud Belt season (ACB)[4], the latitudinal distribution of clouds differs from that of the ACB, as the biggest concentration of twilight clouds happens in a belt around 45ºS, while the ACB is more or less symmetrical around the equator [5]. This may be explained by the fact that VMC observations are mostly in the early morning, while most ACB studies have been focused on the afternoon [1]. Our results are biased by the fact that we only detect isolated clouds at some altitude over the surface, and that might also be part of the explanation for this discrepancy. 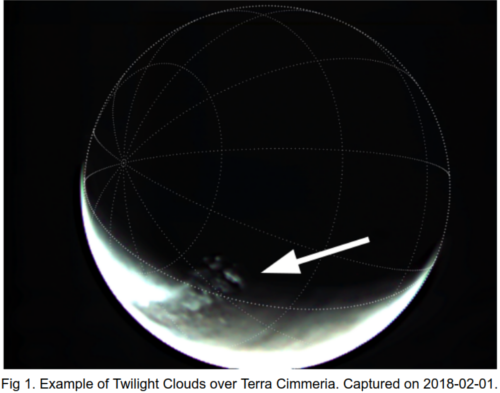