We revisit the long-standing problem of melt generation in impacts on terrestrial planets. Traditionally, estimates of melt volumes are derived by semi-analytical models and parameterized results from hydrocode simulations that account for melt generation due to the impact-induced shock (e.g., Bjorkman and Holsapple 1987, Pierazzo at al. 1997). These so-called scaling laws take the form of a power law that connects the melt volume with impactor diameter and velocity as well as the densities of impactor and target and the internal energy of melting, which are assumed constant. While this is a valid assumption for small impacts, which encounter an essentially homogeneous target, it becomes problematic if impact-related length scales such as the depth of penetration or the size of the shocked volume approach the length scales on which the properties of the target change substantially (e.g., Miljković et al., 2013; Potter et al., 2015). On even larger scales, decompression melting can contribute significantly to melt production if the change of target properties with increasing depth is substantial (e.g., the target temperature approaches the solidus [Manske et al., in revision.]). The contribution of plastic work to melt production should also be taken into account in impact scenarios with impactor speeds lower than 15 km/s (Kurosawa and Genda 2018,  Melosh and Ivanov 2018).

We revisit this problem with a set of generic models of terrestrial planets in which we consider the interdependencies between certain properties of the target planet, impact parameters, and the characteristics of impact melt production. We calculate the radial thermal structure of the target planet by employing parameterized thermal evolution models that account for partial melting of the mantle and crustal growth (Tosi et al., 2017, Grott et al., 2011) and consider the heat transport in both stagnant lid and plate tectonics regimes. This leads to a heterogeneous structure of the target that we evaluate at different times and use as initial condition for the fully dynamical model of the impact itself, which is calculated with iSALE (e.g., Collins et al. 2004, Wünnemann et al. 2006). To accurately calculate impact-induced melt volumes, we developed a Lagrangian tracer-based method that accounts for the generation of impact-induced melt by shock-heating as well as decompression and plastic work due to material deformation and displacement in the course of crater formation. By these means we explore the dependence of melt production on impactor size and velocity as well as target temperature, which in turn depends on the temporal evolution of the mantle's Rayleigh number and hence on its depth and gravity. The latter in turn is a function of the mass of the target planet, which also influences the impact velocity and thus the depth of penetration of the impactor. While the models are derived for generic planets ranging in size from Moon-sized objects to super-Earths, they are also applied to planets of our Solar System, in particular Mars. 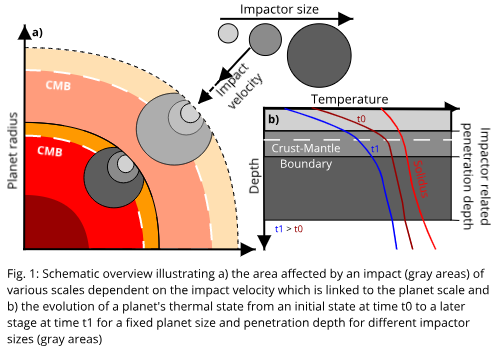 The ultimate goal is to find a comprehensive representation of these complex interdependencies. Furthermore, we aim to narrow down parameter ranges where scaling laws represent melt production satisfactorily and indicate in which scenarios target heterogeneities or melting due to decompression or plastic work affects the overall melt production significantly.

Wünnemann, K. et al. (2006): A strain-based porosity model for use in hydrocode simulations of impacts and implications for transient crater growth in porous targets. Icarus, 180(2), 514-527.