Performing radio astronomy observations from the Earth’s surface is plagued with interference issues. The Earth and its surrounding atmosphere, particularly our ionosphere, are massive sources of natural interference. There are also human sources of interference. There have been several studies attempting to solve the issues surrounding radio observations. One such solution is to find radio-quiet zones, such as the far side of the Moon. In his article "Farside explorer: unique science from a mission to the farside of the moon" David Mimoun states that the Moon is "the most radio-quiet environment in near-Earth space." [1] The far side of the Moon is insulated from Earth's various interference sources. This certainly makes it a great candidate for radio astronomy. [2][3]

Due to the rotation and orbiting speed of the Moon, the same side of the Moon is always facing Earth. However, the building of a radio antenna array on the Moon and operating it would be costly. Therefore, tests must be prepared on Earth in advance. These tests are performed with the EuroMoonMars project. Using the Radio Jove receiver with dipole antennae, Solar and Jovian observations will be performed. These observations can be compared with data from other radio telescopes and arrays. This would allow radio astronomy to be tested both as a concept and as a prediction tool for solar weather. Even though the Earth is protected by our atmosphere, the Earth is affected by solar weather. [4] The near side of the Moon will be affected by solar weather and this could be predicted and diagnosed by radio instruments.

During the COVID-19 pandemic and lockdown, observations have been carried out in Bray, Ireland and at The European Space Technology and Research Centre (ESTEC) and Leiden in the Netherlands. These locations are all at similar latitudes. Further observations are planned in Iceland. The EuroMoonMars is launching the CHILL-ICE campaign in 2021 and radio observations will be an integral research topic. Experiments will be carried out to determine the angular response and efficiency of the apparatus in a volcanic region. The rest of the EuroMoonMars CHILL-ICE team deserve thanks for their support of these experiments.

The Earth-based apparatus contains a single dipole, the Radio Jove receiver and a laptop to receiver processed data. The experimental methods can be defined as follows: 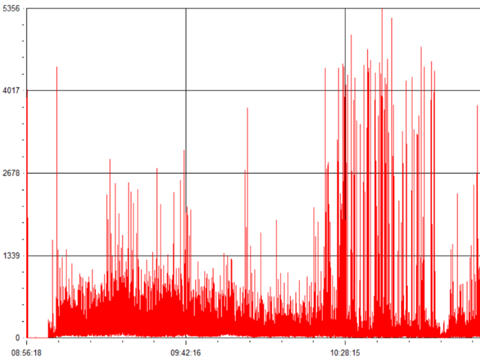