What is the initial reservoir of mass available for making planets? This key question for planet formation got even more relevant when the measured masses of the Class II disks (1-3 Myr old) were found consistently smaller than what is needed for the formation of gas giant cores. One way to solve this conundrum is to investigate whether the disks at the younger stages contain enough dust. Should planets be formed earlier, in the first 0.5 Myr, the physical conditions and chemical composition assumed of the beginning of planet formation needs to be revised.

We use Atacama Large Millimeter/submillimeter Array (ALMA) observations of embedded disks in Perseus molecular cloud together with existing Very Large Array (VLA) data to provide a robust estimate of disk masses and to compare the Perseus survey of dust masses with other ALMA surveys of young and mature disks. The combination of the two interferometric facilities observing at different wavelengths enables detailed characterization of the dust emission from young disks. Our best estimate of the median dust disk masses is 158 M⊕ (Earth masses) and 50 M⊕, for Class 0 and Class I respectively. These values are much higher than the median found typically in Class II disks (~5 M⊕) (Fig. 1). In Fig. 2 we show that the masses typically found in exoplanetary systems are well in a range of masses available in Class 0 and Class I.

Our results are most consistent with the starting point of the planet formation already in the Class 0 stage, first 0.1 Myr after the beginning of the star and disk formation process. This has major implications for the physical and chemical conditions of the formation of extrasolar planets and of our own Solar System. 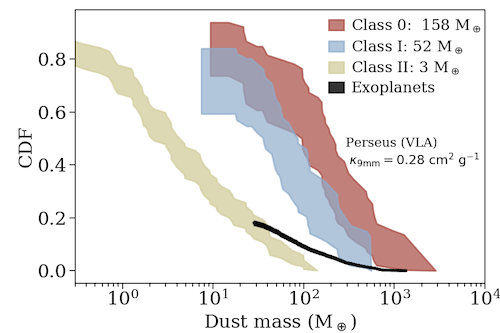 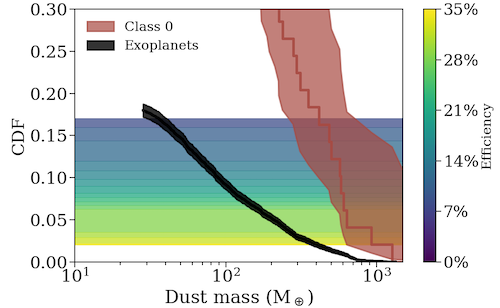 Fig. 1. Cumulative distribution function of dust disk masses and solid content of exoplanets. Top: Cumulative distribution function of dust masses for Class 0 (red) and Class I (blue) disks in Perseus and Class II disks (yellow) in Lupus measured with ALMA (Ansdell et al. 2016). In black, the masses of the exoplanet systems are normalized to the fraction of the gaseous planets (Cumming et al. 2008). Perseus disk masses calculated with κ9mm=0.28 cm2g−1 from the VLA fluxes. Medians are indicated in the labels. Bottom: Zoom-in to the ranges where exoplanets are present. The color scale shows the efficiency needed for the planet formation for a given bin of the distribution. 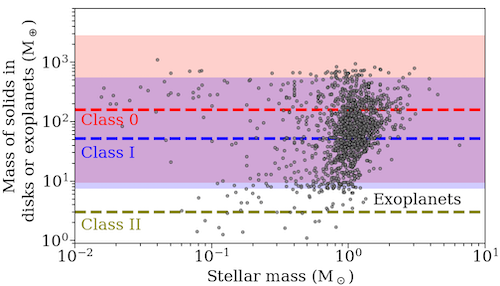 Fig. 2. Plot showing the distribution of masses of exoplanetary systems obtained from the exoplanet.eu catalog (Schneider et al. 2011), for planets around main-sequence stars with the measured masses. Shaded areas mark the range of our best estimation of the dust disk masses in Perseus: Class 0 (red) and Class I (blue) calculated from the VLA fluxes with the opacity value of κ9mm=0.28 cm2g−1. Medians of the distributions, 158 and 52 M⊕, for Class 0 and I, respectively, are indicated with the dashed lines. The median mass of the Class II disks in Lupus, 3 M⊕ (Ansdell et al. 2016) is shown in yellow. The masses of the solids in exoplanetary systems are plotted against the stellar mass of the host star. All planets with available information on the mass are included in this plot.