During the 2019-01-21 lunar eclipse a lunar impact flash was observed by more than 20 observing sites, and two published estimates were made as to the location of the impact flash. In this work we present the preliminary results from the utilising PyNAPLE (Python NAC Automatic Pair Lunar Evaluator) with these coordinates in the search for the resultant impact crater. In total, 97 surface changes were detected, two of which being definite impact craters; however evidence suggests that they were formed during separate events to the 2019-01-21 impact.

Lunar impact flashes been observed at least 600 times across both professional and amateur observation campaigns[1,2,3]. Despite this large amount of data, there are still unknowns when examining the relationship between the impact flash and the resultant impact crater. The most important unknown being the luminous efficiency, which determines the ratio of incoming kinetic energy converted to light, currently taken as between 10-2 and 10-4 [4]. Another unknown is to do with accuracy of crater scaling laws, which estimate the size of the formed impact crater but are derived from high energy impact tests, which become inaccurate for smaller impacts such as the most common lunar impacts [5].

In order to obtain ground truth data for refining of scaling laws, and further examination of luminous efficiency, PyNAPLE [6] is utilised to locate the resultant crater from hundreds of observed lunar impact flashes. The results discussed here are from a single search performed on the 2019-01-21 lunar impact flash, which coincided with the lunar eclipse and therefore had a number of analyses and location estimates performed [7,8].

Using images from the Lunar Reconnaissance Orbiter Narrow Angle Camera (LRO NAC), a temporal pair (a pair of 'before' and 'after' images) can be divided highlighting changes between the two images. This process requires a number of constraints to be met, such as illumination angles being within 10o of each other, and being nadir pointing. This limit the number of pairs that can be formed for any location, especially as the events become more recent having less potential 'after' images.

Using PyNAPLE, an exhaustive search can be performed forming each temporal pair in an area around the event location. This allows the identification of new surface features formed between the temporal pair images, which with adequate coverage locates the crater formed during the impact.

The search for the 2019-01-21 crater was performed using literature values, and values calculated by AUGUR [9] (Table 1). Due to the lack of overlap between the coordinate estimates, a search area encompassing the coordinate ranges was used.

During PyNAPLEs ~350 computing hours search, 235 images were evaluated. After eliminating unsuitable images, this left 100 before and 30 after images. In total 108 temporal pairs were formed, and 97 confirmed surface changes identified (Fig. 1). The majority of these changes were small 'splodges' of darkened regolith due to impacts below the resolvable size for the LRO NAC, or ejecta deposits from nearby impacts. Two of the identified changes were clearly identifiable as impact craters (Fig. 2). 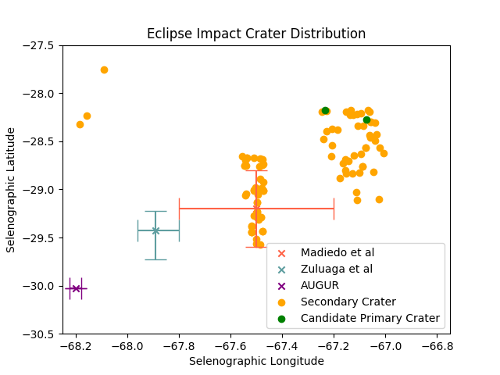 Figure 1: The locations of identified changes for the 2019-01-21 impact flash compared to coordinates in literature. 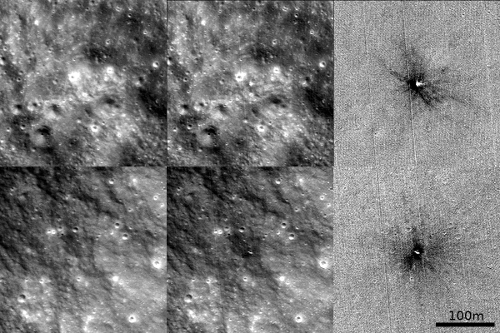 While two confirmed impact craters were formed in the general area the impact flash was observed, it is suspected that these impacts are unconnected to the 2019-01-21 impact flash. This conclusion is drawn from a number of reasons; the main disqualifying factor is that the impacts are >6 standard deviations outside the coordinate ranges given by all three sources, and are outside the extent visual extent of the flash. For either of these to be the resultant crater, this would indicate that the impact flash originated above the lunar surface, for which there is no known mechanism that could sufficiently explain an elevated flash origin.

Another factor implying no link is the fact that a large gap exists between the latest before images (2015-10-27) and earliest after images (2019-09-25), leaving a 1429 day uncertainty on when these craters were formed, the majority being before the 2019-01-21 event, indicating that they had likely already formed.

The third factor is that, as seen between Figures 1 & 3, the distribution of detected impacts does not cover the entire search area. This is due to a lack of temporal pairs that could be formed, with the majority of temporal pairs overlapping one another. This led to coverage of only 30.5% of the search area, and is therefore P≈69.5 that the true primary impact resides within the unsearched area. Until further images are released from LRO NAC providing further temporal pair coverage, locating the primary crater is impossible. 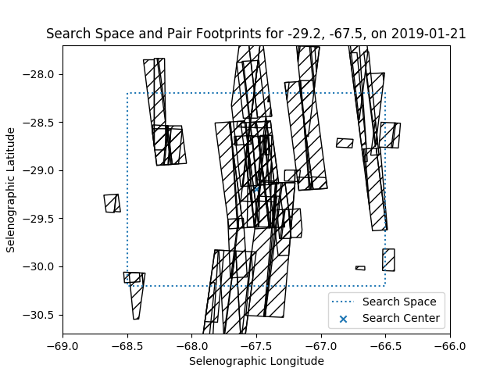 The method of temporal pair formation by PyNAPLE for impact flash events is being applied to both the publicly available NELIOTA impact flashes, and impact flashes detected by lunar monitoring at Aberystwyth University, UK, and Université Côte d'Azur, France. Further to this, as new images are released from LRO NAC, events such as the 2019-01-21 impact flash can be assessed for new coverage.