The surface of Pluto is dominated by the Sputnik Planitia basin, possibly caused by an impact ~ 4 Gyr ago. To explain basin's unlikely position close to tidal axis with Charon, a reorientation driven by the post-impact uplift of the subsurface ocean was proposed recently. To maintain the reorientation until today, relaxation of the ice/ocean interface topography has to be sufficiently slow. Here we study the thermo-mechanical viscous relaxation of Pluto's ice shell of uneven thickness. We show that for a pure H2O ice shell the topography relaxes quickly (~ tens of Myr). On the other hand, if a layer of methane-clathrates is present at the base of the ice shell, the relaxation is much slower. With at least 5 km of clathrates, the ice/ocean interface topography can be maintained for 4 Gyr.

Pluto, the largest dwarf planet in the Kuiper belt, is probably differentiated into a rocky core and a hydrosphere [9]. Its surface is dominated by the enigmatic Sputnik Planitia basin, which has likely been produced by a giant impact. The basin that covers about 7 % of Pluto's surface is located very close to the Charon tidal axis. To explain this unlikely position, [7] suggested that it may be the result of a whole body reorientation, which requires the crater to be a positive gravity anomaly. Isostatic uplift of the subsurface ocean was thus suggested to compensate the crater's negative gravity and an observed nitrogen layer [6] at the crater's surface to provide the positive signature necessary for the reorientation. However, it is not clear whether the ice/ocean interface topography is stable on long time scales. Here, we study the thermo-mechanical viscous relaxation of Pluto's ice shell of uneven thickness.

We solve thermal convection of ice in 2D cartesian geometry with time-evolving bottom boundary (interface with the ocean). The initial height of the ice/ocean interface is evaluated assuming Airy isostasy and a 6 km deep basin at surface. The governing equations are following:

Free surface is prescribed at the bottom boundary and free slip is prescribed elsewhere. Temperature is fixed at the top and bottom boundary (40 and 265 K) and the side boundaries are kept thermally insulating. The initial condition is steady-state conductive profile. In some simulations, a layer of methane-clathrate [4] of thickness hc is assumed. We use strongly nonlinear viscosity for ice dependent on temperature, grain size and stress using the composite law [2], and similarly for clathrates [1]. As a result, the viscosity of clathrate layer is at least one order of magnitude higher than the viscosity of ice immediately above. We prescribe temperature dependent thermal conductivity for ice [6] that gives values of 2.3 to 13 Wm-1K-1 at the ice/ocean interface and surface respectively. In the clathrate layer of thickness hc we prescribe constant thermal conductivity of 0.6 Wm-1K-1 [10]. We use the Arbitrary Lagrangian-Eulerian formulation to adress the moving boundary [8]. The problem is implemented in freely available Finite Element Method library FEniCS [5].

We performed series of simulations with ice shell thickness h=150 km and clathrate layer thickness hc= 0, 5 and 10 km. The initial height of the ice/ocean interface topography is 87 km and grain size is d=1mm in all simulations.

Figure 2 shows the temperature (top) and viscosity (bottom) in the ice shell with hc=10 km after 100 Myr of relaxation. The insulating layer of clathrates at the ocean interface leads to significantly colder ice shell than in the case without clathrates. Therefore, the viscosity is also very high and no significant relaxation is observed. 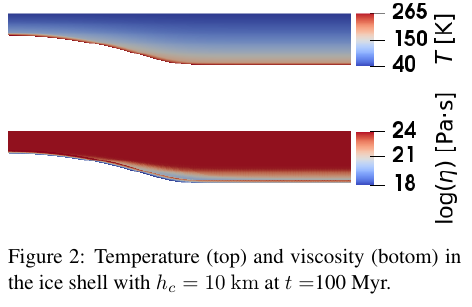 We investigated the thermo-mechanical viscous relaxation of Pluto's ice shell using a numerical model with moving boundary. We showed that if Pluto's ice shell is made of pure H2O ice, the ice/ocean interface topography cannot be maintained for longer than a few tens of Myr. If an insulating layer of methane-clathrates is present at the ice shell/ocean interface, it may significantly delay the topography relaxation.

Future study will take into account a more realistic initial temperature condition resulting from the impact. In such case, one might expect that the effect of clathrates would be reduced and the relaxation would proceed faster. These results will be presented at the meeting.