Transit observations of exoplanets, although suffering from detection and geometrical biases, indicate that there are several intra-system trends in the architecture of Planetary Systems (PS). According to one such collection of trends, exoplanets tend to be similar and ordered in their size/mass, and are evenly spaced with respect to their adjacent neighbour [1-4]. Additionally, smaller planets tend to be closely packed, while larger planets tend to have large orbital spacing. These trends are collectively referred to as ‘peas in a pod’. Given these trends, two branches of questions emerge: Are these trends astrophysical in origin or a result of detection biases? and If astrophysical, what do they imply for our understanding of exoplanets?

In this contribution, we present our analysis of the ‘peas in a pod’ trend for the PSs simulated with the Bern Model. The Bern Model is a theoretical model of  planet formation and evolution [5]. The model tracks the growth of several planetary embryos (embedded in protoplanetary disk) and their subsequent formation and evolution into PSs [6]. The synthetic PSs are analysed by a computer code KOBE (Kepler Observes Bern Exoplanets) [7]. KOBE simulates transit survey of exoplanets and adds the geometrical and detection biases of Kepler.

Restricting the sample to multi-PSs, by applying the same selection cuts as [4], leads to a population of KOBE-Multi PS (KMPS). This can now be compared with the observed multi-PSs, the ‘CKS-Multis’ (CKSM) catalogue [4] The peas in a pod trend is analysed in the synthetic PSs by measuring the correlations present in the sizes, masss, spacing and packing of adjacent planets. For size and mass, the Pearson/Spearman correlation tests are performed on the radius and mass of adjacent planets. For spacing, the correlation tests are done on the period ratio of adjacent pairs of planets. For packing, the average size of a planetary pair is compared with the period ratio of these two planets.

To sum up, our findings indicate that the Bern Model shows trends similar to the observational peas in a pod trend. In this contribution, the astrophysical origins of these trends are explored and their implications on our knowledge is suggested. 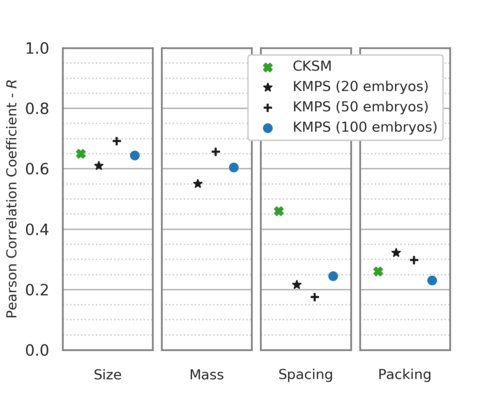 Figure 1. Comparison of correlations present in observed multi-planetary systems (CKSM) and theoretically simulated planetary systems (KMPS). The strength of correlation is measured by the Pearson Correlation coefficient R, plotted on the y-axis. The 4 panels show the correlations present in planetary size, mass, spacing and packing. Since, transit observations do not provide planetary masses, correlation in mass for CKSM is not available. Overall, we note that there are remarkable similarities and understandable differences in the theoretical and observed populations.