We present preliminary results of a numerical study of tidally induced deformation of Enceladus’s ice shell containing fissures (Tiger Stripes) in the south polar region (SPR). It is a follow-up study of Souček et al. (2016), which brings in a more realistic description of the faults' behavior. In particular, the fault zone is described by a model of effectively visco-elasto-plastic material with yield stress depending on the stress state. Such a model mimics the Coulomb-type friction contact at idealized fault surfaces. We show the basic features of the model and discuss the importance of fault description on the predicted tidal deformation and stress field within Enceladus's ice shell.

In Souček et al. (2016), we have numerically demonstrated a profound effect of faults (Tiger Stripes) on the tidally induced deformation and stress fields in the south polar region of Enceladus. In Běhounková et al. (2017), we showed how this effect can be further enhanced in a synergetic way, when combined with a realistic thinning of the ice shell in the SPR for a shell thickness model based on inversion of gravity and libration data (Čadek et al., 2016). In both these studies, the faults were modelled as zones with significantly reduced elastic moduli. Effectively, such description corresponds to faults being described as narrow slots partially filled with water (compensating the overburden pressure within the layer). Such description of the faults is oversimplified since it does not take into account any friction at the faults. We attempt to circumvent this deficiency in the new study.

We solve equations of deformation of a 3D Maxwell visco-elastic planetary shell containing faults in the SPR. The shell's deformation is driven by the incremental tidal potential and at the fault, Coulomb, type response is considered. The Coulomb-type friction is mimicked by a continuum model of a fault zone of finite thickness with stress limiting viscosity. The stress limiter is given by the yield stress, composed of (hydro)static contribution due to overburden pressure and a dynamic contribution due to normal stress variations during the tidal period.

We present preliminary results with one active fault in the SPR, corresponding to the Baghdad Sulcus. In Figure 1, we plot the displacement in SPR for four instants during the tidal period, colors indicate the amplitude of normal displacement, vectors show the horizontal displacement. Compared to the case with frictionless faults, the model with Coulomb-type friction exhibits asymmetry - the lateral motion is facilitated during the opening phase and suppressed during the closing (compressional) phase of the period. 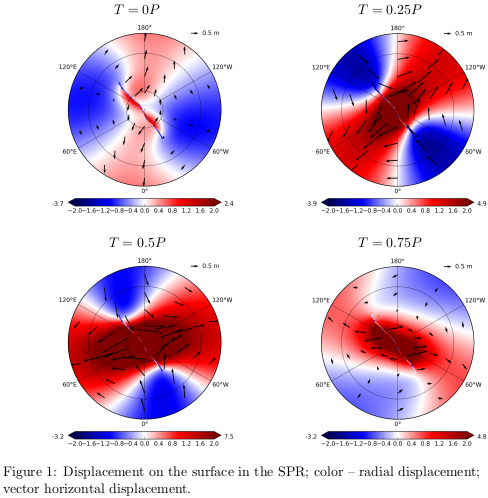