This session focuses on outstanding questions on the environments of the moons of outer planets: including the neutral particles (e.g. torii, atmospheres, exospheres, and plumes), electromagnetic fields, dust and plasma, and the interaction of the moons with their environments. Abstracts on all outer planet moons are welcome, including those of Jupiter and Saturn (e.g. Europa, Ganymede, Enceladus, Rhea, and Titan) and the not-well explored moons of Neptune and Uranus.

Prior developments in this field have lead to significant discoveries (e.g. subsurface oceans) and have given rise to new open questions (e.g. active plumes on Europa). Considering the unprecedented opportunity to study these subjects with the upcoming ESA’s JUICE and NASA’s Europa Clipper missions it is essential to bring together the space community on this topic. This session is important to maximize the scientific output of past and current missions, in support of the future missions.

The plasma interaction with Io’s atmosphere results in at least a ton per second of escaping neutrals. Most of these neutrals supply extended neutral clouds along Io's orbit  and eventually become ionized and accelerated to corotation with Jupiter, populating the Io plasma torus as well as spreading out to fill Jupiter’s vast magnetosphere. About half to two-thirds of the plasma torus ions charge-exchange with the extended neutral clouds  and leave the torus as energetic neutral atoms, passing Europa’s orbit. Energetic neutrals are also produced directly in the plasma-atmosphere interaction, escaping with sufficient speed to reach Europa’s orbit before being ionized. The iogenic ions that are accelerated to high energies in the middle magnetosphere ultimately move back inward, again crossing Europa’s orbit. We present estimates of the fluxes of these various iogenic populations and how much oxygen, sulfur and sodium might be hitting Europa.

Such energetic proton depletions can be caused by the precipitation of these particles onto the moon's surface or charge exchange with the neutral atmosphere. In order to interpret the depletion features in the EPD data, a Monte Carlo particle tracing code has been developed by (H. L. F. Huybrighs et al., 2020; Hans L. F. Huybrighs et al., 2017; Hans Leo Frans Huybrighs, 2018). The expected flux of the energetic ions is simulated under different scenarios, for three Galileo flybys of Io (I24, I27, and I31), including with and without an atmosphere and inhomogeneous magnetic and electric fields. By comparing the simulated distribution to the EPD data, the cause of the depletion features can be investigated.

The following causes of energetic proton depletion near Io are identified:

Furthermore, latitudinal and longitudinal dependencies in the atmospheric models for Io are investigated for all three aforementioned flybys.

Introduction:  Telescopic and spacecraft observations of the surfaces of Jupiter’s icy moons have provided information on their composition, mostly from the spectral analysis of the reflected light [1-4]. The surfaces of these bodies are made of crystalline and amorphous water ice and several highly hydrated salty phases [1 – 9]. As several potential chemical composition are relevant for the surfaces of these moons, as much as for other bodies covered with hydrated salty phases, the laboratory work ongoing at the University of Bern intends to enlighten how different salts mixed with water ice in different ways affect the reflectance. We prepared several samples by mixing MgSO4, NaCl, MgCl2 and Na2SO4 with ices to better constrain how these components, thought to be present at global and/or local scale, can form hydrated phases depending on the preparation method, which roughly simulate processes for the production of renewed / pristine material at the surface of icy moons. The effects of the strong irradiation at the surface of Jupiter’s moons are also investigated.

Flash-frozen salty ices: Granular ices have been produced through a flash-freezing process by nebulizing droplets into liquid nitrogen [10] with the SPIPA setup from the University of Bern. This preparation process tends to simulate a production of particles through an active plume or geyser at, or close to, the surface. The water ice itself is not able to incorporate salt in its crystal lattice at ambient pressure, contrary to high pressure [11, 12]. Given the temperature of liquid nitrogen, particles solidify forming amorphous or glassy phases of salt and water. This process is described in other fields of science [13] and demonstrates to which extent a flash-freezing procedure generates highly complex particles, made of different phases, both amorphous and crystalline.

Slabs of salty ices: Starting from similar composition but simulating a slow freezing process, slabs of salty ices have been produced with different concentrations of salts, from low to saturated proportions (wt% of salt is varying in function of the salt). We identify the signature of different hydrates, regarding different salts, expected to form through slow crystallisation following their phase diagrams and thermodynamic equilibrium [14]. The ice itself has the time to expels salt from its crystal. This procedure could be more relevant for ice produced either inside “hydrological” analogues systems inside ice shells, or at the interface of the ice shell and the global salty ocean. By letting slabs samples sublimate slowly in vacuum, absorptions bands related to the hydrated phases appeared. 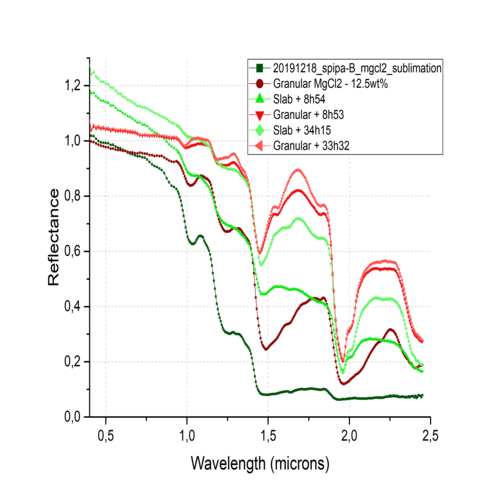 Figure 1 shows a comparison and evolutions between slabs (green) and granular ice (red) in the case of MgCl2. These samples have been produced from initial brines with 12.5wt% MgCl2. The differences observed between these spectra are in part due to the particles themselves, in terms of size as well as their production process, generating different hydrated phases and in different proportions.

Irradiated Ices: F and M-centres are well-known defects in alkali halides crystals [15], formed through electrons replacement in crystal lattice. Due to the coloration induced by this effect, the relevance of this process for the surface of Europa has been strongly suggested [8, 9]. We irradiated salty ices with energetic electrons of 1 and 5 keV, for 15 minutes. Generating a deposition of 1016 e-/cm2, equivalent of weeks to months at the surface of Europa. The ices were produced either from liquid solutions with different concentrations of NaCl (5, 10 and 30wt%) in intimate mixture or as inter-mixture (salt and water ice particles are mixed at solid state [10]). Figure 2 shows the different spectra of salty ices after e- irradiations; normalized at their reflectance value at 0.395 nm. The variations showed from one sample to another are due to their production procedure. The grain size, the concentrations in salt and the mixing process of water ice and salt (hydrated or not) are all playing a role in the resulting alteration of the analogue and will be detailed at the conference. 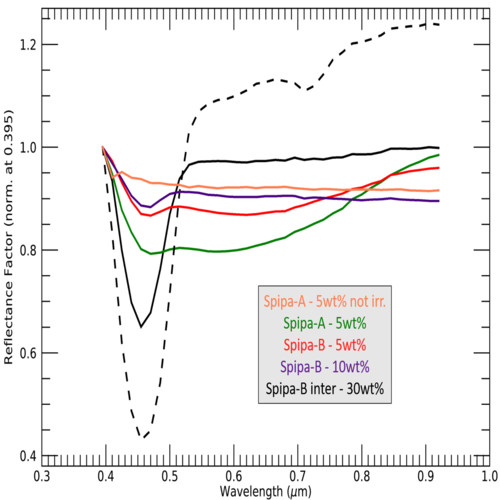 Figure 2: Reflectance spectra of irradiated ices containing 5  10 or 30 wt% of NaCl. Spipa-A and Spipa-B has respectively grains sizes of 4.5±2 µm and 67 ± 31 µm. The orange spectrum is of a non-irradiated ice containing 5wt% of NaCl. The electron irradiation has been conducted at the energy of 1keV, except for the black dot spectra, at 5keV.

This work demonstrates the major influence of the production method on the spectroscopic properties of salty ices prepared as analogues for the surfaces of the icy moons. Simulating irradiation conditions occurring at the surface of the icy moons reveals puzzling differences between the behaviours of different samples. New series of experiments are conducted to understand the systematics behind these behaviours. Once validated, spectral data will be distributed through the DACE and SSHADe platforms (https://dace.unige.ch/lossySearch/ ; https://www.sshade.eu/db/bypass).

Acknowledgments: The team from the University of Bern is supported by the Swiss National Science Foundation and through the NCCR PlanetS.

Understanding how complex organic molecules (COMs) form, survive under space conditions and are then delivered to planetesimals in Solar-like systems is a key step to unravelling the origin of the life on Earth [1]. From dedicated laboratory studies it has become clear that the large molecular inventory observed in space cannot be formed efficiently in the gas phase. Interstellar dust grains provide surfaces on which gas-phase species can accrete, collide and react, and to which they can donate excess energy. Therefore, in dense interstellar clouds, icy dust grains act both as a molecular reservoir and as sites for catalysis [2]. For decades, surface complex molecule formation has been thought to be triggered largely by energetic processing, e.g. photon, electron and cosmic ray bombardment of ice dust grains [3]. Similarly, the rich inventory of molecules found by the Rosetta mission in the surface ices of comet 67P/Churyumov–Gerasimenko [4] and the increasing studies of composition of ices on planetary bodies (e.g. Saturnian and Jovian moons, Pluto, Charon and Kuiper belt objects) all suggest molecular synthesis by irradiation by ion bombardment. However, comprehensive laboratory studies of such ice analogues systematically exposed to a wide range of ions and energies remain fragmentary and often contradictory. Further laboratory work is therefore pivotal to our understanding of the chemical and physical processes in the ISM and on planetary bodies of the Solar System to interpret data from past, present and future space missions (e.g. JWST, JUICE).

At Atomki in Debrecen, Hungary, we have recently commissioned a new ion beamline dedicated to exploring the processing of complex molecular ices found in the interstellar medium and Solar System. It is a Transnational Access facility for the EUROPLANET 2024 Research Infrastructure Project and is therefore open to the international research community (https://www.europlanet-society.org/europlanet-2024-ri/ta2-dplf/ta2-facility-11-atomki-ice-chamber-for-astrophysics-astrochemistry-ica/ ). High current beams can be provided from H to a wide range of heavy ions with the kinetic energy of 0.2 – 20 MeV. The Ice Chamber for Astrophysics/Astrochemistry (ICA) at Atomki is designed to investigate the effect of ion irradiation of astrophysically relevant ices deposited on a series of cold substrates (20-300 K) vertically mounted on a copper holder connected to a closed cycle cryostat, a 360° rotation stage and a z-linear manipulator. The ice layers are created through background deposition of gases, both pure and mixed, which are prepared in a high vacuum dosing-line and introduced in the main chamber by means of an all leak metal valve not facing the sample holder. The ice structure can be crystalline or amorphous depending on the chosen temperature during deposition. The apparatus is currently being upgraded in order to study cold layers of more complex organic molecules produced by an effusive evaporator.

The ice composition grown on an infrared transparent substrate and the physico-chemical changes induced upon ion irradiation are monitored by a FTIR spectrometer in transmission mode. Using metallic substrates, reflection mode is also possible. Ions of different species and charge states mimicking the effects of cosmic rays and stellar wind are produced by a Tandetron accelerator. The ICA chamber is also equipped with an electron gun, which provides electron beams of a few microamps in the 5 eV – 2 keV energy range. Sequential and/or simultaneous irradiation by ions and electrons is an available option for studying radiation synergies. Temperature programed desorption (TPD) studies can be performed on both non-irradiated and irradiated ices. The desorbed molecules during irradiation and TPD experiments are monitored by a quadrupole mass spectrometer, while chemical and morphological changes in the ice can be followed “in situ” by using the FTIR spectrometer. At the conference, we will present the preliminary results of the e-, H+ and S2+ impact on pure methanol ice and some other ice mixtures deposited at 20 K as a function of a wide range of energies and beam fluxes. We will further discuss how the induced chemical changes strongly dependent on the studied parameters.

Acknowledgment Europlanet 2024 RI has received funding from the European Union’s Horizon 2020 research and innovation programme under grant agreement No 871149. The enthusiastic help from the Atomki Tandetron accelerator staff both in preparation and experiments is gratefully acknowledged.