In this session we address the question of the formation, dynamical evolution and stability of planetary systems in a broad sense, including the effects of planet-disc interactions, resonances, high eccentricity migration, binary stars,...

The discovery of seven Earth-sized planets around the ultracool dwarf star TRAPPIST-1 in 2017 brought a new type of planetary system to our attention. Modelling the planets of this system and considering new physical processes may result in a more realistic description of those exoplanets that are considered to be the most habitable ones. Similar planetary systems to the TRAPPIST-1 are expected to be discovered with current and upcoming missions, and in fact, recently, two Earth-sized planet candidates were announced around the ultracool Teegarden's Star (Zechmeister et al. 2019). Detailed modelling of similar exoplanetary systems will be an important task to reveal their astrobiological potential. Until new discoveries, the TRAPPIST-1 system serves as a prototype of an ultracool M dwarf with a planetary system of Earthlike planets. For this reason, studying the TRAPPIST-1 planetary system is a pioneering work that will help in the characterization of similar systems that are yet to be discovered.

The habitability of Earth-like exoplanets around M dwarfs is becoming the forefront of exoplanetary research as the TRAPPIST-1 system is recently in the centre of attention. Tidal heating may be an important effect influencing habitability, especially for close-in planets or moons. Close-in bodies quickly become tidally locked, but if their eccentricities are excited by periodic perturbing effects of other planets or moons in the system, then varying tidal forces keep causing friction inside the body that leads to continuous heat generation (Peale et al. 1979). Some studies suggest that tidal heating may enable the emergence of life in otherwise too cold environments (Scharf 2006, Dobos & Turner 2015, Forgan & Dobos 2016, Dobos et al. 2017).

Using a Maxwell viscoelastic rheology, we computed the tidal response of the planets using the volume-weighted average of the viscosities and rigidities of the metal, rock, high-pressure ice, and liquid water/ice I layers. After determining the possible interior structures, we computed the heat flux due to stellar irradiation and tidal heating for the inner four planets (Barr et al. 2018, Dobos et al. 2019). We found that planet e is the most likely to support a habitable environment, with Earth-like surface temperatures and possibly liquid water oceans. Planet d also avoids a runaway greenhouse state (in which it would irreversibly lose all of its surface water content), if its surface reflectance is at least as high as that of the Earth. Planets b and c have heat fluxes high enough to trigger a runaway greenhouse and to support volcanism on the surfaces of their rock layers. Planets f, g, and h do not experience significant tidal heating arising from the star, and likely have solid ice surfaces with possible subsurface liquid water oceans.

We also connected dynamic evolution of planetary orbits with interior structure considerations for the inner two TRAPPIST-1 planets (Brasser et al., 2019). Based on stability considerations, and with the assumption that orbital resonances are lasting for planets b and c, lower limits can be determined for their k2/Q tidal parameter. This parameter can further be constrained by the planets' interior structure which determines their tidal dissipation. Although the two approaches gave different results, well-constrained tidal parameters will improve the realism of orbital evolution simulations including tidal effects.

Recent Kepler data has shown that the radius distribution of small, close-in exoplanets is bimodal. Such bimodality was expected from photoevaporation models of close-in super-Earths, where some planets are stripped of their primordial H/He atmospheres, whilst others retain them. We present a hierarchical inference model on the distribution of Kepler planets using the photoevaporation evolution model. This approach is used to place key constraints on the planetary distributions for core composition, core mass and initial envelope mass-fraction, as well as test other models of planet evolution such as core-powered mass-loss. This new information has interesting implications on planet formation models and also hints at additional atmopsheric mass-loss mechanisms.

NASA's TESS mission is expected to discover hundreds of M dwarf planets. However, few studies focus on how planets form around low-mass stars. We aim to better characterize the formation process of M dwarf planets to fill this gap and aid in the interpretation of TESS results. We use six sets of N-body planet formation simulations which vary in whether a gas disc is present, initial range of embryo semi-major axes, and initial solid surface density profile. Each simulation begins with 147 equal-mass embryos around a 0.2 solar mass star and runs for 100 Myr. We find that planets form rapidly, with most collisions occurring within the first 1 Myr. The presence of a gas disc reduces the final number of planets relative to a gas-free environment and causes planets to migrate inward. Because planet formation occurs significantly faster than the disc lifetime, super-Earths have plenty of time to accrete extended gaseous envelopes, though these may later be removed by collisions or a secondary process like photo-evaporation. In addition, we find that the final distribution of planets does not retain a memory of the slope of the initial surface density profile, regardless of whether or not a gas disc is present. Thus, our results suggest that present-day observations are unlikely to provide sufficient information to accurately reverse-engineer the initial distribution of solids.

The probability p1 of a collision of one planetesimal, initially located near the second exoplanet, with the first exoplanet was 0 in most calculations for both series. For the second series, p1 about 0.01-0.02 at amin=1.2 and amin=1.3 AU. For the first series, only at i2=e2/2=0.05 rad and eb=0.15 the values of p1 were considerable and could exceed 0.1 at time T=10 Myr, i.e. they were much greater than the fraction (less than 10-5) of planetesimals from the zone of the giant planets collided with the Earth [8].

The work was carried out as a part of the state assignments of the Vernadsky Institute of RAS and was supported by the grant on exoplanets of the Russian Ministry of Education and Science.

Cr, Ni and Fe abundances trace the process of core-mantle differentiation. While Cr and Ni are both siderophilic (iron-loving), their exact abundances relative to Fe in both the core and the mantle depend on the conditions under which core-mantle differentiation occurs. We present a novel modelling approach in which we use observations of Cr, Ni and Fe found in exoplanetary bodies to deduce the conditions under which these bodies differentiated. These observations come from white dwarfs which have been polluted by the accretion of planetary material.

A white dwarf is the compact remnant of a low mass star. They are stratified by their high surface gravity, such that the observable part of their atmosphere is typically pure H and/or He. Heavier elements sink through the atmosphere on short timescales (Koester 2009). However, we observe many white dwarfs whose atmospheres appear to be ‘polluted’ with such elements (e.g. Eisenstein et al. 2006, Hollands et al. 2017).

The remarkable implication is that material from substellar bodies, which have survived their host star’s main sequence lifetime, is being scattered on to white dwarfs (Farihi et al. 2010). These bodies range from asteroids (Jura 2003) to ice giant planets (Gänsicke et al. 2019).

Polluted white dwarfs therefore provide us with a unique opportunity to learn about the interiors of exoplanets and exoplanetesimals. Furthermore, we can gain insights into their formation histories, including core-mantle differentiation. This process occurs in rocky bodies throughout the solar system, from Earth and Mars to smaller objects like Vesta (De Sanctis et al. 2012). Polluted white dwarfs allow us to investigate whether this is also true of exoplanetary systems.

Some white dwarfs appear to have accreted relatively high amounts of elements such as Fe and Ni (e.g. PG0843, Gänsicke et al. 2012). These elements are siderophilic and on Earth are mostly found in the core. This is evidence that the pollutant originated in a body which underwent core/mantle differentiation. Collisional processing led to a core-rich fragment being scattered towards the white dwarf. The corollary of this observation, mantle-rich fragments enriched in elements such as Mg and Ca, has also been observed (Melis & Dufour 2017). Hollands et al. 2018 found that differentiation is a feature of exoplanetary systems based on the large proportion of polluted white dwarfs enriched in Ca or Fe relative to Mg. Bonsor et al. 2020 concluded that, given the improbable nature of observing signatures of differentiation, at least 60% of all polluted white dwarfs have accreted fragments of differentiated bodies.

Partitioning behaviour of Chromium and Nickel

The process of core-mantle differentiation does not always play out the same way, with different elements preferentially partitioning (i.e. moving) into the core or mantle to different extents depending on factors such as pressure, temperature and oxygen fugacity. The partitioning behaviour of Chromium and Nickel is determined by laboratory experiments. Studies such as Wade & Wood 2005, Corgne et al. 2008 and Fischer et al. 2015 subject a metallic starting material to high pressures and temperatures, inducing differentiation. The behaviour of each element can then be parameterised.

Chromium and Nickel exhibit evidence of different partitioning behaviour in the solar system. Relative to the Earth’s core, Mars has a core enriched in Nickel and depleted in Chromium, and vice versa for the mantle and crust. This trend is consistent with differentiation at lower pressure (and hence lower temperature) and higher oxygen fugacity (Yoshizaki & McDonough 2020).

Chromium and Nickel are significant because not only do they display potentially detectable partitioning trends, but they have also been detected in the atmospheres of several white dwarfs. We aim to use these elements to constrain the formation conditions of white dwarf pollutants, and compare to pollution theories.

Bonsor et al. 2011 proposed a pollution scenario in which a white dwarf companion, distant enough to survive post-main sequence stellar evolution, scatters material from an exo-Kuiper belt towards the white dwarf. This theory predicts that the pollutants are small objects, and might be expected to display signatures of low pressure differentiation.

We consider nine white dwarfs where Fe, Ca, Mg, Cr and/or Ni have been detected (Hollands et al. 2018). We aim to explain the observed abundances using a novel partitioning model, providing a best-fit core fraction for the accreted fragment and determining the conditions under which differentiation occurred. In particular, we constrain the pressure and oxygen fugacity. This builds on the work of Harrison et al. 2020 and allows us to provide crucial insights regarding the size of the parent bodies of the white dwarf pollutants. 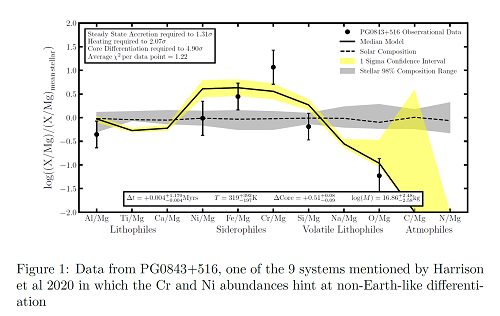