Astrobiology is the study of whether present or past life exists elsewhere in the universe. To understand how life can begin in space, it is essential to know what organic compounds were likely available, and how they interacted with the planetary environment. This session seeks papers that offer existing/novel theoretical models or computational works that address the chemical and environmental conditions relevant to astrobiology on terrestrial planets/moons or ocean worlds, along with other theoretical, experimental, and observational works related to the emergence and development of Life in the Universe. This includes work related to prebiotic chemistry, the chemistry of early life, the biogeochemistry of life’s interaction with its environment, chemistry associated with biosignatures and their false positives, and chemistry pertinent to conditions that could possibly harbor life (e.g. Titan, Enceladus, Europa, TRAPPIST-1, habitable exoplanets, etc.). Understanding how the planetary environment has influenced the evolution of life and how biological processes have changed the environment is an essential part of any study of the origin and search for signs of life. Major Space Agencies identified planetary habitability and the search for evidence of life as a key component of their scientific missions in the next two decades. The development of instrumentation and technology to support the search for complex organic molecules and the endurance of life in space environments is critical to define unambiguous approaches to life detection over a broad range of planetary environments.

This session welcomes abstracts from several scientific domains such as prebiotic and interstellar chemistry, micropaleontology, limits of life, habitability, and biosignature detection.

The environmental conditions on present-day Mars are detrimental for life as we know it; however cumulative evidence suggests that early Noachian Mars (~ 4 billion Ga) had a warmer climate with a denser atmosphere1 capable of supporting surficial liquid water, and providing protection from UV and cosmic radiation. It is possible, therefore, that early Mars could have been hospitable for microorganisms.

While cellular degeneration is a rapid process following cell death, microorganisms do leave behind molecular clues as to their existence, or biosignatures, such as the lipid molecules that previously comprised their cell membranes. Each group of microorganisms leaves behind a distinct lipid “fingerprint” that is relatively resistant to harsh environmental conditions and can be preserved over geological timescales2.

Various robotic and remote-sensing missions have confirmed the presence of salt deposits (e.g., chlorides, sulfates) at the late Noachian to late Hesperian (~ 4 to 3.5 Ga) boundaries of present-day Martian deposits. In particular, bulk enrichments of calcium and magnesium sulfates have been reported in the Hesperian (~ 3.3–3.7 Ga) sedimentary rocks of Gale crater3, which indicate the previous presence of widespread liquid water on Mars. On Earth, such salts have been found to harbour and protect microbial life for a prolonged period, possibly over millions of years4, thus evaporite sequences provide a compelling target for life detection, as putative biosignatures could be preserved5.

Currently, the beneficial or deleterious effects of sulfate chemistry on the preservation of organic matter, especially under biologically destructive modern Martian conditions is not well constrained. Given the prominent presence of sulfates on the surface of Mars, this work explores whether sulfate minerals can act as viable substrates for the long-term preservation of lipids, when exposed to Mars-like radiative and atmospheric conditions, and aims to determine whether those signs of life can be explicitly detected.

To carry out this work, we use a combination of analogue fieldwork and laboratory-based simulation studies. Microorganisms isolated from a magnesium sulfate-rich analogue site (Basque Lake) and other terrestrial early Mars analogues, will be entombed within artificial sulfate crystals by evaporating an experimental brine under low atmospheric pressure and UV radiation similar to that encountered on the surface of Mars using The Open University’s Mars chamber facility. The lipids within the samples will be extracted and derivatized to make them amenable to by pyrolysis-gas chromatography-mass spectrometry (py-GC-MS); py-GC-MS is an important component of the Sample Analysis at Mars (SAM) instrument suite onboard NASA’s Mars Science Laboratory (MSL) and of the Mars Organic Molecular Organizer (MOMA) on the ESA’s Rosalind Franklin (ExoMars) rover. This work will aid in characterizing the impacts of the simulated Martian environment and Martian mineralogy on the preservation and detection of lipid biomarkers within sulfitic evaporite deposits and will inform the robotic missions targeting the search for ancient signatures of life on Mars.

For this poster I will be presenting the approaches taken to produce synthetic spectra for molecules believed to be biosignatures. In astrochemistry, biosignatures describe a group of molecules which could be produced by life and therefore act as an indication of it. Naturally, by being able to identify these molecules it will be possible to screen exoplanets for the possibility of harbouring life.

Recently, Seager, Bains and Petkowski (2016) produced a catalogue of possible biosignatures, which totalled above 14,000 molecules. There are groups such as the ExoMol group which model these molecules at extremely high precision. However, due to the large number of molecules, a high precision method would take an unreasonable amount of time and therefore a faster means of producing spectra is required. The work shown within is designed to be quick and produce data for the full rovibronic spectrum rather than selected bands. I will show that anharmonic corrections are needed to be able to simulate qualitatively correct ro-vibrational transitions. In my method, this is done by implementing TOSH, transition optimised shifted hermites, which was first detailed by Lin, Gilbert and Gill (2007). Finally I will be presenting my latest results using this analytical anharmonic approach.

Searches for the past and present life on the planetary surfaces will be involving multilevel characterisation of the planetary rocks and soils within potentially habitable environments. Some up to three billion years old stromatolites or fossilised bacterial colonies are particularly interesting. They are found on the Earth and thought to be earliest life forms preserved within the terrestrial sedimentary rocks and can be a benchmark for searches of bio-relevant objects on planetary surfaces. By combining the microscope-camera system and mass analyser one can identify micro-fossilised material within the rocks by means of specific morphological details and characteristic chemical composition. We discuss the results of the studies on ancient microfossils obtained by space-born instrumentation, microscope-camera system combined with laser mass spectrometer. Both, the microscope imaging and chemical analyses can be conducted with micrometre spatial resolution. We demonstrate that the morphological record is helpful but not sufficient to identify bio-relevant material. Yet, while combined with elemental and isotope and with help depth profiling method, the compositional analysis can distinguish between abiotic and biological nature of the material. Detection of biosignature in measurements of fossilised materials with a miniature laser ablation ionisation mass analyser.

1. On the Greenland Ice Sheet

Ice sheets form as a consequence of the progressive deposition of snow on a landmass. As snow falls and metamorphoses into ice [1], particles follow pathways towards the ice margin, such as shown in Fig 1 [2]. As a result, in the summer the older ice layers are exposed in the ablation zone (that is, the marginal region where the previous year’s snowfall has sublimated or melted entirely).

Along the margin of the Greenland Ice Sheet (GrIS), surface melting exposes a visible stratigraphy with variable dust content. An example of this is shown in Fig 2 [3], pictured at Kronprins Christian Land (North-East of GrIS). 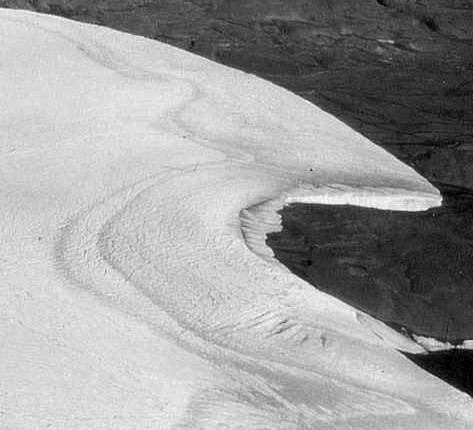 Figure 2 Exposed stratigraphy (ice/dust) on the margins of GrIS at Kronprins Christian Land. Photography reproduced from [3].

By conducting δ18O measurements on the exposed ice, [3] and [4] have identified the low-dust (clearer) ice to the left in Fig. 2 as being Holocene and the high-dust (dirty) ice close to the margin as pre-Holocene ice.

Another way to study the dust layers on the GrIS is to drill ice cores [5]. This technique allows us to characterise the size and shape of dust trapped within the ice and to match it with the contemporary climate [5, 6].

Layered deposits of ice and dust cover the Martian poles. These Polar Layered Deposits (PLD) have been mapped from orbiters, revealing a stratigraphy thought to be linked with changes in the orbital parameters of Mars [e.g. 7]. PLD are in some places exposed, which allows us to study their reflectance [8, 9].

Reflectance models, such as the widely-used model developed by Hapke [10], are tools that allow us to retrieve the amount of dust present within a surface from its reflectance spectrum.  It has been shown that this model only reproduces the reflectance of an ice and dust mixture accurately if the size and shape of the dust grains are well known [11]. Without knowledge of those two parameters, the errors made in the modelling of the reflectance of dust and ice mixtures are expected to be decisive.

We propose to use our knowledge of the characteristics of the dust in the Greenland ice sheet to calibrate Hapke’s reflectance model as follows:

This exercise will allow us to assess the performance of the reflectance model when it comes to fit reflectance spectra obtained from satellite imagery. By doing so, we aim to evaluate how accurately we can derive dust concentrations from the Martian PLD using similar approaches.

This work has been carried out within the framework of an Early.Postdoc Mobility granted by the Swiss National Science Foundation.

Dallol volcano area, proposed as a Mars analog, is considered one of the most extreme environment on Earth. It is located in the Danakil depression, a tectonically and volcanically active region in Ethiopia. The hydrothermal springs that compose the system discharge hyperacidic hot Fe-rich brines, which results in halite deposition when they contact with the atmosphere. As a result, Dallol geothermal area shows extremely high temperature (90-108°C in the springs), pH from -1.7 to 4, and supersaturated salt deposits [1-3].

Still, life finds a way. Despite these extreme features, microorganisms inhabiting Dallol geothermal region, as members of the class Nanohaloarchaea, have been described [3,4]. The analysis of the biodiversity that are surviving and thriving in such polyextreme system, as well as the study of their metabolic potential, could be fundamental to establish the habitability conditions to search for life on other planets.

We applied Shotgun metagenomics and Fluorescence in situ Hybridizations (FISH) methods to analyze the biodiversity and metabolic potential of Dallol geothermal area microbiome.

Our results show the presence of both bacteria and archaea in the Dallol geothermal area, being Bacteria the most abundant domain in this environment. The detected microorganisms are mostly halophiles. However, there is a lower percentage of microorganisms described in extremely hot or acidic environments. FISH experiments corroborated that both bacteria and archaea are alive and active in the system.

Metagenomics analysis shows a predominance of metabolisms based on photosynthesis, heterotrophy and fermentation. In addition, metabolisms that use hydrogen and reduced sulfur compounds as an energy source stand out.

Additionally, genes related to the response to oxidative stress, heat shock, osmotic stress and detoxification have been detected, which could be involved in the adaptation of these microorganisms to the extreme conditions of the Dallol volcano area.