The EnVisS camera for the Comet Interceptor ESA mission

Comet Interceptor is the first Fast mission of the European Space Agency (ESA); it has been selected in June 2019 and is conceived to study a long-period comet, or interstellar object.

The EnVisS (Entire Visible Sky) camera is being designed for mapping and studying the coma of the selected mission target via imaging the whole sky.

Comet Interceptor will fly-by a truly pristine comet, i.e. an object very likely entering the inner Solar System for the first time, or, possibly, an interstellar object originating at another star [1].

The present Comet Interceptor mission configuration comprises a spacecraft and two probes. The spacecraft, called A, will make remote and in-situ observation of the target from afar. The two probes, one provided by the Japan Aerospace Exploration Agency (JAXA), called B1, and the other one provided by ESA, called B2, will venture near to the target.

The EnVisS instrument is foreseen to be mounted on B2. EnVisS is an all-sky camera specifically designed to study the coma of the object over the entire sky.

The B2 probe will be a spinning spacecraft, thus a rotational push-broom or push-frame imaging technique can be adopted for EnVisS to scan and image the whole scene around the spacecraft. Filter strips directly bonded to the detector, or mounted very near to it, can be foreseen for studying the target in different wavelength ranges ([2] [3]) or performing polarimetric imaging. Having no moving parts, this solution allows for a compact, low mass and low complexity camera to be implemented. Moreover, since EnVisS is imaging the whole sky, no specific pointing requirements are to be requested for the fly-by geometry.

The EnVisS instrument features a fish-eye lens [5] coupled to a commercial space-qualified detector from 3D-Plus [4] and ad-hoc power and data handling units and software. A prototype of the EnVisS fish-eye lens optical head will be realized, in the coming months, by Leonardo SpA in Florence (Italy) [6].

EnVisS will feature a push-frame imaging technique, thus acquiring slices of the sky, while the probe rotates (see Figure 1); the slices will be stitched together after acquisition to obtain a full sky image. 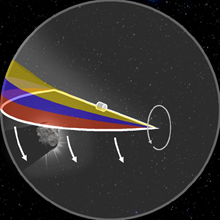 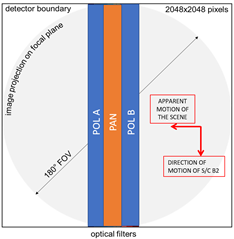 Figure 2: Schematics of the filters strip on the detector.

For EnVisS to study the comet dust and its polarization, three broad-band filters are foreseen at present. They are:

- one broadband filter positioned to be centered on the detector (orange central strip PAN in Figure 2);

Due to scientific requirements and technical instrument constraints, the wavelength range for all the filter strips has been selected to be 550-800 nm.

The probe B2 spin-axis will be pointing to the comet nucleus for most of the time, so that the vertical direction will be sampling different phase angles for the coma, i.e. from 0° to 180°.

For a 4s spinning rate of the B2 spacecraft, in 1 ms the scene is moving by one pixel on the detector. The expected acquired signal for the 1 ms exposure time, taking into account the present estimation of the comet coma radiance, is not sufficient to obtain the desired SNR, i.e. at least 10 for the broad-band filter and 100 for the polarimetric measurements.

A flexible approach has been devised to obtain the required SNR for each type of observation. In the direction of the apparent motion of the scene, the signal from the coma is not expected to change too much and a high spatial resolution is not needed from a scientific point of view. Thus the integration time for each filter strip can be tuned allowing for some smearing in the direction of the rotation of the scene. This approach has the beneficial effect that the spatial resolution is retained in the direction where the signal has its maximum variation and thus assuring a sampling of the comet phase function every 0.1° as required. It also allows for an adjustment of the exposure time if the radiance of the coma is different from expected.

For a very faint target, a further increase of the SNR can be achieved with binning in the rotation axis direction and co-addition of images taken in successive spacecraft rotations.

The Italian and Spanish authors acknowledge financial support respectively from the Italian Space Agency (ASI) through a contract to the Istituto Nazionale di Astrofisica (2020-4-HH.0) and the State Agency for Research of the Spanish MCIU through the ‘Center of Excellence Severo Ochoa” award to the Instituto de Astrofısica de Andalucıa (SEV-2017-0709) and from project PGC2018-099425-B-I00 (MCI/AEI/FEDER, UE).