On February 28, 2020 at 09:30:32 UTC, a daytime superbolide was observed over southeastern Slovenia and neighbouring countries1. In the following days, three meteorite pieces (469, 203, and 48 grams)2 were recovered nearby the Slovenian city of Novo Mesto by local people. The meteorite was classified as an L5 ordinary chondrite, more or less brecciated and shocked.

In this work we reconstruct the trajectory using the available video data which consist of two static security cameras and four dash cameras mounted on cars in motion (Figure 1). We use a new radial distortion method developed by Vida et al. (2021) to accurately model the lens distortion of individual cameras and we determine the position of the vehicles to a precision of several centimetres on every video frame. 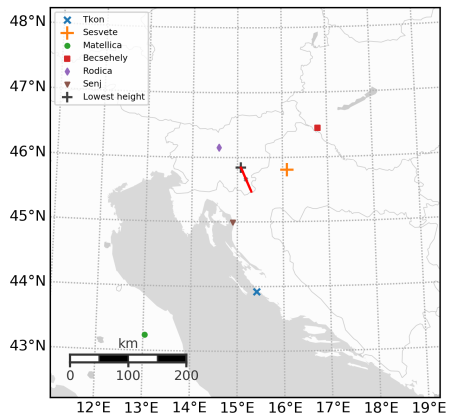 The preliminary trajectory was computed using the lines of sight method and the trajectory uncertainties were computed using the Monte Carlo method (Vida et al., 2020) by adding 3σ noise to the original measurements. The fireball was first observed at a height of 68.7 km and it reached an end height of 17.1 km. The fireball had an entry angle of 47.812° ± 0.096° and an initial velocity of 22.098 ± 0.012 km/s (computed using measurements above 45 km, i.e. before any noticeable deceleration was visible). Figure 2 shows that the average per-station trajectory spatial fit errors were around 100 m (200 m maximum). More observations will be included in a future analysis. 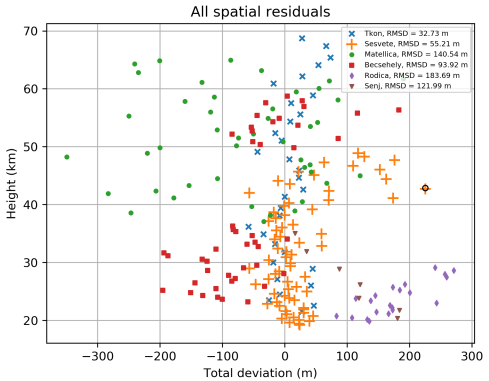 Figure 2. Spatial trajectory fit residuals. The Tkon and Senj stations were fixed security cameras, but only Tkon was calibrated on stars.

The fireball had the following geocentric radiant (J2000):

The computed orbit is:

The fireball was bright enough to be picked up by the US government sensors3 which measured a total radiated energy of 11.5×1010 J. Assuming a typical L chondrite bulk density of 3620 kg/m3, we estimate that the meteoroid had an initial mass of 470 kg, corresponding to a diameter of about 0.63 m. We use the energy estimate to scale the observed light curve using the luminous efficiency of Borovička et al. (2020) – it compares well to an empirically derived light curve using a light source of known magnitude (reflection of the Sun from a chromium sphere at various distances). The fireball had one major fragmentation event at the height of 35 km which was picked up by the seismographs in the vicinity.

A total of 18 fragments were tracked on the videos after the main fragmentation. The dynamic mass analysis shows that the final mass of the largest fragment was on the order of 10 kg. This rather large fragment has not been found yet – it is possibly buried into the soft ground and ploughed over. The fireball experienced fragmentations at dynamic pressures of 2.5, 3.5, and 10 Mpa, as shown in Figure 3. The peak dynamic pressure is the highest ever measured, after the the Benešov fall (Borovička et al., 1998). 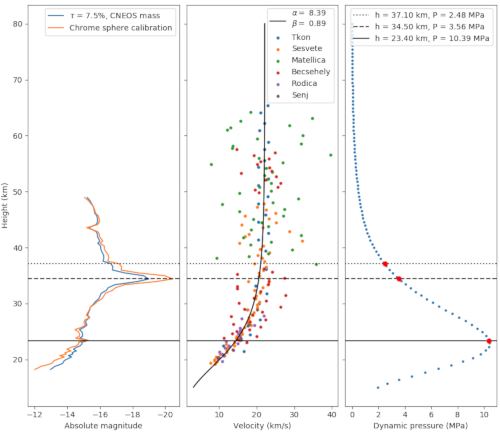 The distribution of finds on the ground indicate that these meteorites were not produced at the end height but that some were ejected at several discrete heights above 20 km.