We quantify the potential of a mid-infrared space-based mission like LIFE (Large Interferometer for Exoplanets) [1, 2] to detect atmospheric signatures of life in the spectrum of a terrestrial planet at various stages of its evolution. We use a Bayesian retrieval framework to simulate observations obtained through LIFE. Using the minimal requirements for the spectral resolution, the signal to noise ratio, and the wavelength range for LIFE, as discussed in Konrad et al. [3] (a contribution to EPSC 2020), we retrieve the atmospheric structure and composition of thermal spectra of the Earth at various epochs [4]: modern day, the Neoproterozoic Oxygenation Event (NOE, 0.8 billion years ago), the Great Oxygenation Event (GOE, 2.0 billion years ago), and a prebiotic Earth (3.9 billion years ago).

These simulations determine in more detail the potential of the LIFE space mission. They also further constrain the technical requirements of the mission, as well as determining the robustness of the analyses routines.

Temperate terrestrial exoplanets are predicted to be very abundant in our galaxy [5]. Such planets are the preferred targets to study when searching for life in the universe.

The only way to characterize a terrestrial exoplanet in the context of its habitability is by studying its atmosphere. Atmospheric spectra are strictly linked to the chemical composition, the temperature structure of the atmosphere, the presence of clouds, the emission and scattering from the surface, as well as many other processes.

With the current instruments, it’s hard to find planets that are similar to the Earth in the habitable zone around their stars. Because of the lack of observational data, we rely on theoretical spectra of terrestrial exoplanets to develop analysis pipelines that could be most effective for the characterisation of such targets. In addition to that, a theoretical approach can be used to determine the technical requirements for future missions, in order to be able to detect the most relevant atmospheric signatures.

Space missions that aim at characterizing terrestrial exoplanets have been proposed, e.g. HabEx [6] and LUVOIR [7] which focus on the reflected (visible and near-infrared) portion of the planetary spectrum, and LIFE [1, 2], the Large Interferometer for Exoplanets, which will characterize terrestrial planets in the thermal (mid-infrared), emitted portion of the planetary spectrum.

Using nulling interferometry, LIFE will allow us to further constrain the bulk parameters and the surface conditions of a few dozens of terrestrial planets, as well as to gather information about their atmospheric structure and composition. The current status of this project, as well as the summary of all the submitted contributions, is discussed in more detail in Angerhausen et al. (2021, this conference).

Bayesian retrieval routines are, so far, the key to a statistically significant analysis of an atmospheric spectrum. These have been successfully used in other astrophysical contexts, as well as similar atmospheric analyses of Jovian exoplanets [see e.g. 8].

The Bayesian retrieval routine that is currently used is composed by two modules:

We validated the routine with an Earth twin orbiting a Sun-like star at 10 pc distance from the observer, as presented in Konrad et al. [3]. In our previous work, we used petitRADTRANS both to produce the input spectrum and as forward model for the Bayesian routine. While still being useful to determine the minimum requirements of the LIFE Mission with respect to resolution, signal to noise ratio and wavelength range, this approach is very simplified and prone to bias.

In this work, to better assess the robustness of the routine with different input spectra, we use instead simulated spectra of the Earth at various stages of its evolution calculated by Rugheimer & Kaltenegger [4]: a prebiotic Earth (at 3.9 billion years ago, or Ga), the Earth during the Great Oxygenation Event at 2.0 Ga and the Neoproterozoic Oxygenation Event at 0.8 Ga, and the modern Earth. We consider both cloudfree and cloudy atmospheres.

We consider a spectral resolution of 50, a signal to noise ratio of 10, and a wavelength range of 4-18.5 micron, which are the minimum requirements for LIFE as discussed in Konrad et al. [3].

As shown in Figures from 1 to 4, the simulated spectra of the Earth [3] in the various epochs appear very different. The presence of a 60% global cloud cover also has an impact on the shape of the spectrum.

Branching out from the modern Earth-twin scenario is therefore essential to understand to what extent LIFE would be able to differentiate between the various evolutionary stages of a terrestrial planet, both before and after the appearance of life on the surface.

Retrieval runs are currently ongoing. Some preliminary results can be seen in Figure 5, which shows the retrieved spectra of a cloudfree prebiotic Earth planet and of a cloudfree modern Earth, compared to the input spectra (from [3]). The retrieval suite appears able to reproduce the main features of the spectrum, with subsequent insight on the atmospheric compositions and structures.

A thorough analysis of these retrievals will be discussed in more detail and presented in this conference. 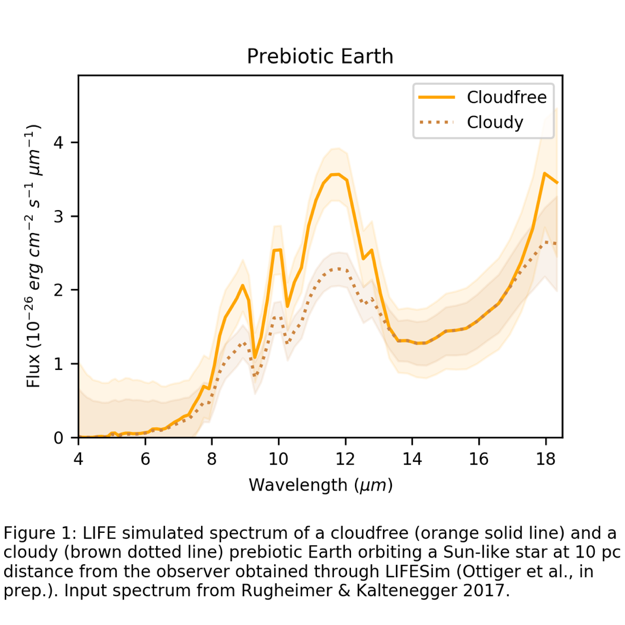 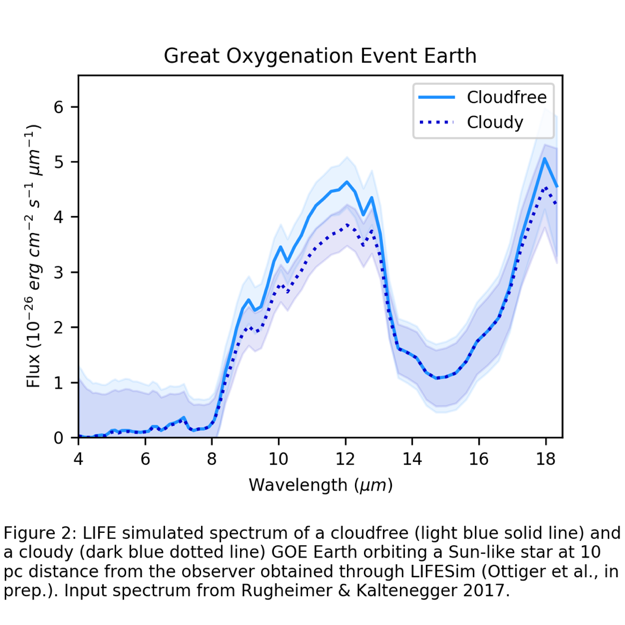 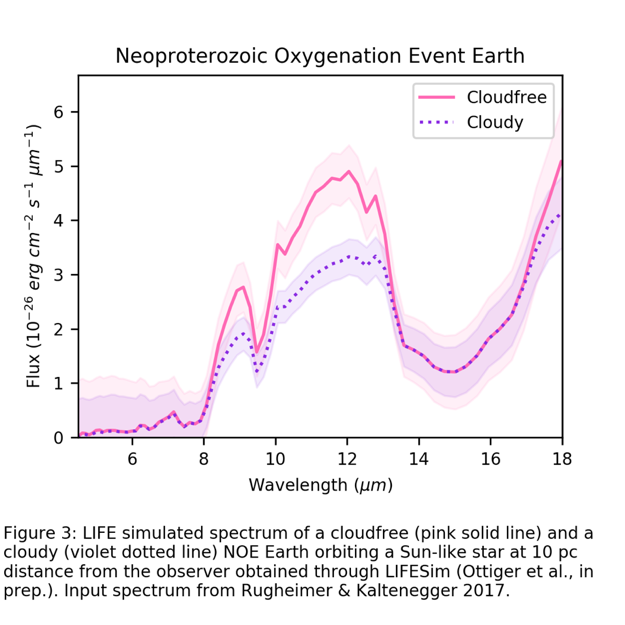 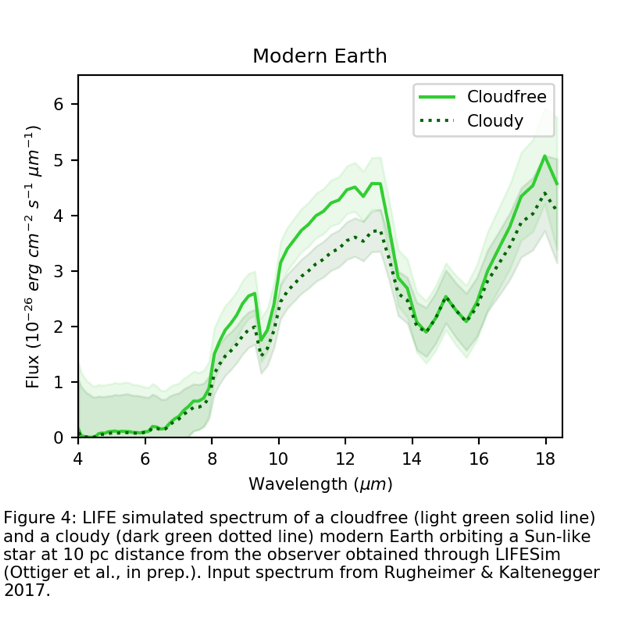 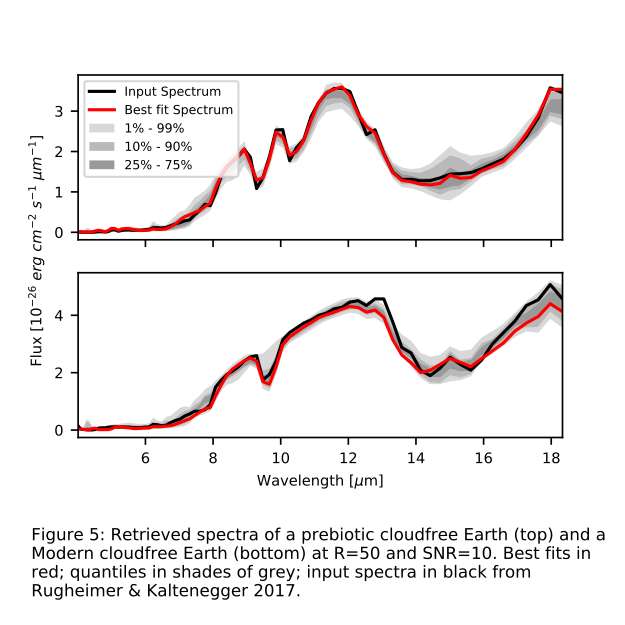