In the perspective of detecting and characterizing more and more close-in-orbit hot terrestrial exoplanets transiting nearby M-dwarf stars (e.g., best Earth-size targets for observational studies), the atmosphere of our "sister" planet Venus is one of the most relevant cases to address observational prospects. The detection of Venus-like atmospheres at various orbital periods and planetary masses will create a picture of where the divergence between Earth and Venus originates [1].

In this work, we propose to use a 3D Global Climate Model (GCM) developed explicitly for exoplanets and paleoclimate studies [2] to simulate the atmospheres of a possible class of Venus-like exoplanets i.e., rocky, highly irradiated exoplanets orbiting M-dwarf stars. The objectives are twofold: 1) to study the impact of changing specific planetary parameters, e.g., planetary radius and gravity, in the large-scale atmospheric circulation; and 2) to reproduce synthetic emission and reflected phase curves capable of addressing observational prospects.

In the Solar System, Venus and the Earth are examples of two rocky planets with similar radii and mass values and possibly a similar bulk composition [3]. Nonetheless, the two planets also represent a scenario of divergent climate evolution. Thus, in terms of mass and radius parameters, Venus and Earth would be astrophysically indistinguishable in the event we would be observing them as exoplanets.

Several modelling studies [4] established possible limits for both the habitable zone and the “Venus Zone” [1]. These 1D modelling studies offered a first approximation for the future differentiation between Earth-like and Venus-like exoplanet populations. Nonetheless, the complete characterisation and differentiation between these two populations can only be currently accomplished with dedicated 3D GCMs, which can reproduce the sort of climate feedbacks that ultimately constraint surface habitability conditions [5]. The diversity of planetary climates is expected to be significant given 1) the variety of planetary atmospheres on the rocky worlds of our Solar System 2) the diversity of the planetary parameters for the exoplanets observed so far. Thus, predicting the actual climate for a specific planet represents a challenging task [6].

A new Era for characterising rocky exoplanet atmosphere will be opened by the James Webb Space Telescope (JWST), foreseen to be launched in 2021 and continued by the ESA mission ARIEL scheduled for launch in 2029. In addition, a new generation of instruments is being developed, including a whole set of new high-resolution spectrographs for the Very Large Telescopes (VLT) and Extremely Large Telescopes (ELT).

We propose using the Generic GCM firstly developed at the Laboratoire de Meteorologie Dynamique (hereinafter LMD G-GCM) to simulate Venus-like exoplanetary atmospheres and climate response to a realistic set of planetary parameters. We will also provide synthetic observables, reflected and emission phase curves, which are inherently 3D, to support the characterisation of the population of Venus-like exoplanets in the future.

The LMD G-GCM uses a 3D dynamical core, common to all terrestrial planets, and a planet-specific physical core. It includes an up-to-date generalised radiative transfer for variable gaseous atmospheric compositions made of various cocktails of CO2, N2, and H2O, O2, CO, using the correlated-k method. Processes such as the radiative effect of clouds or Rayleigh scattering are considered.  For instance, it has successfully been used to simulate the climate of other exoplanets like the cold super-earth Gliese 581d, a tidally-locked exoplanet like Gliese 581c/HD85512b [2], or Proxima b [5].

In this work, the LMD G-GCM is adapted to study close-in Venus-like exoplanets orbiting M-dwarf stars. The work is focused on the response of large-scale atmospheric circulation to critical parameters: radius, gravity, surface atmospheric pressure, solid-body rotation rate. For the latter, we will be selecting two likely modes, 1:1 and 3:2 spin-orbit resonances. Each parameter will be changed while keeping the others fixed. Combinations of realistic parameter variations will be selected according to specific mass-radius relationships [7]. This will allow for the characterisation of temperature and wind fields at different pressure levels, particularly at and above the classical Venus top cloud layer.

To address the impact from simulating hot, dense atmospheres typical for Venus-like exoplanets, we run the LMD G-GCM using the planetary parameters of exoplanet TRAPPIST-1c as a framework for a possible Venus-like exoplanet.  Synchronous rotation, with no obliquity and eccentricity, were assumed, together with a Venus-like atmosphere, with 92-bar surface pressure, and similar chemical composition with radiatively active Venus-type clouds, UV absorbers, and meridional variation of the cloud structure [8]. Quasi-convergence of temperature is achieved for the whole atmosphere after 15000 orbits (See Fig.1).

Using the last orbit, the quasi-steady state obtained will be taken as the initial state to run simulations varying the parameters space, allowing the study of atmospheric variables (See Fig.2). In addition, top-of-the-atmosphere longitude-latitude maps of outgoing fluxes computed by the LMD G-GCM will be used to produce phase curves and interpret possible variations due to atmospheric dynamics (e.g., superrotation, jets, waves). 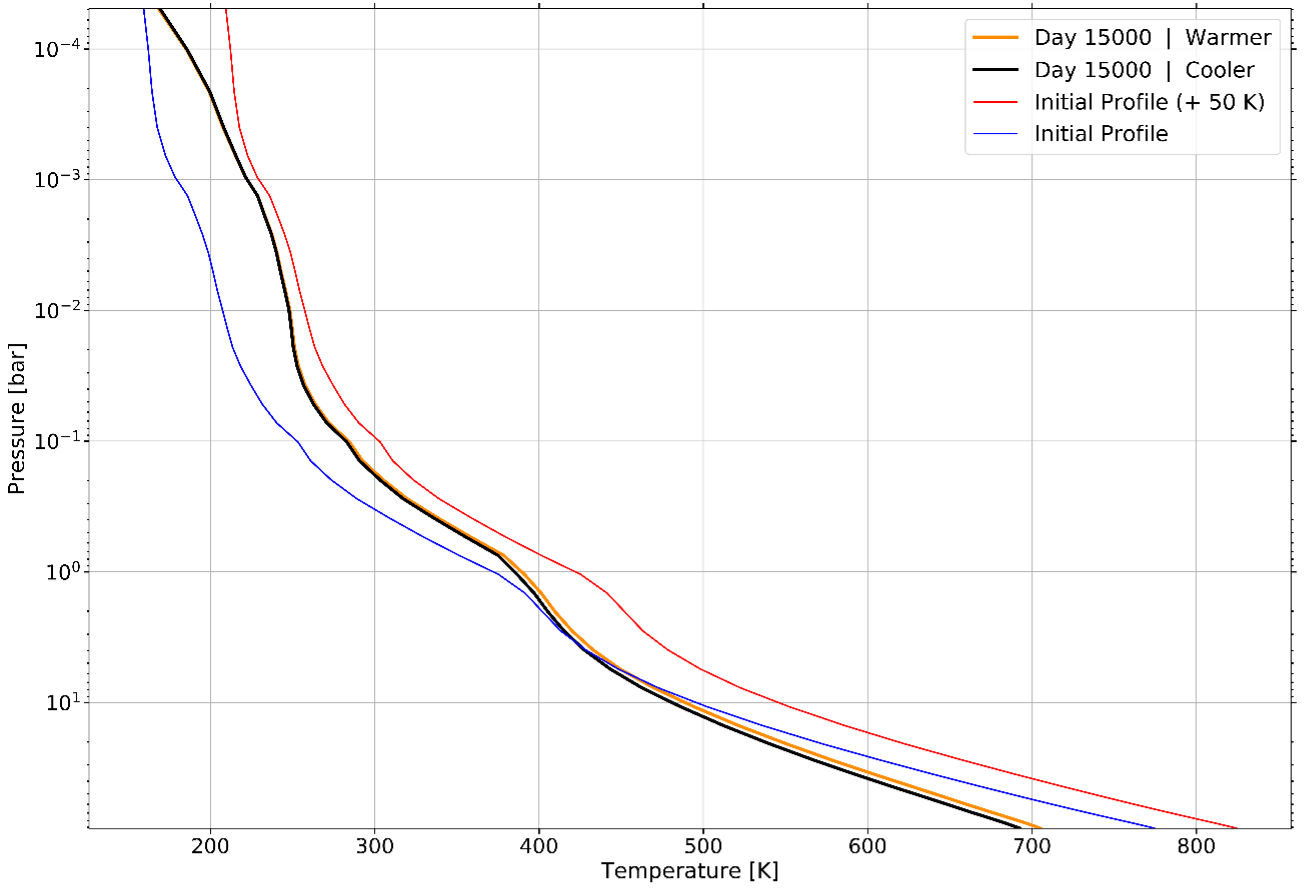 Figure 1.  Temperature profile (solid black line) for the quasi-steady state, used as a reference input for future simulations. The initial profile (thin blue line) is obtained after running the model for 300 days for a Venus-like planet orbiting a Sun-like star.

Figure 2. Instantaneous temperature field for the cloud-top pressure level (p~0.02-bar) for TRAPPIST-1c, 300 orbits after the quasi-steady state was obtained. The sub-stellar point is represented by the white star.