Roughly 50 % of solar-like stars are part of binary star systems. Yet, only about 1801 of the nearly 4700 exoplanet candidates are part of a binary or multiple star system.
Yet, not all of the known planets in binary systems are in coplanar orbits. Some are misaligned with respect to the binary star orbital plane up to 90◦ (see catalogue1).
We want to investigate the late stages of terrestrial planet formation in binary star systems, with special emphasis on the dynamical evolution of the embryo planetesimal disks. We restrict ourselves to S-type motion, meaning the disk objects orbit only the primary star. To take the effects of gravitational interactions among disk objects into account a massive parallelized force calculation is applied, which has been recently developed by one of the authors [4]. The planar binary-star-disk configuration defines our reference plane. For simplicity the binary stars are inclined instead of aligning the disk objects on various inclinations.

For solving the equation of motions the Bulirsch-Stoer (BS) method is applied. It is an extrapolation method which takes different results for a timestep τ for the extrapolation of a result for “infinity“ substeps. Furthermore, the method is massively parallelized on graphical processing units (GPU).
The collisions among disk objects are handled so-far with the so-called “perfect merging“. This setup allows simulations up to 10000 gravitational interacting disk objects for about 1 Myr in a reasonable computation time.
The intial setups for the equal mass binary star systems are shown in table 1.

The circumprimary planetesimal disk extends between 1 and 4 au and is initially dynamically cold. For the given binary star systems the disk lies within the area of stable motion [2]. In this study the simulations have been performed using 2000 planetesimals and 25 planetary embryos for a time of 1 Myr for each binary stars listed in table 1.

The simulations of inclined tight binary stars (ab = 30 au) show an oscillation of the planetesimals’ and embryos’ inclination about binary stars inclination between imin = 0° to imax = 2 · ib although the disk was dynamically cold at the beginning of the simulation. Figure 1 shows the case for ib = 20°. 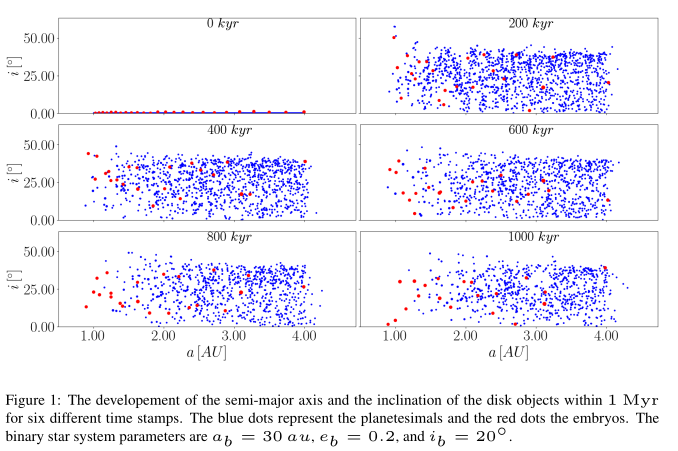 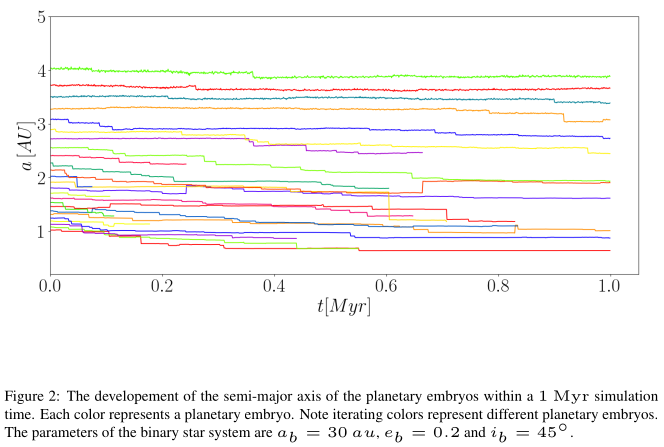 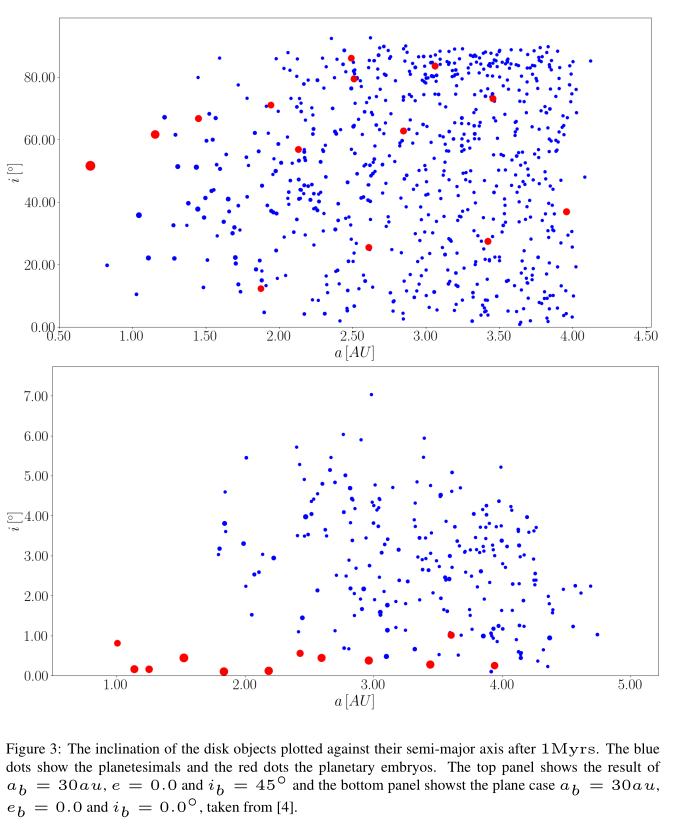 We investigated the dynamical evolution of misaligned (=ˆ variation in the inclination of the binary stars) protoplanetary disks for various binary star configurations with planetesimal disks containing about 2025 mutual gravitational interacting objects.
This study showed that in the case of inclined tight binary stars case the rapid increase in the inclination of the disk objects slows down the planetary embryos growth compared to the coplanar case [4]. Additionally, the planar case shows an outward migration of the outer planetasimals, while the inclined systems indicate an inward migration of planetary embryos (see figure 3), which is possibly caused by Kozai migration [3].