Romain Allart and the The ESPRESSO consortium
Hide

During the past few years, exoplanet atmospheric studies have grown tremendously. Detections of atomic and molecular species are reported from the ultraviolet to the infrared at low- and high-resolution for Earth-mass to Jupiter-mass planets and from temperate to ultra-hot worlds. Nowadays, ground-based high-resolution spectrographs are starting to produce groundbreaking results that inform us of the temperature structure and dynamics of exoplanet atmospheres.

WASP-127b (Lam et al. 2017) orbits a bright (V = 10.17) G5-type star with a period of 4.18 days. The host star is at the end of its main sequence phase with an age of ~10Gyr and radius of 1.30RS and has entered the sub-giant phase. Therefore, the planet might be going through an inflation process for the second time (Lopez & Fortney 2016), leading to its large radius (~1.31RJ). WASP-127b is a lukewarm (~600 times Earth irradiation) Saturn at the right mass border of the evaporation desert. Assuming a hydrogen-helium composition, its atmospheric scale height is about 2100 km. In this case, the signal in transmission for one scale height is around 420 ppm, potentially making this planet one of the best among those of its class to study exo-atmospheres through transmission spectroscopy.

Near-infrared low-resolution data obtained with the Hubble Space Telescope (Spake et al. 2020) have revealed the strongest water band amplitude in an exoplanet with a mean amplitude of about 800ppm. Moreover, the presence of clouds and hazes is necessary to explain the complete spectrum. Such planets with a high-amplitude water signature in the J-band are well placed to be studied from the ground with visible and NIR spectrographs, allowing the impact of hazes and clouds to be analyzed by measuring the water content at different wavelengths.

Observations of WASP-127b with ESPRESSO

ESPRESSO is a fiber-fed, ultra-stabilized high-resolution echelle spectrograph installed at Paranal. It can collect the light from each 8m Unit Telescope (UT) individually or the 4UTs simultaneously of the Very Large Telescope (VLT). Two transits of WASP-127b were obtained within the framework of the GTO consortium. We published our results in Allart et al. 2020, which includes the first measurement of spin-orbit alignment of this system revealing the peculiar orbital architecture of the system. The old star WASP-127 is a slow rotator while its planet has a misaligned retrograde orbit (Fig. 2). This is surprising as stars with Teff below 6250K are supposed to have aligned systems. An explanation could be that WASP-127b remained trapped in a Kozai resonance with an outer companion and only recently migrated close to its star. 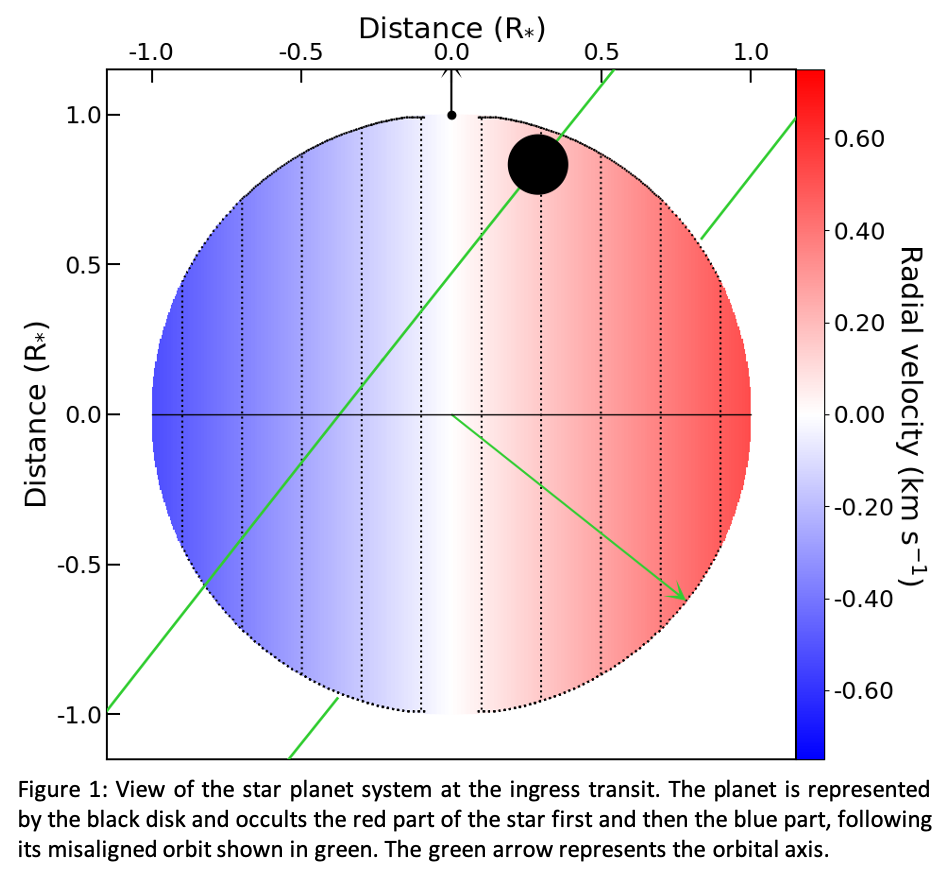 A view on the atmosphere of WASP-127b

We used the ESPRESSO data to analyze the transmission spectrum of the exoplanet. Visible high-resolution datasets are known to reveal the exoplanet thermosphere through atomic species as the well-known sodium doublet. The WASP-127b transit datasets have revealed an excess of absorption of 0.34 +/- 0.04% at the expected position of the sodium doublet corresponding to a small extension over 7 scale heights. However, we do not detect the presence of other atomic species but we were able to set upper limits of only a few scale heights. 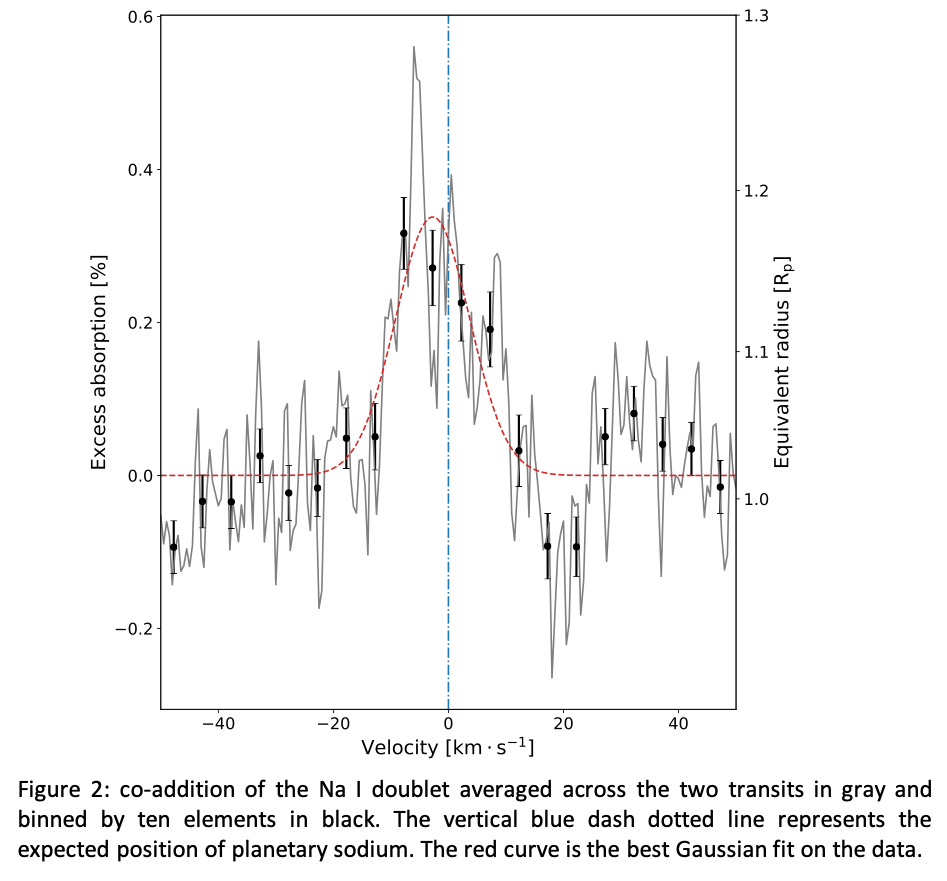 We also undertake a thorough search for water vapor at visible wavelengths. To do so, we used the well-known cross-correlation function technique to average thousands of water lines in velocity space. To be as model-independent as possible, we applied binary masks containing the position of water lines at different temperatures and with an increasing number of lines. We showcased that such a technique is sensitive enough to retrieve planetary signals by doing an injection recovery test. Once applied to the transit datasets of WASP-127b, we were able to put a 3-sigma upper limit on the presence of water vapor at visible wavelengths of only 38ppm on the average depth of the 1600 strongest water lines at the equilibrium temperature. This upper limit corresponds to an atmospheric extension of only 0.08 scale height.

Based on this unique precision obtained with ESPRESSO, we explored the compatibility between ground-based high-resolution spectroscopy and space-based low-resolution spectroscopy. We computed a grid of models with different grey cloud-deck pressure based on the results of Spake et al. 2020 and using the pi-eta line-by-line radiative transfer code (Pino et al 2018). On one hand, models with grey cloud deck pressure ranging from 0.3 to 1 mbar are compatible with the HST datasets, while in another hand only models with pressure below 0.5 mbar are compatible with the ESPRESSO datasets. Therefore, by combining the low- and high-resolution datasets of WASP-127b, we can constrain the grey cloud pressure between 0.3 and 0.5 mbar. 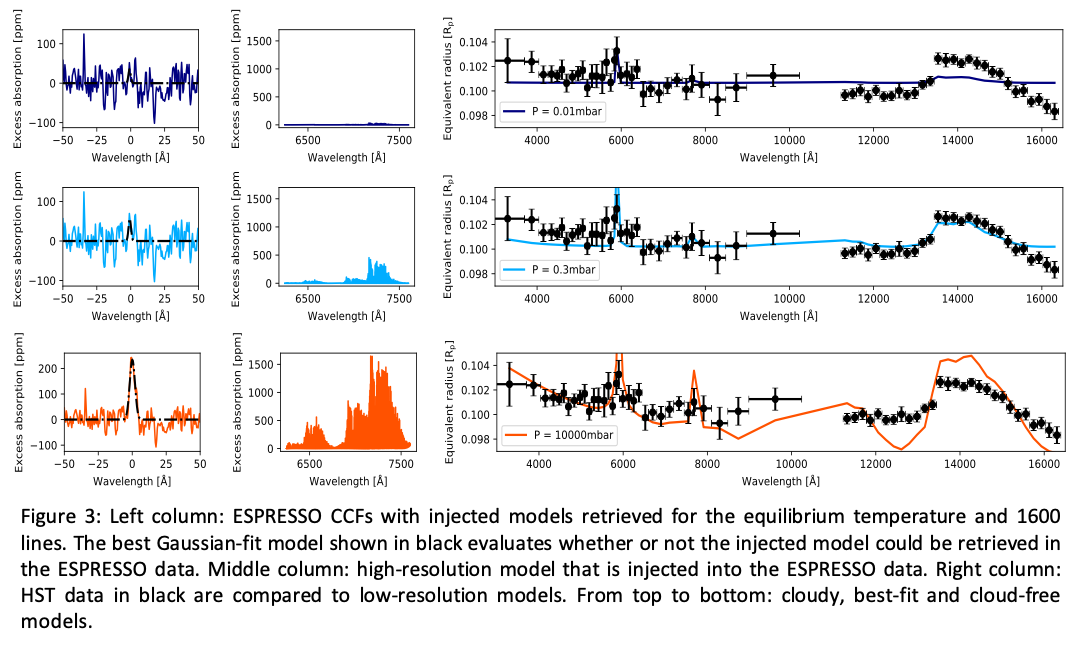 We used two transits of WASP-127b obtained with ESPRESSO to acquire a thorough understanding of the orbital architecture of the system and the exoplanet atmosphere.

We propose a new framework to search for water vapor and other molecular species at high resolution. Despite the good data quality, we did not detect water vapor. However, we combined this result with a low-resolution detection of water at 1.3 microns to constrain the presence of clouds in the atmosphere of WASP-127b.

To conclude, we report for the first time that high-resolution visible data can be used to differentiate between cloudy and cloud-free exoplanets by measuring the water content and can also provide essential information on the cloud-deck pressure. The framework developed here to measure this water content will be applied to other exoplanets in the ESPRESSO GTO atmospheric survey and other surveys such as the NIRPS GTO atmospheric survey.