Could we observe exomoons around β Pictoris b?

The discovery of the first extrasolar planets demonstrated that planets can form around other stars and be detected with current instrumentation. Since more than 200 moons exist in the Solar System, it is expected that they orbit exoplanets as well. Detecting an exomoon could set the next milestone in observations of exoplanetary systems.

Tidal interactions between planets and their satellites can heat a satellite’s interior. The most evident example is Io, which is the most tidally active body in the Solar System. Since tidal dissipation depends on the orbital and physical properties of the system, if tidal heating is vigorous enough in exoplanetary systems, there is a chance that Tidally Heated Exomoons (THEMs; Peters and Turner 2015) are detectable with current instrumentation and/or the JWST in infrared (IR) wavelengths. As a direct result of tidal heating, spectral signatures of volcanic activity could also be a method of detecting THEMs (Oza et al. 2019).

Two of the gas giant planet moon systems are in long-lived mean motion resonances (MMR) and it is expected that the latter would prevail in extrasolar systems as well. Taking the Jovian satellites as an archetype for an exomoon system around β Pictoris b, this would mean that an MMR between two or more exomoons would make them detectable for larger timescales, maintaining tidal activity over the lifetime of the system.

β Pictoris is a 23 Myr old star with a distance of 19.44 pc. A ≃10 Mj directly imaged planet is orbiting the star at 9.8 AU (Lagrange et al. 2020). The system is almost edge-on to our line of sight, making β Pictoris b a plausible candidate for the search of THEMs in the IR, through photocenter astrometry of the combined planet and moon (Agol 2015) or by looking for primary and secondary transits of the exomoon.

We scale up a Galilean satellite system around β Pictoris b in order to investigate which properties make a putative exomoon detectable. We use orbital-thermal coupled models that assume a layered, radially symmetric moon, consisting of a silicate mantle and a liquid core. We assume that heat is transferred via melt advection (Moore 2003) and mantle convection from the interior to the surface and we obtain equilibrium temperatures. We explore the parameter space of orbital and physical properties of an exomoon around β Pictoris b by using different rheological models (Maxwell, Andrade).

Given a semi-major axis and eccentricity for an 8MIo mass exomoon, we obtain the corresponding interior structure and heat flow through the moon, resulting in a calculated effective temperature at the surface. We present our results for our Andrade rheology model and heat transfer mechanisms (Figure 1) and place constraints on the feasible interior models and orbital parameters for a putative surface heat flux of an exomoon around β Pictoris b. At Io’s orbital eccentricity a 2RIo exomoon would need to be close to the Roche radius of β Pictoris b to reach 600 K and be observed with the JWST (Figure 2), however this limit relaxes for higher eccentricities and bigger moons. We find that the Andrade rheology results in higher surface temperatures when compared to the basic Maxwell viscoelastic model. 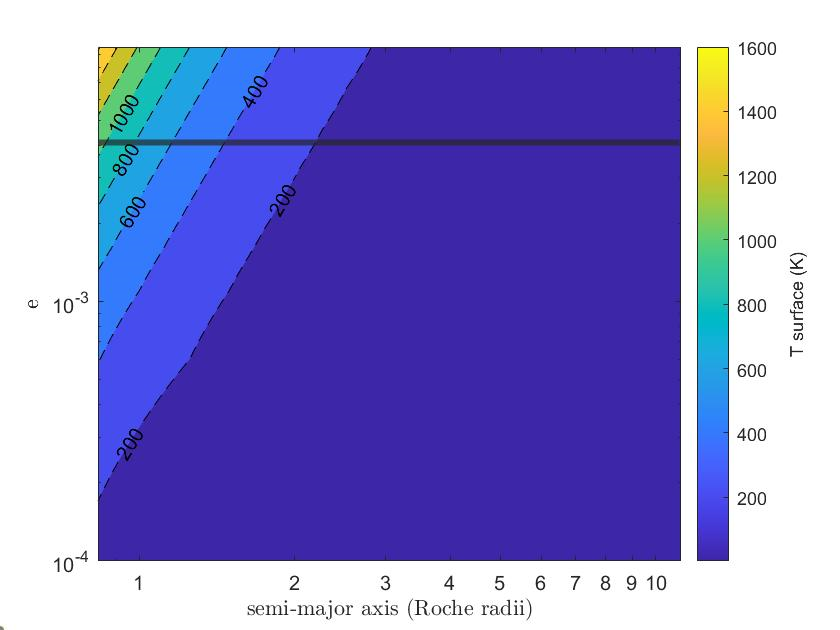 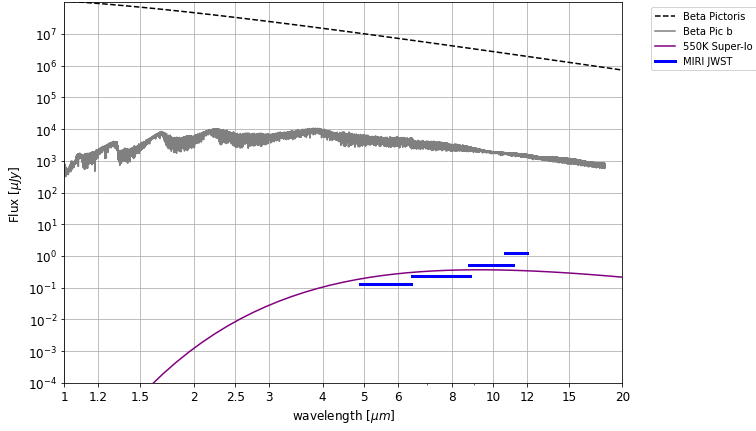 Figure 2: Fluxes at the β Pictoris system. The grey continuous line shows the modeled spectrum of a planet with similar parameters as β Pictoris b (Morley et al. 2015), the dashed black line the blackbody curve of the star and the purple line the one of a Super-Io (2RIo). The horizontal lines are the 5σ and 10,000s integration time detection limits of MIRI/JWST for various bands (Glasse 2010)).