Astrobiology is the study of whether present or past life exists elsewhere in the universe. To understand how life can begin in space, it is essential to know what organic compounds were likely available, and how they interacted with the planetary environment. This session seeks papers that offer existing/novel theoretical models or computational works that address the chemical and environmental conditions relevant to astrobiology on terrestrial planets/moons or ocean worlds, along with other theoretical, experimental, and observational works related to the emergence and development of Life in the Universe. This includes work related to prebiotic chemistry, the chemistry of early life, the biogeochemistry of life’s interaction with its environment, chemistry associated with biosignatures and their false positives, and chemistry pertinent to conditions that could possibly harbor life (e.g. Titan, Enceladus, Europa, TRAPPIST-1, habitable exoplanets, etc.). Understanding how the planetary environment has influenced the evolution of life and how biological processes have changed the environment is an essential part of any study of the origin and search for signs of life. Earth analogues experiments/instruments test and/or simulation campaigns and limits of life studies are included as well as one of the main topics of this session. Major Space Agencies identified planetary habitability and the search for evidence of life as a key component of their scientific missions in the next two decades. The development of instrumentation and technology to support the search for complex organic molecules/sings of life/biosignatures and the endurance of life in space environments is critical to define unambiguous approaches to life detection over a broad range of planetary environments. 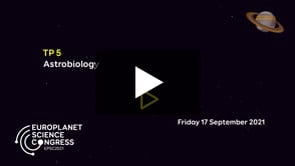 Hypervelocity impact phenomena are ubiquitous throughout our Solar System and, as a result of their highly energetic nature, have been responsible for a variety of both constructive and destructive events. Through the study of hypervelocity impacts we have gained unique insight into the on-going processes experienced by bodies in space, along with the effects these processes have on different materials [1]. With the number of space missions prioritizing the detection and collection of organic signatures ever-increasing, it has become necessary to consider whether collection methods can affect the composition and integrity of organic compounds [2-5]. Here, pyrene, a polycyclic aromatic hydrocarbon, was fired onto an aluminium (Al-1100) foil using a two-stage light gas gun (LGG) at 6.39 kms-1. Raman analyses of the foils suggest that the energy experienced on impact was sufficient to modify the pyrene into graphite. This demonstrates that sampling protocols need to be carefully considered as materials may, inadvertently, get corrupted in the collection process.

The University of Kent’s two-stage LGG [6] was used to horizontally accelerate pyrene prior to impacting an aluminium foil at 6.39 kms-1. The foils were then examined using a Hitachi S-4700 cold field emission Scanning Electron Microscope (FEG-SEM), followed by Raman analyses using a Horiba LabRam HR-800 spectrometer with a 633 nm laser.

The results from this experiment indicate that around the rim of the crater the pyrene has been modified into graphite (Figure 1).

Figure 1: An example crater formed as a result of pyrene hitting the aluminium foil. Top: a FEG-SEM image of the crater at 3500× magnification, 5 kV. Middle: A map showing the graphite detected around the rim of the crater (red) using Raman spectroscopy. Bottom: Example Raman spectrum of one of the red dots in the maps, showing the characteristic graphite peak at 2650 cm-1.

Additionally, the Raman data suggests that there is a different population of residues in the base of the crater that corresponds to neither pyrene nor graphite (Figure 2).

The results from this experiment show that, at 6.39 kms-1, the energy experienced during impact is sufficient to modify pyrene into graphite, presumably by breaking the bonds between the aromatic rings. Moreover, a different population of residues is observed on the crater floor with characteristic peaks between 600-700 cm-1. Although these residues are difficult to characterize, several hypotheses are posed. Firstly, it is suggested that the residues at the base of the crater could be disorganized pyrene resulting from the high pressures and temperatures experienced by the projectile on impact. Other possibilities include that a metal complex formed as a result of the reaction between the pyrene and aluminium foil, or perhaps the aluminium catalysed a reaction encouraging the (possibly partial) formation of benzene rings. This is due to the 680 cm-1 line, which also closely corresponds to one of the only strong benzene peaks. Nevertheless, the results from these experiments clearly demonstrate that organic, polycyclic aromatic hydrocarbon compounds, such as pyrene, can be inadvertently modified on collection due to impact. Therefore, it is important to constrain sampling parameters, particularly velocity and collection substrate, to ensure that precious material collected in space is done so in the least compromising way. Only that way will we be able to make accurate identifications and classifications of materials which may, one day, help us uncover the secrets of our Solar System.

The authors would like to thank the UK Sciences and Technology Facilities Council (STFC) for funding and M. C. Price for all his help and advice.

Impacts are prevalent in the solar system and have played a profound role in the evolution of the solar system bodies. The delivery of prebiotic compounds through impact events is thought to be a crucial step in developing habitable conditions on a planetary surface. Impact events are, therefore, significant in our understanding of the origins of life on Earth or elsewhere. Previous studies have reported the role of the impact process in the abiotic synthesis of building blocks of life, such as amino acids [1-3] and peptides [4, 5]. Here, we report the results of an experimental investigation simulating hypervelocity impacts in the laboratory on an icy mixture of amino acids. Various batches of amino acid mixtures within water ice targets, mimicking the icy bodies (140 K), were prepared and a spherical bullet of size 1 mm was fired at a speed of approximately 5 km s-1 using the light gas gun facility at the University of Kent [6]. Extremely high pressure of 10’s of gigapascals is achieved within a very short time scale as might be expected to be achieved under impact-induced shock conditions. After the impact, the ejected material from the target was collected and analyzed. When these ejecta was subjected to a Scanning Electron Microscope (SEM) analysis, it revealed ordered structures with interesting morphological features. A SEM micrograph of amino acid glutamine ejecta consisting of dendritic patterns is shown in Figure 1. LCMS analysis of ejecta residue shows that long polypeptide is synthesized as a result of impact.