Research into the orbital and physical properties near-Earth asteroids (NEAs) is important as these objects can reveal information about the origin and history of our planetary system.
Here we present our findings regarding the physical characteristics of the near Earth asteroids (NEAs) 2005 UD and 2001 SG286. The 2005 UD is currently a possible target for the DESTINY+ space mission, along with (3200) Phaeton which seems to share similar dynamic and physical characteristics. However, compared to Phaethon, there is still limited data available regarding 2005 UD. On the other hand, 2001 SG286 is another very interesting object, feasible as target for a sample-return mission which required additional observations to firmly establish its nature and composition.
In order to obtain the light-curves of these objects, we used the 2.5m Issac Newton Telescope (INT) equipped with Wide Field Camera CCD4 and the Sloan photometric filters. The visible spectrum of 2005 UD was captured using the INT with the Intermediate Dispersion Spectrograph (IDS) instrument. Furthermore, we used the 3.58m Telescopio Nazionale Galileo (TNG) equipped with the NICS instrument and the AMICI prism disperser to capture its infrared spectrum. The spectrum of 2001 SG286 was acquired using the 10.4m Gran Telescopio Canarias equipped with Optical System for Imaging and low Resolution Integrated Spectroscopy (OSIRIS) instrument. The observations of both objects were made during their recent favorable approaches (October 2018 for 2005 UD and October 2020 for 2001 SG 286).
For photometric data reduction we used the PHOTOMETRY PIPELINE by Michael Mommert and the MPO CANOPUS software with the reference stars from the GAIA and APASS catalogues, respectively. The nightly zero points were found to be consistent up to 0.1 magnitudes. MPO Canopus was finally used for the rotation period analysis, using the FALC (Fourier Analysis of Light Curves) algorithm. The light-curve plots are shown below. The “Reduced Magnitude” on the Y axis represents the Sloan filter magnitude values that have been corrected from sky magnitudes to unity distance by applying –5 * log(rR) to the initial measurements, where r is the Earth-asteroid distance and R is the Sun-asteroid distance. The X axis represents the rotational phase.
For 2005 UD, we found that a trimodal solution with a period of 7.85 hours is the best fit with polynomial orders ranging from 3 to 8, taking into account the INT data. This solution was previously suggested by Moskovitz in his presentation at PERC Int'l Symposium on Dust & Parent Bodies 2019 (IDP 2019) as a valid possibility, besides the predominant value of 5.23 hours currently found in the literature [1]. 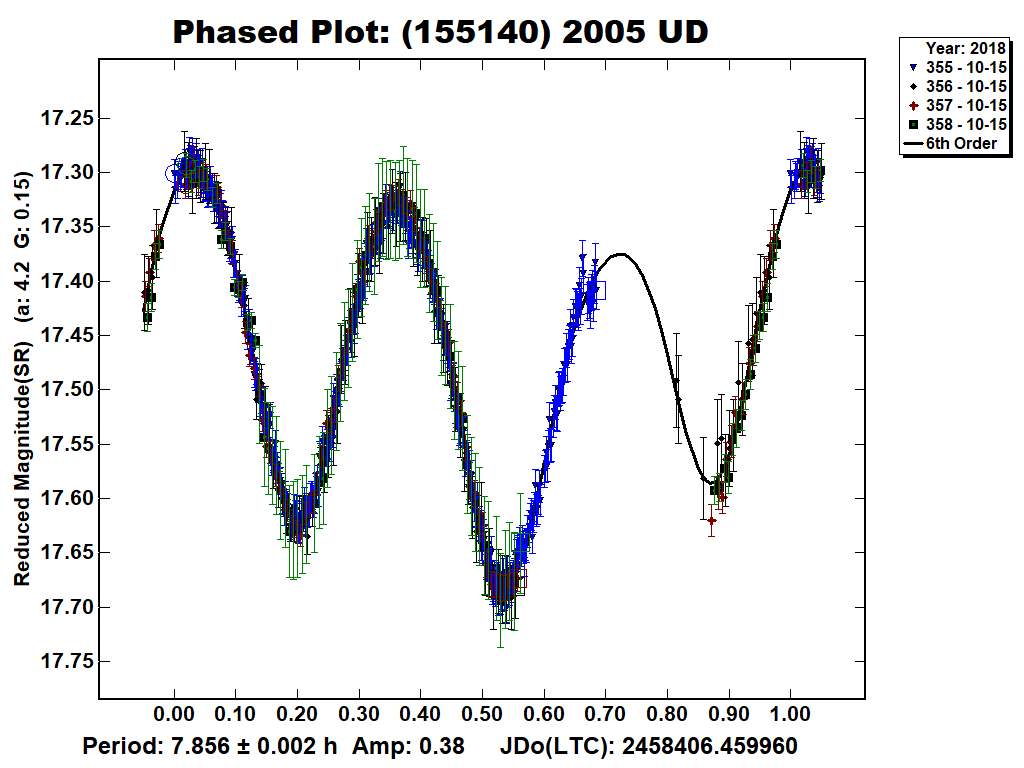 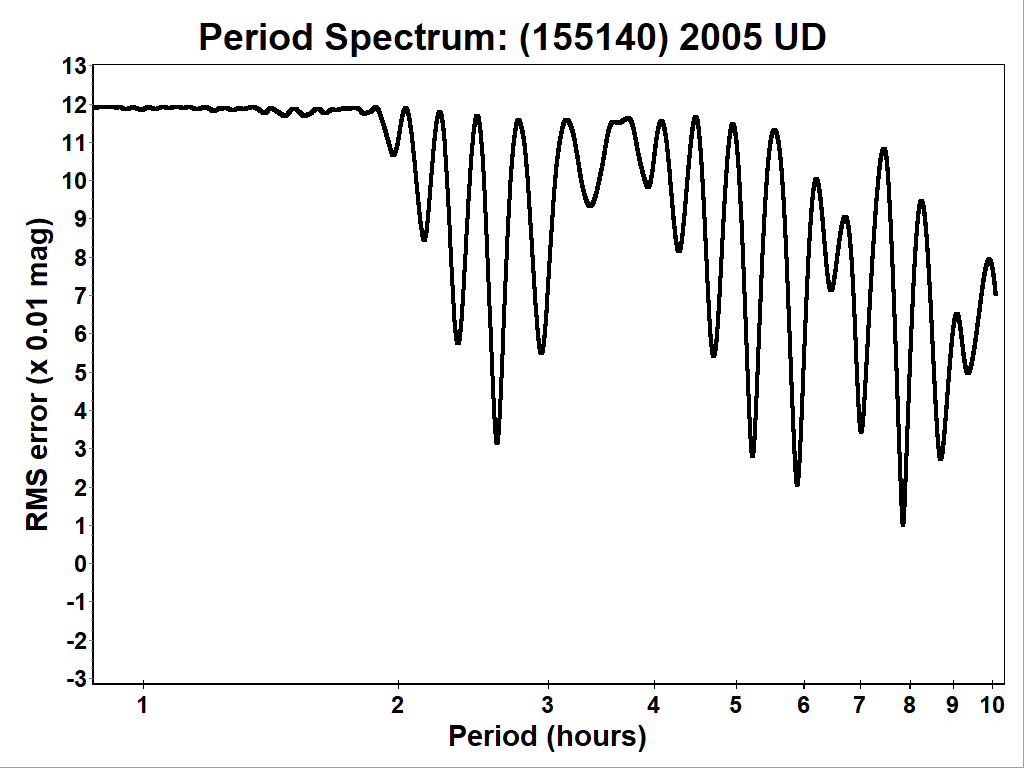 As for 2001 SG286, our analysis indicates that it is a non-principal axis slow rotator (tumbler), with overlapped rotational periods of 12.3 and 18.45 hours. Although we searched for a binary solution, we could not get a compelling result. Moreover, probabilistically there is a low chance of finding a companion given that the majority of binary asteroids are fast rotators. 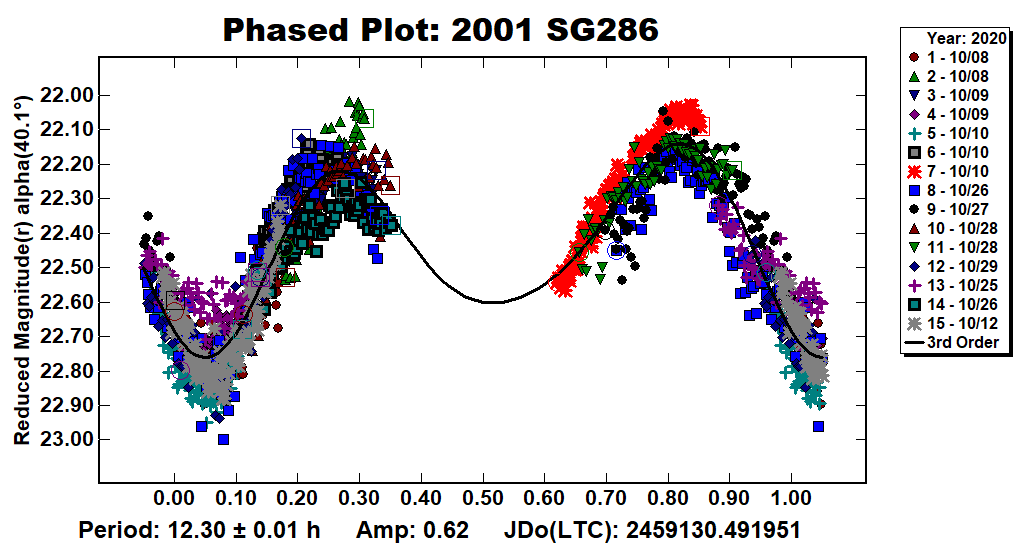 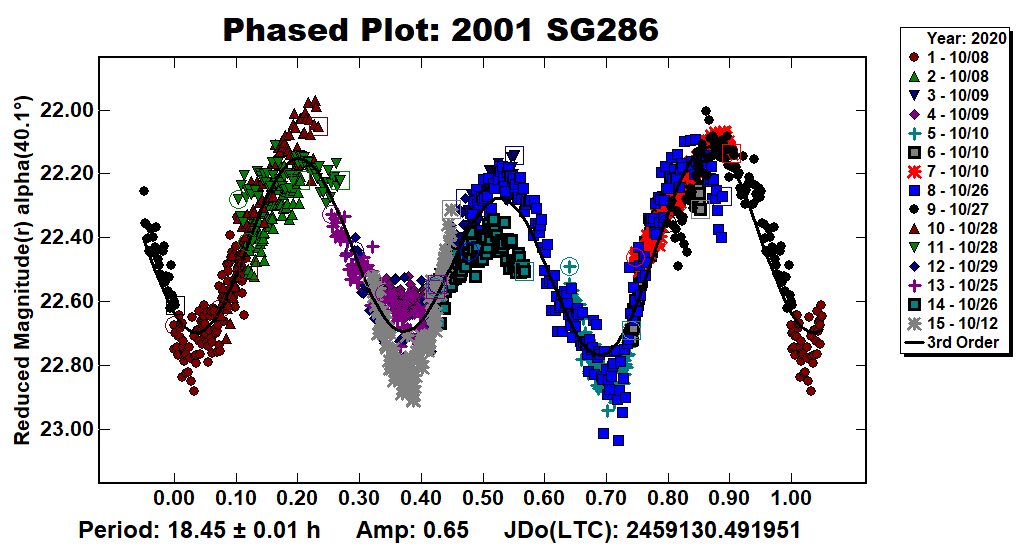 2005 UD presents a C-type spectrum according to Bus-DeMeo classification.
In this case, we used the infrared data to calculate the thermal excess according to the thermal model described by Rivkin et al [2]. By further applying the aforementioned model and taking into account the heliocentric distance of the object at the time of the observation, we determined the geometrical albedo of 2005 UD to be pV = 0.06, which is in agreement to the latest estimate of Masiero et al [3].

On the other hand, the high quality spectral data obtained with GTC allowed us to firmly determine that 2001 SG286 is an S-type asteroid according to Bus-DeMeo classification, a result which is not in agreement with previous studies[4][5]. 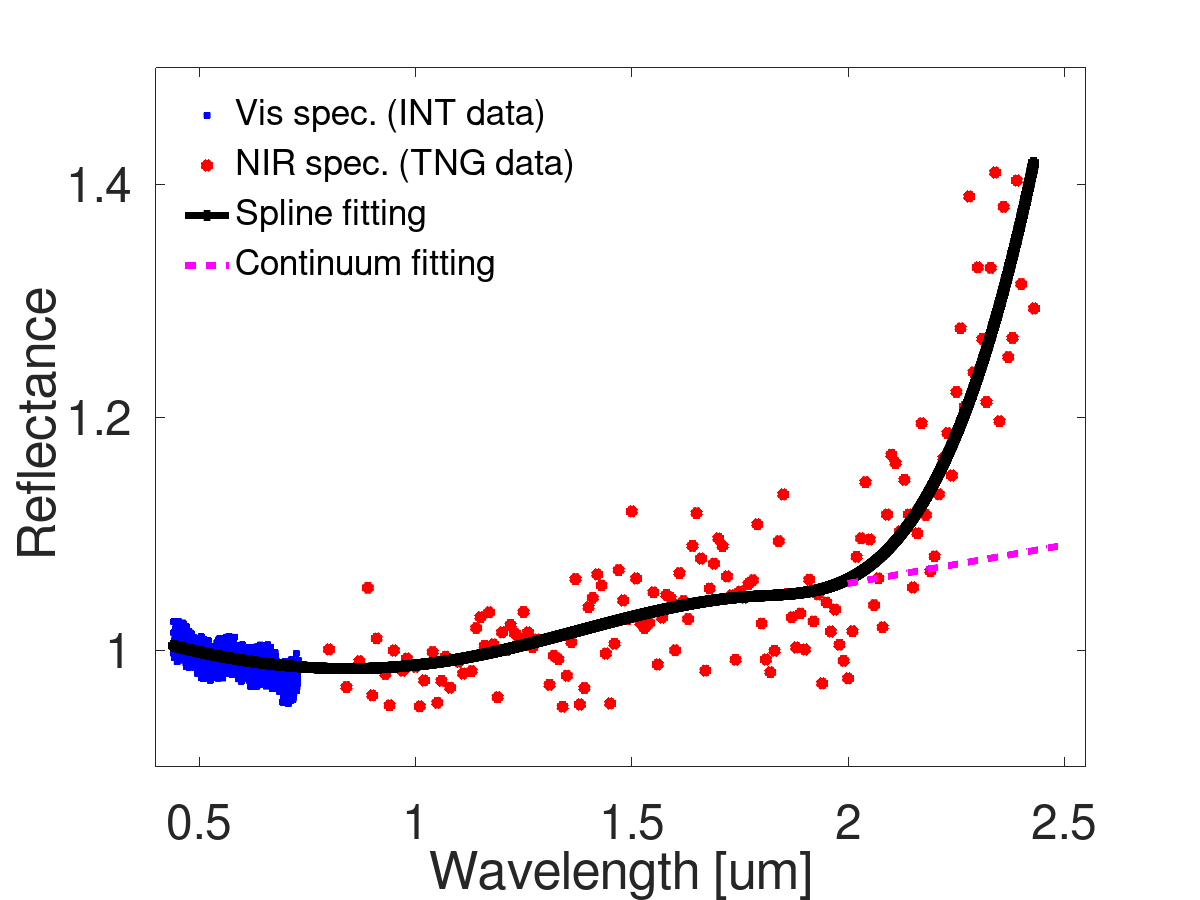 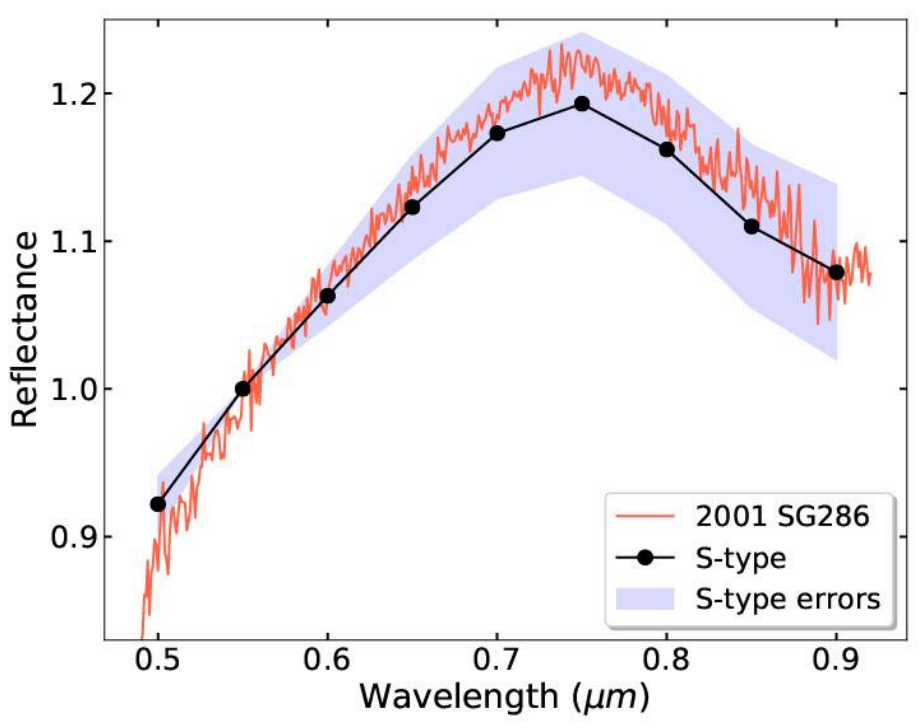 The work of RMG, and MP was supported by a grant of the Romanian National Authority for Scientific Research – UEFISCDI, project number PN-III-P1-1.1- TE-2019-1504. The work of MP, JdL, JL, is made in the framework of EU-funded project ”NEOROCKS - The NEO Rapid Observation, Characterization and Key Simulations project”, SU-SPACE-23-SEC-2019 from the Horizon 2020 - Work Programme 2018-2020, under grant agreement No 870403