On 26 September 2022 NASA's Double Asteroid Redirection Test (DART) spacecraft will impact Dimorphos, the satellite of asteroid (65803) Didymos. The impact  will change Dimorphos' orbital period around Didymos. As Didymos is an eclipsing binary, and on a close flyby of Earth on this date, the period change can be detected by Earth-based observers. Before impact, DART will deploy the Light Italian Cubesat for Imaging of Asteroid (LICIACube) that will provide images of the first instants after impact. ESA’s Hera spacecraft will rendezvous with Didymos four years after the impact. It will perform the measurements necessary to fully understand the effect of the DART impact on Dimorphos, in particular by measuring its mass, and investigating its internal structure, and thus determining the momentum transfer and detailed characterization of the crater left by DART.

Hera launch is planned for October 2024 and arrival at the Didymos system in early 2027. After arrival, it will release two cubesats, Juventas and Milani, and the three spacecraft will investigate the asteroid system for 6 months (see Figure 1). The mission is divided into several phases:

The following payload will study the surface, interior, and environment of the asteroid pair:

The Hera payload and cubesats have passed their Critical Design Reviews and are now being manufactured for delivery of the flight models in this year. 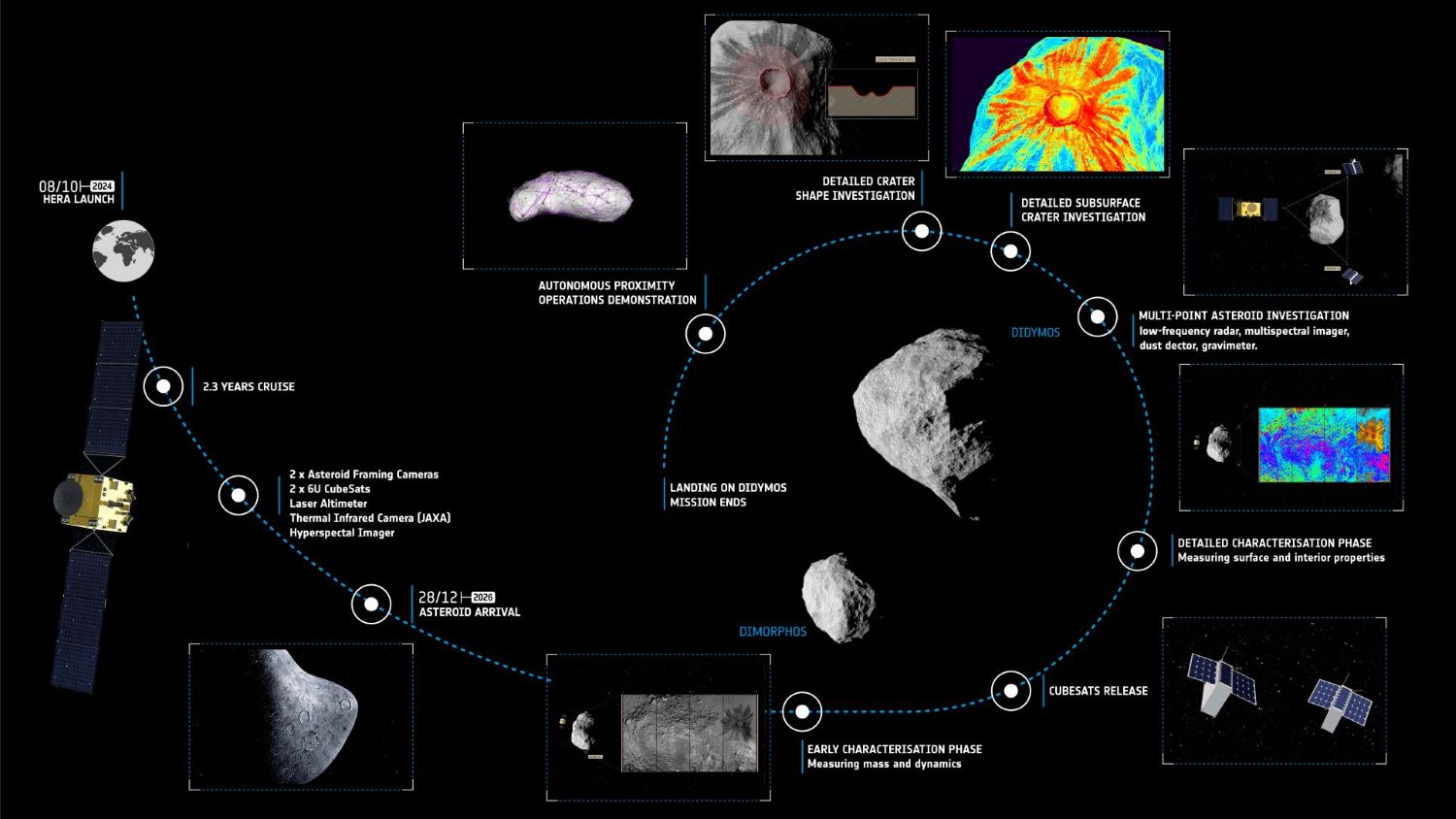 Hera will characterize in detail the properties of Dimorphos that are relevant for planetary defense. Its objectives related to the deflection demonstration are the following:

Even though its requirements are driven by planetary defence, Hera will also provide unique information on many current issues in asteroid science. The reason is that our knowledge of these fascinating objects is still poor, especially for the smallest ones. The recent data obtained by the JAXA Hayabusa2 and NASA OSIRIS-REx missions have revolutionized our understanding of carbonaceous Near-Earth Objects. Hera has the potential to perform similar as it will rendezvous for the first time with a binary asteroid. Dimorphos has a diameter of only 160 m. So far, no mission has visited such a small asteroid. Moreover, for the first time, internal and subsurface properties will be directly measured. From small asteroid internal and surface structures, through rubble-pile evolution, impact cratering physics, to the long-term effects of space weathering in the inner Solar System, Hera will have a major impact on many fields, providing answers to questions such as: How do binaries form? What does a 160 m-size rock in space look like? What is the surface composition? What are its internal properties? What are the surface structure and regolith mobility on both Didymos and Dimorphos? And what will be the size and the morphology of the crater left by DART?

5. Conclusion
The DART impact on Dimorphos and the accompanying observations by LICIACube and Earth-based observers, together with the detailed investigation of the Didymos system by Hera will be the first full scale asteroid deflection test of mankind.