We study rover-regolith interactions in low-gravity environments by conducting soft-sphere discrete element method (SSDEM) simulations with a simplified rover wheel and a bed of spherical particles. The simulations reveal that rover performance scales according to the Froude number, or a dimensionless parameter which accounts for the size of the wheel, the rotational velocity of the wheel, and gravity. This relationship provides valuable insight into how to operate rovers and analyze wheel-regolith interactions during future rover missions.

Wheeled-rovers are useful tools for identifying the surface material properties of planetary surfaces [1-3]. The sinkage and traction of a rover can be used to assess the bearing strength of a material, and the tracks left behind by a rover’s wheels can provide information regarding the density, the friction angle, and the cohesion of the regolith [3]. To maximize the scientific return from a rover mission, however, the vehicle must first be able to drive on a granular terrain in a reduced-gravity environment. Parabolic flight experiments and numerical simulations have shown that, as gravity decreases, wheel slip increases and rover traction decreases [4-6]. At the same time, wheel sinkage remains comparable for different gravity levels, at least for certain types of materials [4]. While a few models have been proposed to help explain these findings [7,8], an explicit scaling relationship between rover performance and gravity has yet to be established.

In this work, we analyze rover-regolith interactions on Earth versus a small moon, Phobos. Based on the findings of [8] and [9], we hypothesize that rolling behavior scales with gravity according to the dimensionless Froude number, Fr = Lω^2/g, where L is a characteristic length (e.g., the radius of a rover wheel), ω is the rotational velocity of the wheel, and g is gravity.

We conducted SSDEM simulations using a simplified rover wheel and the MULTICORE module of the open-source code CHRONO [10, 11]. The rover wheel is 214 mm in diameter and 53 mm in width and has 9 thin grousers that are equally spaced around a cylindrical hub. The wheel rotates at a constant speed through a bed of spherical grains and can translate freely in the horizontal and vertical directions. The grains are 6 +/- 0.5 mm in diameter and are contained within a 800x250x150 mm box. Simulations were performed using different material cases (e.g., glass beads, rough glass beads, and rough glass beads with cohesion), two gravity levels (g = 9.81 and 0.006 m/s2), and several wheel speeds (ω = 0.065-2.65 rad/s). Fig. 1 provides a snapshot of a typical simulation. We evaluate driving performance by comparing the travel distance of the wheel Δx as a function of its angular displacement Δθ. We also compare the static and dynamic sinkage of the wheel for the different simulation cases.

Fig. 1: Snapshots from a simulation where gravity is 9.81 m/s2 and the rotational velocity is 0.65 rad/s. The container is filled with 6 +/- 0.5 mm spherical particles which are colored by their vertical positions at the start of the simulation [12].

We find that static wheel sinkage is independent of gravity for simulations with cohesionless materials. Like previous works, we also find that driving performance decreases as gravity decreases for configurations with similar driving speeds (Fig. 2a). We also observe, however, that rover performance is comparable for configurations with similar Froude numbers (Fig. 2b). This means that driving on a cohesionless granular material on Earth at 0.2 m/s is like driving on the same material at 0.005 m/s on Phobos.

To understand these findings, we consider wheel-regolith interactions in terms of granular regimes. When a wheel initially sinks into a granular material, the system is in a quasi-static state. Sinkage is independent of gravity, because the reduced strength of the material is offset by the reduced weight of the wheel [4,7]. Then, as the wheel turns, the grains become fluidized, and above a certain velocity, the system enters the inertial regime. For similar wheel velocities, the system might be in a quasi-static state on Earth but in an inertial regime on Phobos. This explains why traction decreases as gravity decreases. For similar Froude numbers, however, the system will be in the same regime regardless of gravity level. Fig. 3 illustrates this point further by comparing the velocity fields of the particles in the different simulations. Overall, we demonstrate how the Froude relationship can be a powerful tool for planning rover operations and for interpreting surface interactions during future rover missions. 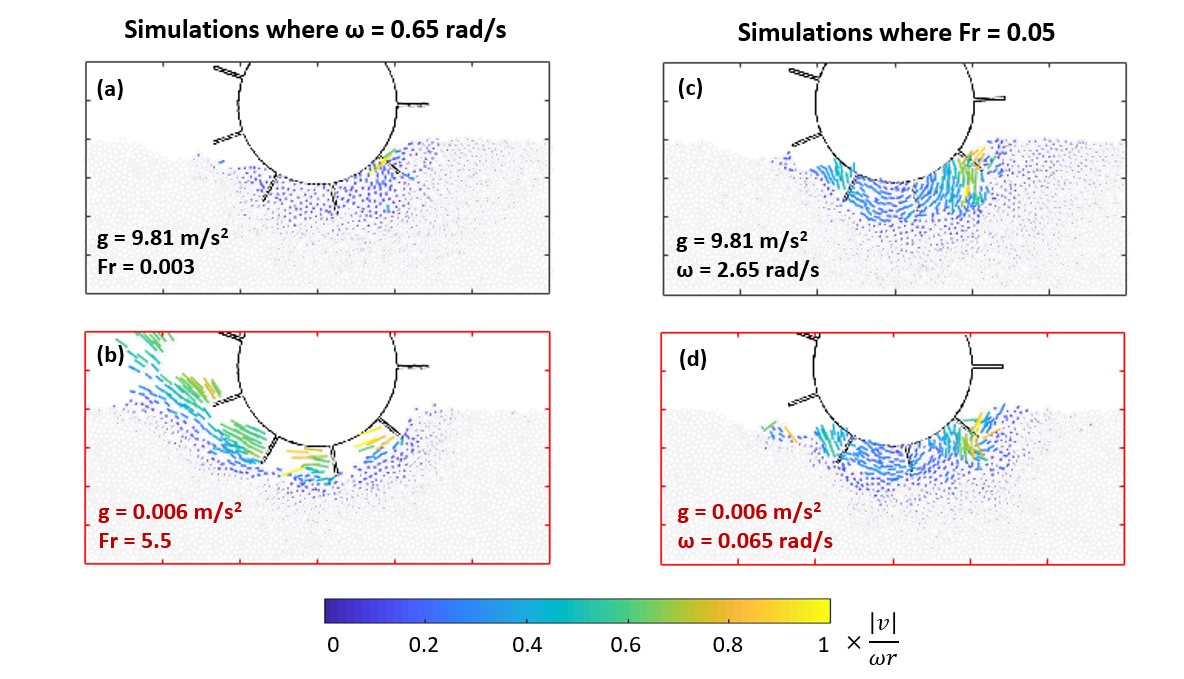 This work was funded by ISAE-SUPAERO and CNES through a PhD research grant. The simulations were conducted using HPC resources from CALMIP under grant 2019-P19030. NM acknowledges funding support from CNES.