Our modern society has become increasingly dependent on reliable technology, such as communication, navigation, and electrical power systems, which can be vulnerable to the Sun's influence. The last USA Government research on the economic impact of the occurrence of another “once in a century'' severe geomagnetic storm (such as the 1859 “super storm”), shows potential costs on the Nation’s technological infrastructures (power grid, satellites, GNSS receivers etc.) of $15-20 trillion.

We propose multi-point, multi-in-situ measurements with a low-cost constellation of nano-satellites to monitor the Earth’s magnetospheric response, at magnetic reconnection sites and  near the poles of the Earth, to various Space Weather phenomena directly associated to the solar activity,  such as Coronal Mass Ejections (CME) and Solar Energetic Particle (SEP) events). This approach complies three main aspects of nowadays research - 1) advanced low-cost technology to study phenomena that can be investigated not only 2) at better spatial and temporal resolution but to be performed through 3) synergetic and simultaneous measurements.

Nano-satellites can be conveniently used to study Space weather events, because of both their short time of development, intrinsic modularity, flexibility, which allow them to cross different boundary regions characterized by rapid changes of the occurring key physical process, and of their relatively low cost, allowing possible deployment of constellation able to cover large spatial scales .

Scientific Objectives: The objective of the ESA competition is to study and develop possible solutions for effective space weather monitoring and it’s hazards by developing dedicated small satellites as a foundation of a future constellation of satellites. The solar wind is the ultimate source of energy and is responsible for virtually all the magnetospheric dynamics. Describing and quantifying the solar wind energy transfer to the Earth's magnetosphere-ionosphere system is one of the fundamental questions in space physics. The main objective of the proposed future CUBE constellation is to identify incoming Coronal Mass Ejections (CME) and solar energetic particle (SEP) events, measure them at different magnetospheric locations and altitude to quantitatively understand the energy transport toward the Earth. One of the objectives is also to study the SEP penetration in the magnetosphere, ionization of the ionosphere, and oscillations of the magnetic field during SEP events. 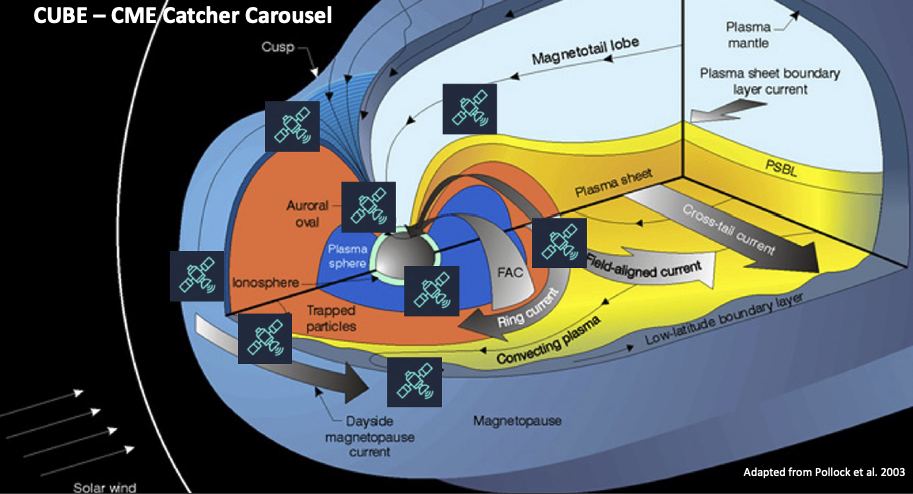 Rogue events are much rarer than standard CMEs, but are also much more energetic, thus representing a great threat for both space and Earth based infrastructures. Being rare, in-depth studies on these events are scattered and unsystematic. This uncomfortable situation could be alleviated by exploiting the new capabilities offered by nano-satellites. The scientific requirements for systematically studying CME and rogue events and the transport of energy from the reconnection sites to Earth can be achieved by a constellation of nano-satellites hosting magnetometers and sensitive particle monitors. Such a constellation could monitor four key sites (Fig. 1): the three main reconnection X-line locations, namely, near the subsolar points (1), magnetospheric flanks up to the cusp regions (2), the magnetotail (3), and the low altitude, high latitude sites where the manifestation of aurora brightening occurs (4). These are the target points for measurement of particle spectra and velocity. Such configuration will allow monitoring the response of the Earth’s ionospheric and upper atmosphere to the magnetic reconnection events in the magnetopause that brings energy through the Field Aligned Currents. For alert purposes, in order to better tune forecasting models, it is pivotal that constellation  data would be received at Earth in nearly real time.

State of the art technology and developments needed for TRL advancement

We will perform a trade-off study using payloads already at TRL9 (for example the Next Generation Radiation Monitor[1]), and developing a dedicated payload based on the experience matured for the HERMES pathfinder payload (currently at TRL 6, planned to reach TRL 9 in one year from now) and CSES-Limadou project [2].

The baseline mission analysis, to be confirmed during the study, includes two 6U spacecraft on circular SSO and six 12U spacecraft on a highly energetic circular orbit, ~60000 km radius, phased 60 degrees away from one another. All units will be equipped with magnetometers, plasma analyzer, and particle monitors capable of measuring magnetic field strength of a few nT,  proton spectra from a few tens keV to a few hundred MeV, and electron spectra up to a few hundred keV.  The preliminary analysis of the mission suggests a three-year period for deploying in orbit the constellation of  6-8 nano-satellites of the 6-12U class.

There is accumulating evidence that our technology is becoming more susceptible to space weather hazards, especially spacecraft since their payloads are becoming more sophisticated. The presented mission concept will be focused on the following space weather effects: 1) radiation damage to spacecraft electronics and other materials from radiation belt and solar energetic particles; 2) drag by the upper atmosphere, which is subject to changes in solar radiation and magnetospheric particle input; 3) interference with electromagnetic signals due to the response of the ionosphere to changes in solar input, geospace storms, and charged particle precipitation.

The mission study began in April 2022 with an estimated duration of 10 months, which means completion by the beginning of February 2023.