Near-Earth objects (NEOs) deserve our attention because they pose an impact risk for Earth. A good example is the Chicxulub impactor that produced the Cretaceous/Tertiary mass extinction event 65 Myr ago (Bottke et al. 2007). Up to now, more than 1 milion of asteroids have been discovered, and about 28,700 are cataloged as NEOs. This number steadily increases every month. Even if this currently known population of NEOs does not pose a direct threat to humanity within the next century, we are not able to assert that tomorrow we will not discover an asteroid capable of wiping out life on Earth in the next years.

Within the NEO population there is a subclass defined potentially hazardous asteroids (PHAs). These are objects with an orbit that can make close approaches to the Earth (whose minimum orbit intersection distance, or MOID, to Earth’s orbit is smaller than 0.05 AU), and large enough (absolute magnitude H ≤ 22, or equivalent diameter above ∼140 m, assuming the average NEO albedo of 0.14) to cause significant regional damage in the event of impact. Currently, more than 2200 NEAs are classified as PHAs.

Any mitigation strategy designed for a potential impact is dependent on the ability to determine the asteroid’s physical properties (Perna et al. 2016): the damage produced by a possible collision will mainly depend on the speed of the impact, the size of the object, and its composition. In this context, the knowledge of the physical properties of PHAs is still poor, with less than 15% having their taxonomies determined (∼300 objects). Due to this, improving our understanding on PHAs and their composition is essential for planning space-missions aimed to develop preventive actions against potential impacts (e. g. Cheng et al. 2018).

For the present work, we have investigated the physical nature of several PHAs, using data obtained within the framework of the Visible NEAs Observations Survey (ViNOS). We analyzed and characterized a sample comprised of 14 of these objects. To conduct this study, we obtained visible spectra of these 14 PHAs in the 0.5-0.9 μm region using the 2.5m Nordic Optical Telescope, located at the El Roque De Los Muchachos Observatory in La Palma (Spain). The resulting spectra were combined with their corresponding near-infrared counterparts, available in the literature from SMASS. We performed a taxonomical classification of the spectra, and computed several diagnostic spectral parameters (slopes, band centres, and band area ratios). We also compared the spectra with laboratory spectra of meteorites from the RELAB database. Among the studied sample of PHAs, approximately 90% of the objects (13 out of 14) were classified as silicaceous (S-types and subclasses). Only one object, 489486, was classified as carbonaceous. Five of the studied PHAs did not previously have taxonomical classifications. The comparisons of the silicaceous PHAs with meteoritic spectra all yielded ordinary chondrites (OCs) as the best match for meteoritic analogs, and the computed mineralogy of all of our targets is consistent with this results (see Fig. 1). 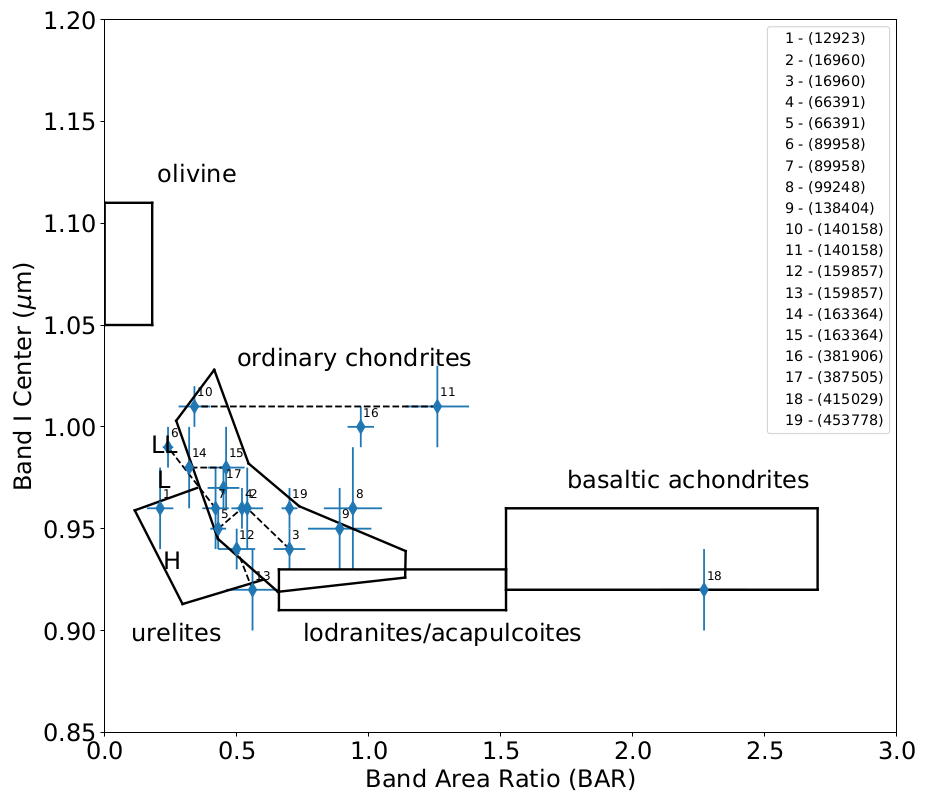 Fig. 1. Distribution of the studied asteroids BAR versus Band Center I space. The enclosed regions are taken from Dunn et al. (2013), which follow the results of Gaffey et al. (1993), Burbine et al. (2001), and Cloutis et al. (2010). Asteroids with two NIR spectra, and thus, two sets of spectral parameters, are connected by a dashed line. The numbers represent the corresponding object (when repeated, refers to its second spectrum).