More than 10^7 kg of extraterrestrial objects or meteoroids ranging in size from a few microns to tens of meters in diameter enter the Earth’s atmosphere every year. A small fraction of these yields free samples of extraterrestrial matter - meteorites - for laboratory study. The majority, which burn up or ablate completely in the Earth’s atmosphere, appear as visible meteors in the night sky. Recording meteor activity and modelling the process of ablation allow us to measure directly the flux of small planetary impactors. This provides the 'ground truth' for estimating present cratering rates and planetary surface ages by implication.

The application of the latest observational and modeling techniques has rendered meteor science as one of the leading avenues for investigating the nature and origin of interplanetary matter and its parent bodies. This session will provide a forum for presenting fundamental results and novel ideas in this area and informing the broader planetary science community of the interdisciplinary impact of present and future work. 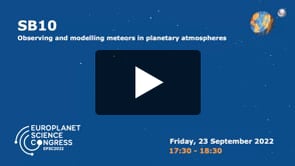 Introduction: Recent expansions in fireball networks has lead to an increase in the number of events recorded each night. Due to the mechanism at the source of the detection procedure (i.e. tracking sources of light), the majority of the events is comprised of false meteors. These make their way in trajectory computations, and lead to erroneous orbits [e.g. 1].

Aims: For this study we explore several machine learning (ML) models for their ability to filter the false detections.

Methods: First, a supervised validation was employed on the meteor detections obtained by stations within the Meteorites Orbits Reconstruction by Optical Imaging (MOROI) network [1, 2], between 2017-2020.  Next, a set of ML models suited for classification were applied to a selection of features computed from the data. Finally, each model was tuned to their optimal hyper-parameter value, to obtain the highest score.

Results: The Neural networks method was found to best filter out the false meteors, with a recall score of 96%, followed by 95% for Gradient Boost and Random Forest algorithms. The score is expected to increase when employing a spatio-temporal filter and pixel brightness information. The results entail follow-up studies on the currently expanding FRIPON network [4].

Cosmic dust consists of mineral grains that are held together by a refractory organic "glue", and it has been proposed that loss of the organics during atmospheric entry can lead to the fragmentation of dust particles into sub-micron sized fragments (Campbell-Brown 2019). If this happens, there are several important implications in the Earth’s atmosphere: 1) slow-moving particles may be undetectable by radar, so that the total dust input could be considerably larger than current estimate of around 30 tonnes per day that is required to explain the measured vertical fluxes of Na and Fe atoms in the mesosphere, and the accumulation rate of cosmic spherules and unmelted micrometeorites at the surface (Carrillo-Sánchez et al. 2020, Rojas et al. 2021); 2) meteoritic fragments may freeze stratospheric droplets in the polar lower stratosphere, producing polar stratospheric clouds that cause ozone depletion (James et al. 2018); and 3) the anomalously large measured accumulation rates of meteoritic material in polar ice cores may be better explained (Brooke et al. 2017). Meteoritic fragmentation may also supply nuclei for the formation of ice clouds in other planetary atmospheres, such as Mars (Plane et al. 2018).

At Leeds we have developed a new experimental system for studying the pyrolysis of the refractory organic constituents in cosmic dust during atmospheric entry (Bones et al. 2022). The pyrolysis kinetics of meteoritic fragments was measured by mass spectrometric detection of CO2 at temperatures between 625 and 1300 K. The complex time-resolved kinetic behaviour is consistent with two organic components – one significantly more refractory than the other, probably corresponding to the insoluble and soluble organic fractions, respectively (Alexander et al. 2017). The measured temperature-dependent pyrolysis rates were then incorporated into the Leeds Chemical Ablation Model (CABMOD) (Vondrak et al. 2008), which demonstrates that organic pyrolysis should be detectable using high performance large aperture radars (Bones et al. 2022). Atomic force microscopy was used to show that although the residual meteoritic particles became more brittle after organic pyrolysis, they will nevertheless withstand stresses that are at least 3 orders of magnitude higher than would be encountered during atmospheric entry. This suggests that most small cosmic dust particles (radius < 100 μm) will not fragment during entry into the atmosphere as a result of organic pyrolysis (Bones et al. 2022).

However, a subset of slow-moving, low density particles with a large organic component, as observed in fresh cometary particles such as those in the coma of comet 67/P (Mannel et al. 2019), could fragment into sub-micron meteoritic particles that would survive entry. In fact, meteoritic fragments with a size distribution peaking around radius = 250 nm have been observed in the Arctic polar vortex (Schneider et al. 2021). Experiments in our laboratory show that meteoritic fragments, as well the nanometre-sized meteoric smoke particles which form from the condensation of metallic vapours produced by meteoric ablation in the upper mesosphere, are very effective ice nuclei. On Earth, these particles can facilitate the freezing of polar stratospheric cloud droplets, and may also play a role in the freezing of clouds in the middle atmospheres of Mars and Venus.

This talk will introduce the The Canary Island Long-Baseline Observatory (CILBO), a double station meteor camera setup located on the Canary Islands and operated by ESA’s Meteor Research Group since 2010.

Our observations of meteors are obtained in the visual wavelength band by intensified video cameras from both stations, supplemented by an intensified video camera mounted with a spectral grating at one of the locations. The cameras observe during cloudless and precipitation-free nights and data are transferred to a main computer located at ESA/ESTEC once a day. The image frames that contain spectral information are calibrated, corrected, and finally processed into line intensity profiles. An ablation simulation, based on Bayesian statistics using a Markov-Chain Monte-Carlo method, allows to determine a parameter space, including the ablation temperatures, chemical elements and their corresponding line intensities, to fit against the line intensity profiles of the observed meteor spectra. The algorithm is presented in this talk. Several hundred spectra have been processed and will be made available through the Guest Archive Facility of the Planetary Science Archive of ESA.

When meteoroids hit Earth’s atmosphere molecules, they leave a trail of plasma behind. This region, composed of free electrons and positively charged ions, is capable of reflecting radio signals. The analysis of such signals along the meteoroid path can be used for various scientific purposes: quantification of the electron line density, analysis of the thermosphere properties, characterization of the meteor ablation process, etc. To achieve these objectives, the meteoroid trajectory needs first to be determined.

The reflection on the plasma trails is usually assumed to be specular, which means that the radio wave is reflected only at a given point along the meteoroid trajectory. For forward scatter systems, the position of this specular point depends on the trajectory on the one hand, and on the position of both the emitter and the receiver on the other hand. Using non-collocated receivers, one obtains several specular points along the trajectory. The receivers will thus detect the reflected signal at different time instants on a given trajectory.

In this work, we propose a method that aims at reconstructing meteoroid trajectories using only the time differences of the meteor echoes measured at the receivers of a forward scatter radio system, such as the BRAMS (Belgian RAdio Meteor Stations) network. The latter uses the forward scatter of radio waves on ionized meteor trails to study meteoroids falling in the Earth’s atmosphere. It is made of a dedicated transmitter and 42 receiving stations located in and nearby Belgium. Given that all the BRAMS receivers are synchronized using GPS clocks, we can compute the time differences of the meteor echoes and use them to find the meteoroid trajectory.

Assuming a constant speed motion, the position (three degrees of freedom) and the three velocity components have to be determined. This inverse problem is non-linear and requires the definition of a target objective to minimize. Two different formulations are compared: the first one is based on the minimization of the bistatic range while the second one uses a forward model, which defines the trajectory as being tangential to a family of ellipsoids whose loci are the emitter and each receiver. A Monte-Carlo analysis is performed to highlight the sensitivity of the output trajectory parameters to the input time differences.

The BRAMS network also includes an interferometer in Humain (south of Belgium). Unlike the other receiving stations, it uses 5 antennas in the so-called Jones configuration (Jones et al., 1998; Lamy et al., 2018) and allows to determine the direction of arrival of the meteor echo to within approximately 1°. In that case, the problem becomes much easier to solve because the interferometer gives information about the direction of a reflection point. The benefits brought by such a system regarding the accuracy of the trajectory reconstruction are highlighted.

The post-processing steps allowing to extract meteor echoes from the raw radio signals are described. An approach to properly filter out the direct beacon signal is introduced. Indeed, each receiver detects a more or less strong direct signal coming from the transmitter. This signal does not contain any information about the meteor path since it simply propagates through the atmosphere and is not reflected on the meteor trail. Knowing that the BRAMS transmitter emits a continuous cosine wave, the amplitude, the frequency and the phase are fitted in the frequency domain. The beacon signal is finally reconstructed in the time domain and subtracted. This process in illustrated in the following figure, which shows an example of spectrograms (i.e. time-frequency maps where the power is color-coded) before and after the beacon signal subtraction. The proper removal of the horizontal line at around 1005 Hz (corresponding to the direct signal) is apparent in the bottom spectrogram.