The Io Volcano Observer (IVO) [1] is a NASA Discovery mission currently under Phase A study [2]. Its primary goal is a thorough investigation of Io (e.g., [3]), the innermost of Jupiter's Galilean moons and the most volcanically active body in the Solar system. The strategy consists of the observation of Io mainly during ten targeted flybys [4] between August 2033 and April 2037. At this time, IVO will orbit Jupiter on highly eccentric orbits with periods between 78 and 260 days, a minimum Jupiter altitude of ~340000 km, apoapsis distances between 10 and 23 million kilometers, and an orbit inclination of ~45°. Among the remote-sensing and field-and-particle instruments, there are also a narrow-angle camera (NAC; clear aperture of ~15 cm; pixel field-of-view of 10 µrad) and an infrared mapping instrument (TMAP).

The irregular moons of Jupiter [5] are a group of Solar system objects which is poorly studied. With 71 currently known objects ranging in size from ~150 x 120 km  (Himalia) down to ~2 km, they are the largest sub-group of Jovian moons with respect to quantity. Irregular moons are believed to be remnants from catastrophic collisions of progenitor objects suspected to have been trapped by Jupiter in the early history of the Solar system. Many details and characteristics, including their region of origin and their relationship to other small bodies, are not known [6].

The first irregular-moon inventory by a spacecraft orbiting the host planet was successfully performed within the Saturn system by the Cassini spacecraft [7] [8]. Especially in the second half of the mission, approximately one or two days per orbit were used to observe Saturn's irregular moons, resulting in more than 200 observations of these objects. Since Saturn's irregulars were between 4 and >30 million kilometers away from Cassini (except for the targeted Phoebe flyby in June 2004), the objects appear smaller than a pixel in the imaging data. From photometric time series observations, lightcurves were extracted. These lightcurves allowed determination of 24 previously unknown rotation periods and 13 pole solutions, shape models, and phase curves. No such inventory has been done so far at Jupiter, Uranus, or Neptune systems.

Irregular moons are difficult to observe from Earth using small and mid-sized telescopes because of their small sizes (most diameters are below 10 km) and thus faint appearance (most are darker than 23rd magnitude). In addition, there is a significant straylight problem from bright Jupiter. Furthermore, since they are quite numerous, thorough inventories are not possible because there are not enough large telescopes available.

With a spacecraft like Cassini or IVO orbiting close to these objects, the situation improves fundamentally. No large telescopes are needed anymore because the objects appear much brighter, and because the angular distances to the planet are large. In addition, the long orbits of IVO offer plenty of uninterrupted observation time over many hours and days. In addition, a large phase-angle range as well as out-of-orbit plane observations are possible, adding crucial information that is not possible to achieve from Earth.

Similar to the campaign with Cassini at Saturn, the major scientific goal of IVO's observations of irregular moons is to determine fundamental physical properties such as rotation periods, pole directions, sizes, and brightnesses as a function of illumination conditions (phase curves), as well as to provide constraints on object shapes (convex-shape models). This campaign would address many of the fundamental research goals formulated for small Solar system bodies by NASA's Small Bodies Assessment Group [9] [10]. These goals include the role of the irregulars in Solar system formation and dynamical evolution; a more complete understanding of the census, architecture, physical properties (size, shape, mass, density, porosity, spin rate, etc.), surfaces, surface alteration processes, and nature of interiors, as well as relationships to other bodies, events, and processes. With IVO, fundamental remote-sensing data can be obtained to move closer to achieving these goals. Since IVO's orbits are very long, this mission provides an ideal platform for a detailed survey campaign of these intriguing bodies. Performing coordinated observations with other missions (like ESA's JUICE), or combining observations with laboratory measurements (as proposed in the IVO mission as well) will improve the overall value and interpretation of the collected data. 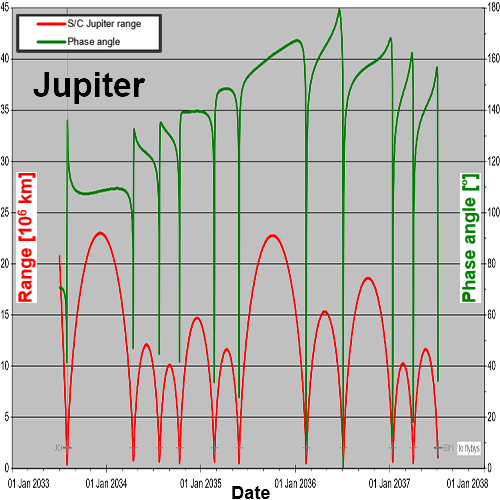 Fig. 1: Range (red line) and phase angle (green) of Jupiter as seen from IVO during the orbit tour. 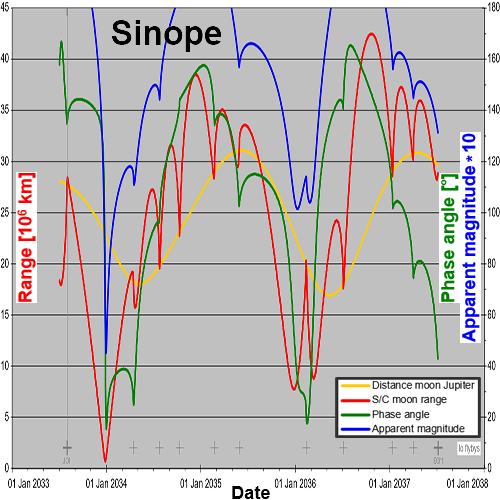 Fig. 2: Range, phase angle, and apparent magnitude of Jovian irregular moon Sinope (J9; ø ~ 35 km) as seen from IVO. This plot illustrates the potential of IVO observations of irregular moons. Sinope is the irregular moons where IVO comes closest in the current orbit tour. On 27 Dec 2033, the minimum distance will be 690000 km. In the IVO-NAC, the size of Sinope will be ~6 pxl at this time.