Space missions have provided a wealth of data on the atmospheres and aeronomy of rocky planets and moons, from the lower layers up to the external envelopes in direct contact with the solar wind. A recent emerging finding is evidence that the atmosphere behaves as a single coherent system with complex coupling between layers.

This session solicits contributions that investigate processes at work (chemistry, energetics, dynamics, electricity, escape etc...) on the terrestrial bodies of the Solar System and includes studies of the coupling between the lower/middle and upper atmospheres. Contributions based on analysis of recent spacecraft and ground-based observations, comparative planetology studies, numerical modelling and relevant laboratory investigations are particularly welcome. The session will consist of invited and contributed oral talks as well as posters.

Main reactions of production and loss of C3H4 are shown in Figure 2. Column abundances of some species in the model and its previous version are shown in Table 1 along with production and loss rates, escape and precipitation flows, and chemical lifetimes. The HC3N abundance of 2.3×1013 cm-2 in the model is close to the upper limit of 2×1013 cm-2 (Lellouch et al. 2017). The change in the model increases H2 and C3H8 by factors of 1.3 and reduces H and C4H2 by factors of 1.3, while the other species remain almost unchanged relative Krasnopolsky (2020).

Nitrogen isotope ratio. The observed lower limit HC14N/HC15N > 125 on Pluto (Lellouch et a. 2017) agrees with 14N/15N in the planets, asteroids, comets, and the solar wind. However, it looks puzzling compared to HC14N/HC15N = 60 on Titan that is perfectly explained by predissociation of N2 at 80-100 nm (Liang et al. 2007, Krasnopolsky 2016). Both Pluto and Titan have nitrogen-methane atmospheres with significant similarity in photochemistry.

Major reactions of production and loss of HCN on Pluto are given in Table 2. Our analysis confirms predissociation of N2 at 80-100 nm as the major process of nitrogen isotope fractionation on Pluto. Kinetic isotope effect induced by difference of reduced mass of the reactants is very small, for example, k14/k15 = 1.006 for CH + HCN → CHCN + H. Our calculation gives negligible photo-induced isotope fractionation for HCN. Isotope fractionation in condensation of ammonia is calculated at 1.04 for Pluto’s conditions using measurements by King et al. (1989). This value is adopted for HCN on Pluto.

The observed twofold difference on Pluto is partially caused by diffusive depletion of the heavy isotope in HCN and in predissociation of N2. On Pluto, mean altitudes of HCN and predissociation of N2 are 500 and 860 km, well above the homopause at 96 km. On Titan, the observations of HC14N/HC15N refer to 90-460 km (Vinatier et al. 2007), predissociation happens near 985 km, both below the homopause at 1000 km, and diffusive depletion does not occur. Therefore the observed limit corresponds to 14N/15N > 253 for N2 in the lower atmosphere and 14N/15N > 228 in the upper layers of the N2 ice. These limits reflect the conditions on Pluto in the last two million years. The current loss of N2 is 37.5 g cm-2 Byr-1 primarily to photodestruction. The c­alculated isotope fractionation factor of 1.96 accounts for formation and condensation of nitriles, diffusive separation, and fractionation in thermal escape. Variations of 14N/15N in the N2 ice are relevant to evolution of the solar EUV, mixing processes in the N2 ice, and possible periods of hydrodynamic escape that are poorly known and not considered here.

The infrared absorption spectrum of carbon dioxide-rich planetary atmospheres, such as Venus or ancient Mars, can be difficult to model due to the presence of collision-induced absorption (CIA) features. These features appear in the 0-250 cm-1 region and are caused by the interaction-induced (I-I) dipole moments of carbon dioxide dimers. Studying these I-I dipole moments can lead to more accurate atmospheric models, which may then be used to create better estimates of the surface temperature of these planets thus revealing information about their climates either now (for Venus) or in the ancient past (for Mars).

To investigate the I-I dipole moments of CO2 dimers, a finite-field approach was used to calculate the response properties of a carbon dioxide monomer, along with the energies and dipole moments of a T-shaped CO­2 dimer as a function of the intermolecular distance. Using the monomer results as fitting parameters, functions modeling these dipole moments were developed and compared to an analytically developed equation by M. S. A. El-Kader and G. Maroulis [1]. The resulting models for the I-I dipole moments presented here are thus based on purely ab initio results and are independent of any experimental variables.

The response properties of the carbon dioxide monomers and the energies and dipole moments of the CO­2 dimers were calculated using the GAMESS-US ab initio software program and the NWChem ab initio software program. The I-I dipole moment equations were developed using the aug-cc-pVTZ basis set at the RHF, MP2, CCSD, and CCSD(T) levels of theory and the aug-cc-pVQZ and aug-pc-3 basis sets at the RHF and MP2 levels of theory. We have, to the best of our knowledge, reported the first purely ab initio I-I dipole moment model of a CO2 dimer. The resulting functions had a maximum absolute error below 10-3 au as shown in Figure 1, indicating that the functions provide an accurate description of the ab initio I-I dipole moments. 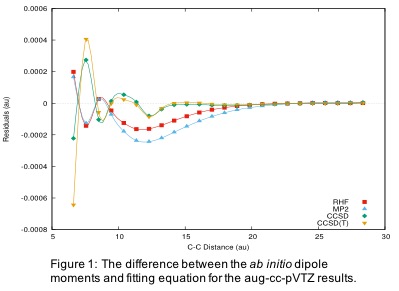 The Mars Exploration Rovers (MER), Spirit and Opportunity, landed on Mars in 2004 just weeks apart. Using spectra from the Miniature Thermal Emission Spectrometer (Mini-TES), both rovers were able to sample the lowest 2 km of the vertical temperature profile of the atmosphere. During a single observation for Mini-TES, spectra were taken every two seconds with observations lasting up to 42 minutes. While results up to this point have averaged the spectra together to retrieve information on dust, water vapor and temperature, individual temperature retrievals are possible every two seconds and contain information on short timescale atmospheric fluctuations. These fluctuations are indicative of boundary layer behavior at each site. We have retrieved the vertical temperature profile from individual spectra and have used these profiles to assess boundary layer conditions at each rover location. We will present temperature profiles from individual retrievals and identify and characterize fluctuations within these profiles. We will also show the seasonal variation of these fluctuations over the first 1200 sols (nearly 2 Mars Years) for both Spirit and Opportunity rovers.

In this work, we compare simulation of the precipitating flux for different solar wind dynamic pressure with MAVEN observations. In particular, we focus on the fluxes of precipitating ion towards Mars' atmosphere as seen by MAVEN/SWIA (cs product), an energy and angular ion spectrometer [1]. We also use LatHyS, which is a 3D multispecies parallelized hybrid model that describes the formation of Mars electromagnetic environment induced by its interaction with the solar wind [2].

We will present how the precipitating ion flux, measured by MAVEN/SWIA, is influenced by the solar wind dynamic pressure and will analyze these observations by comparison with simulation results.

Comparing MAVEN observations with models improves our understanding of the parameters that control the precipitating ion flux. By defining two sets, characterized by different solar wind dynamic pressure and modelling them, we present the comparison between models and observations.

This work was supported by the DIM ACAV and the ESA/ESTEC faculty. This work was also supported by CNES “Système Solaire” program and by the “Programme National de Planétologie” and “Programme National Soleil-Terre”. This work is also part of HELIOSARES Project supported by the ANR (ANR-09-BLAN-0223), ANR MARMITE (ANR-13-BS05-0012-02) and ANR TEMPETE (ANR-17-CE31-0016). Spacecraft data used in this paper are archived and available in the Planetary Data System Archive (https://pds.nasa.gov/). Numerical simulation results used in this article can be found in the simulation database (http://impex.latmos.ipsl.fr).