The problem of the delivery of water to the terrestrial planets was studied by several scientists (see references e.g. in [1]). Below I present the results of migration of planetesimals under the gravitational influence of 7 planets (from Venus to Neptune). In each variant of the calculations, the initial values of semi-major axes of orbits of 250 planetesimals varied from amin to amin+da with da=0.1 AU, their initial eccentricities equaled to eo, and the initial inclinations equaled to eo/2 rad. amin varied from 3 to 4.9 AU with a step of 0.1 AU, eo=0.02 or eo=0.15. The calculations of the probability pE of a collision of a planetesimal with the Earth were made similar to those in [1-3]. In [1-3], it was concluded that the total mass of water delivered to the Earth from outside Jupiter’s orbit could be about the mass of Earth’s oceans for the total mass of planetesimals beyond that orbit about 200 Earth’s masses.

For some values of amin and eo, the values of pE calculated for 250 planetesimals can differ by a factor up to several hundreds for different calculations with almost the same initial orbits. This difference can be caused by that one of thousands of planetesimals could move in an Earth-crossing orbit for millions of years. Such difference was also noted earlier in [2-3] for initially Jupiter-crossing objects. The mean time of motion of a former Jupiter-crossing object in Earth-crossing orbit was about 30 Kyr.

For some calculations at amin from 3 to 3.8 AU, there was a considerable growth of pE after 10 Myr. At T=100 Myr and 3≤amin≤4.9 AU, the values of pE vary from values less than 10-6 to values of the order of 10-3 (and of 0.01 at T=1000 Myr), but they are often between 10-6 and 10-5, as for many our previous calculations with amin≥5 AU. There were more runs with pE>2×10-5 for 3.2≤amin≤3.3 AU, amin=3.5 AU and 3.7≤amin≤4.1 AU than for other values of amin, including the values of amin≥5 AU. The delivery of water and volatiles from such distances from the Sun was more effective (up to hundreds of times for some initial data) than from other distances. It is not clear how much material was at distances from 3 to 4 AU from the Sun, compared to that in the zone of the giant planets. If we suppose that the density of a protoplanetary disk is proportional to R-0.5, then the ratio of the mass of material with a distance R from the Sun between 4 and 15 AU is greater by a factor of 209/7≈30 than that with R between 3 and 4 AU. For such a model, the amount of material delivered to the Earth from the outer asteroid belt can be comparable with the amount of material delivered from the zone of Jupiter and Saturn.

The characteristic velocities of collisions with the Moon and the Earth of bodies in calculations with amin from 3 to 15 AU were mainly from 20 to 23 km/s and from 23 to 26 km/s, respectively. The characteristic velocities of collisions of planetesimals from the feeding zone of the terrestrial planets with the Moon varied from 8 to 16 km/s depending on initial semi-major axes and eccentricities of planetesimals. 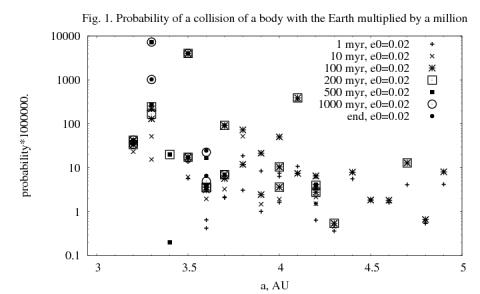 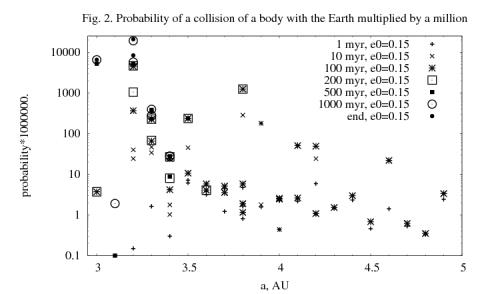