Computational and experimental astrophysics of small bodies and planets

The goal of this session is to cover numerical simulations and relevant laboratory investigations related to the Small Bodies (comets, KBOs, rings, asteroids, meteorites, dust), their formation and evolution, and the instruments of their exploration. This session is specially focused on the interdisciplinary approach in the development of models (formal descriptions of physical phenomena), experiments (on ground and in micro-gravity), and mathematical simulations (computational methods and algorithms of solution) of various astrophysical phenomena: (i) dusty gas cometary atmospheres; (ii) volcanic activity on icy satellites (e.g. Enceladus and Io); (iii) planetary body formation (e.g. via pebbles growth), and planetesimal dynamics.

This session will include an introduction and discussion of new and/or existing laboratory studies in simulated space-like environments and models, experimental techniques, computational methods that can address the results of analytical, experimental and numerical analysis (with respect to computational methods and algorithms of solution) on the above described studies.

Abstracts on thermophysical evolution models of small bodies interiors as well as on the modeling of atmosphere and exosphere are welcome. 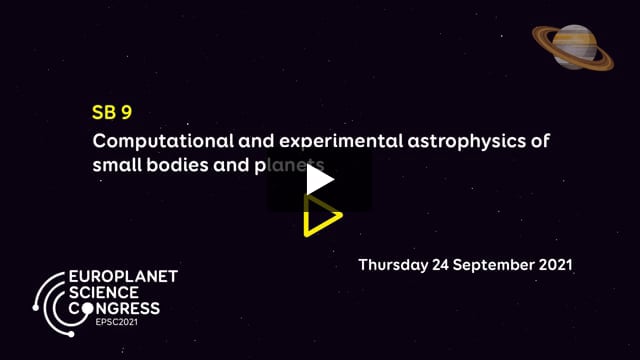 Chairpersons: Stavro Lambrov Ivanovski, Vladimir Zakharov
EPSC2021-100
Migration of planetesimals to the Earth and the Moon from the region of the outer asteroid belt
Sergei Ipatov

The problem of the delivery of water to the terrestrial planets was studied by several scientists (see references e.g. in [1]). Below I present the results of migration of planetesimals under the gravitational influence of 7 planets (from Venus to Neptune). In each variant of the calculations, the initial values of semi-major axes of orbits of 250 planetesimals varied from amin to amin+da with da=0.1 AU, their initial eccentricities equaled to eo, and the initial inclinations equaled to eo/2 rad. amin varied from 3 to 4.9 AU with a step of 0.1 AU, eo=0.02 or eo=0.15. The calculations of the probability pE of a collision of a planetesimal with the Earth were made similar to those in [1-3]. In [1-3], it was concluded that the total mass of water delivered to the Earth from outside Jupiter’s orbit could be about the mass of Earth’s oceans for the total mass of planetesimals beyond that orbit about 200 Earth’s masses.

For some values of amin and eo, the values of pE calculated for 250 planetesimals can differ by a factor up to several hundreds for different calculations with almost the same initial orbits. This difference can be caused by that one of thousands of planetesimals could move in an Earth-crossing orbit for millions of years. Such difference was also noted earlier in [2-3] for initially Jupiter-crossing objects. The mean time of motion of a former Jupiter-crossing object in Earth-crossing orbit was about 30 Kyr.

For some calculations at amin from 3 to 3.8 AU, there was a considerable growth of pE after 10 Myr. At T=100 Myr and 3≤amin≤4.9 AU, the values of pE vary from values less than 10-6 to values of the order of 10-3 (and of 0.01 at T=1000 Myr), but they are often between 10-6 and 10-5, as for many our previous calculations with amin≥5 AU. There were more runs with pE>2×10-5 for 3.2≤amin≤3.3 AU, amin=3.5 AU and 3.7≤amin≤4.1 AU than for other values of amin, including the values of amin≥5 AU. The delivery of water and volatiles from such distances from the Sun was more effective (up to hundreds of times for some initial data) than from other distances. It is not clear how much material was at distances from 3 to 4 AU from the Sun, compared to that in the zone of the giant planets. If we suppose that the density of a protoplanetary disk is proportional to R-0.5, then the ratio of the mass of material with a distance R from the Sun between 4 and 15 AU is greater by a factor of 209/7≈30 than that with R between 3 and 4 AU. For such a model, the amount of material delivered to the Earth from the outer asteroid belt can be comparable with the amount of material delivered from the zone of Jupiter and Saturn.

The characteristic velocities of collisions with the Moon and the Earth of bodies in calculations with amin from 3 to 15 AU were mainly from 20 to 23 km/s and from 23 to 26 km/s, respectively. The characteristic velocities of collisions of planetesimals from the feeding zone of the terrestrial planets with the Moon varied from 8 to 16 km/s depending on initial semi-major axes and eccentricities of planetesimals.

We present a semianalytical model that describes the resonance strength, width in au, location and stability of fixed points, and periods of small-amplitude librations [1]. The model is valid for any two gravitationally interacting massive bodies, and is thus applicable to planets around single or binary stars with arbitrary eccentricities and inclinations. The model assumes some simplifications that limit its validity in some specific cases, mainly for first order resonances at very small eccentricities. In spite of these simplifications the model shows as very helpful to understand the properties of the planetary resonances and its potential is revealed at high eccentricities and/or high inclinations. In particular, it is very simple to generate atlas of resonances for a given planetary system, that means, the domains of the resonances in the plane (a,e) or (a,i). In Fig. 1 we show an example for the system HD31527, where the atlas calculated with the model predicts that the two outher planets are in the resonance 16/3. When one of the bodies has negligible mass, the model reproduces the results of the restricted, asteroidal, case [2]. In this talk we also show how to apply the model and the use of the codes which are available at http://www.fisica.edu.uy/~gallardo/atlas/plares.html.

Fig. 1. Atlas of resonances (white lines) near the outher planet of the system HD31527 and corresponding MEGNO map of the region (colored background). Dark blue corresponds to more regular orbits, and lighter tones of green indicate increasingly chaotic motion. The location of the outer planet is shown with a filled yellow circle. The libration widths of the most relevant MMRs determined with the model are plotted as white lines showing that the outher planet is well placed inside the resonance 16/3 with the middle planet [1].

We are interested in systems where two phases coexist: a solid phase with a high effective viscosity, and a low-viscosity liquid phase which fills the porosity of the solid phase. Two-phase systems, or "mush", are common in planetary sciences: magma extraction, Earth's inner core, icy moons... On terrestrial or icy bodies, such biphasic layers can compact under their own weight, which leads to the extraction of the liquid phase from the solid phase, and compaction of this solid phase. We present here a new model of two-phase flows with phase change (melting or freezing), and focus on 2 applications:

The model is based on the two-phase formalism developed by Bercovici et al., 2001 [8] for a non-reacting two-phase medium, which we generalise to allow for non-congruent phase change. This requires solving equations of conservation of mass and momentum for each phases, energy, and solute, with appropriate boundary conditions. In our model, the solid and liquid phases are assumed to be in thermodynamic equilibrium, which allows to link temperature and composition through the phase diagram. To simplify the problem, the liquidus temperature is taken to be linear (Fig. 1), which implies that the temperature in the two-phase region is a linear function of solute concentration. We further assume that the solute is considered to be totally contained in the melt (solid/liquid partition coefficient equal to 0). The set of equations is written in 1D spherical geometry. These assumptions allow us to reduce the system of equations to a system of only three equations (conservation of momentum, energy, and solute), which we solve to obtain the temperature (directly connected to composition), radial velocity of liquid (linked to velocity of solid) and porosity (the proportion of liquid).

The code solves equations in a 1D sphere, which size can evolve with time, either due to accretion (TNOs during their formation), or solidification (inner core). This is taken into account thanks to an adaptive grid. The code has been developed from the code written by Lasbleis et al., 2019 [3].