We present a semianalytical model that describes the resonance strength, width in au, location and stability of fixed points, and periods of small-amplitude librations [1]. The model is valid for any two gravitationally interacting massive bodies, and is thus applicable to planets around single or binary stars with arbitrary eccentricities and inclinations. The model assumes some simplifications that limit its validity in some specific cases, mainly for first order resonances at very small eccentricities. In spite of these simplifications the model shows as very helpful to understand the properties of the planetary resonances and its potential is revealed at high eccentricities and/or high inclinations. In particular, it is very simple to generate atlas of resonances for a given planetary system, that means, the domains of the resonances in the plane (a,e) or (a,i). In Fig. 1 we show an example for the system HD31527, where the atlas calculated with the model predicts that the two outher planets are in the resonance 16/3. When one of the bodies has negligible mass, the model reproduces the results of the restricted, asteroidal, case [2]. In this talk we also show how to apply the model and the use of the codes which are available at http://www.fisica.edu.uy/~gallardo/atlas/plares.html. 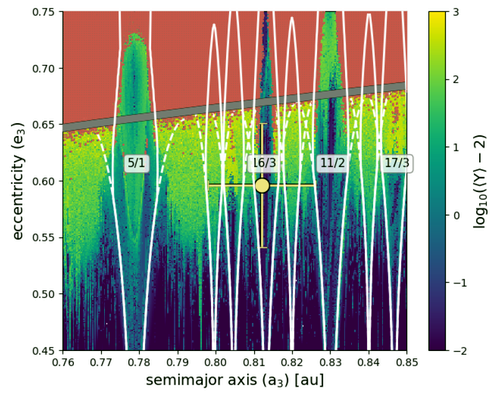 Fig. 1. Atlas of resonances (white lines) near the outher planet of the system HD31527 and corresponding MEGNO map of the region (colored background). Dark blue corresponds to more regular orbits, and lighter tones of green indicate increasingly chaotic motion. The location of the outer planet is shown with a filled yellow circle. The libration widths of the most relevant MMRs determined with the model are plotted as white lines showing that the outher planet is well placed inside the resonance 16/3 with the middle planet [1].