A possible interior layout of (16) Psyche

Introduction
Psyche has long been considered as a remnant of the iron core of an early planet. Due to its uniqueness, Psyche was selected as a target of the NASA Discovery mission. Psyche was initially thought to be an entirely metallic object with typical lunar soil porosities [1,2]. However, the reported bulk density (~4.0) is significantly lower than that of metallic materials (~7.5), inducing an extremely high porosity (> ~50%) [3]. This inconsistency indicates Psyche may have materials other than metals. Several remote sensing observations [4-6] and investigations [7,8] also support potential indications of silicate materials on Psyche’s surface. Given that Psyche has metallic and silicate-rich components, one hypothesis is a fragmented remnant core with a partially-stripped silicate layer driven by hit-and-run impacts [9]. Another hypothesis is a differentiated silicate-iron body that has experienced Ferrovolcanism [10]. Both scenarios suggest the identical interior structure that is a metallic core covered with a silicate-rich layer.

Here, we numerically constrain the size of the iron core and silicate-rich layer by using the Three-layer model and FEM approach. We further investigate if the estimated structure is possible to expose the metallic components at depressions. A better understanding of the internal structure of Psyche will allow us to infer surface conditions observable on NASA’s Psyche mission that will provide key information on Psyche’s history.

Three-layer model
The silicate-rich layer of Psyche could be compressed under the high-pressure distribution of ~10MPa caused by the dense iron core [11-13]. Thus, we develop a structure containing a metallic core, crushed (compressed) silicate-rich layer, and un-crushed silicate-rich layer (top surface layer) (Fig. 1). The entire shape is given by the radar-driven shape model [4]. We assume spherical shapes of the core and crushed silicate layer. While the total bulk density is fixed at 4.0 [3,4], each layer has a different bulk density, depending on the combination of porosity and the grain density of the composition. Table 1 shows possible ranges of geophysical parameters for each layer.

Core size constraints using FEM approach
The Finite Element Model (FEM) computes pressure distributions based on linear-elastic deformation [18]. In FEM simulations, we set the structure of Psyche as the three-layer model that rotates along the shortest principal axis with a spin period of 4.2 h [4]. The initial structure layout is randomly given. Using the pressure distribution data from FEM simulations, we track down the boundary layer between the top surface and the crushed layer by detecting silicate-rich areas that exceed the crushing limit of ~10 MPa. By Reiterating the simulation until finding a unique case where the given structure layout provides the matched boundary layer, we can constrain the size of each layer (The detailed algorithm is described in Fig. 2). Figure 3 shows a unique case when the boundary layer matches the crushing limit.

Results
We run 22,500 cases within possible porosity ranges of the top surface layer and iron core. Figure 4 is a color map showing the constrained core size in radius. The minimum core radius is estimated to ~76 km at the lowest porosities, while the maximum is ~103 km at that of the highest values. This result indicates a distinct relationship between core size and porosity. As the iron core has a higher porosity, its size becomes larger, inducing a relatively thin silicate layer. Furthermore, Psyche remains a large iron core if the top surface layer is highly porous. We also notice that the core size is nearly linearly dependent on the porosity of each layer.

Exposed iron core at depressions
The current shape model of Psyche shows two depressions in the southern hemisphere [4]. The larger crater (D1) is centered at longitude 90° and latitude -80° with a diameter of 67±15 km, while the smaller one (D2) is located around longitude 304° and latitude -52° with a diameter of 53±15 km. Shepard et al., 2017 detected the highest radar albedo at the two depressions. This may imply the abundance of metallic materials in these regions. We investigate the depth of two craters and find the porosity ranges to excavate the iron core at the depressions.

Given the crater sizes, we can estimate the depth of D1 and D2 based on the simple crater formation process [19]. The depth estimates are 6.7 km and 5.5 km at D1 and D2, respectively. These values are within the uncertainties of the shape model [4]. If two craters actually excavated iron-core materials, the porosity of the iron core should be higher than ~20 % with a highly porous top surface layer (Fig4). Although the crater profiles of D1 and D2 are similar, we may observe the exposed iron core at the broader area in D1 because this crater is located near the south pole, where the silicate layer is thinner than the equatorial region. 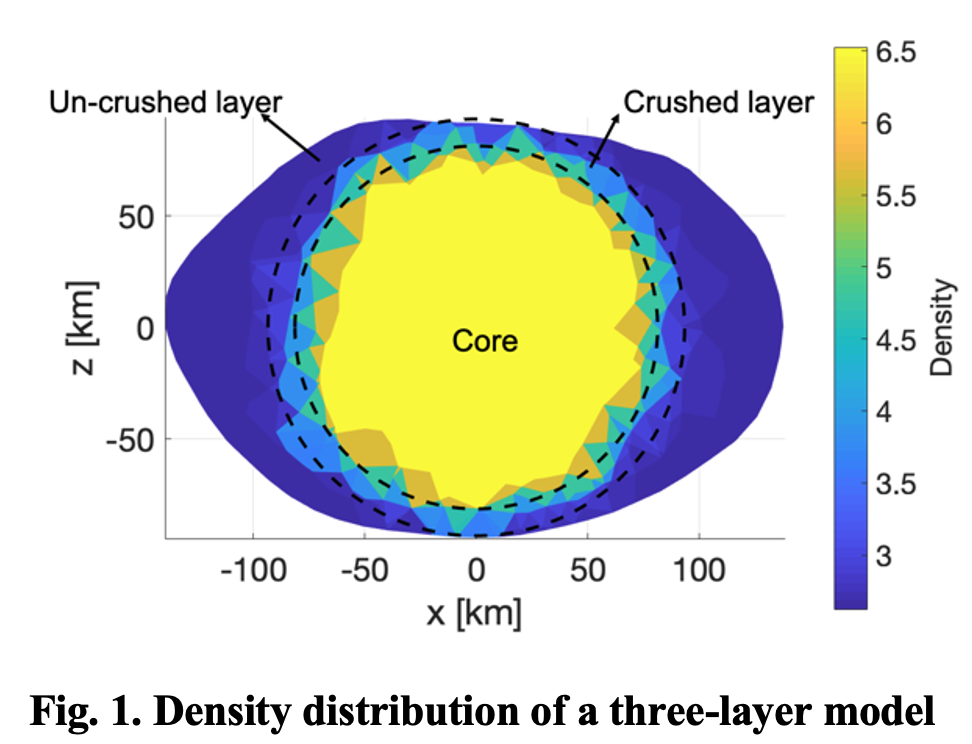 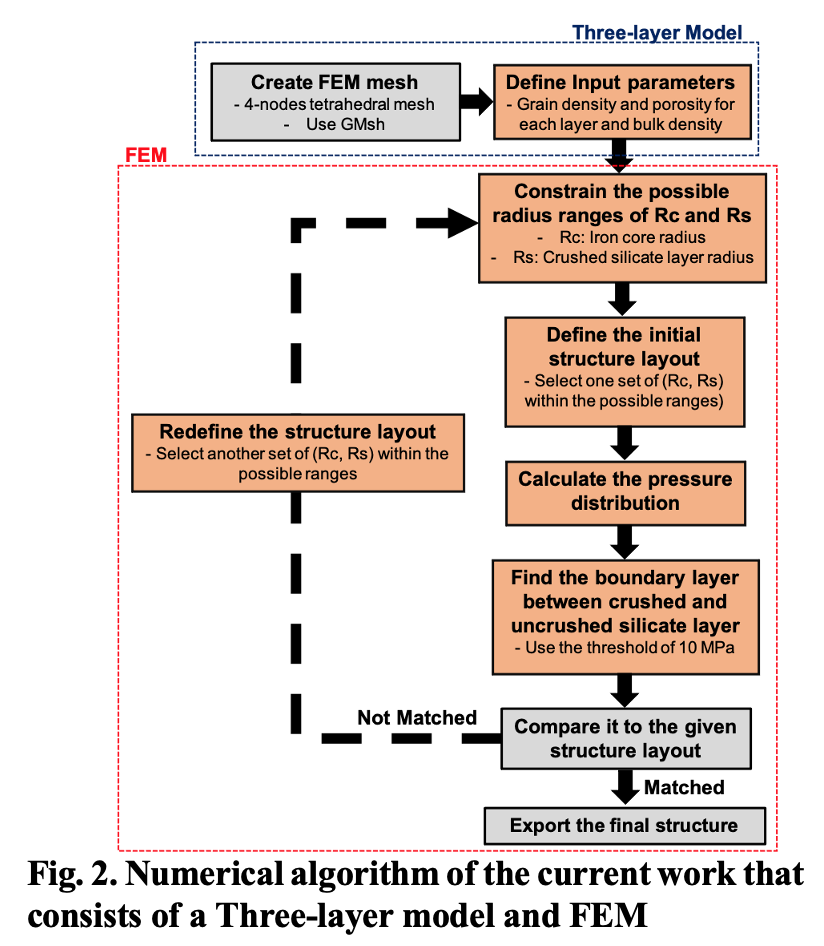 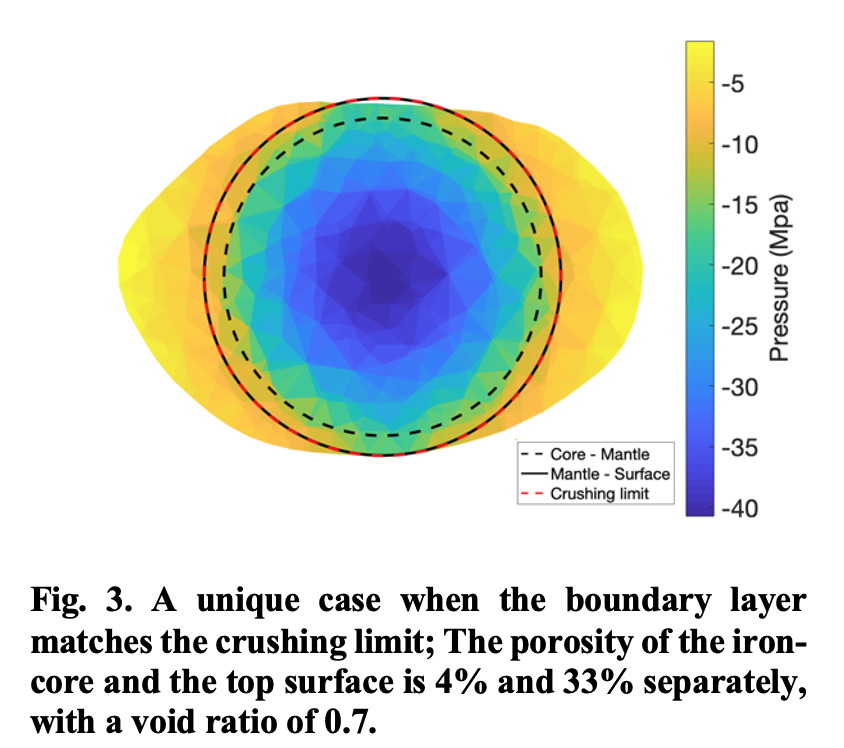 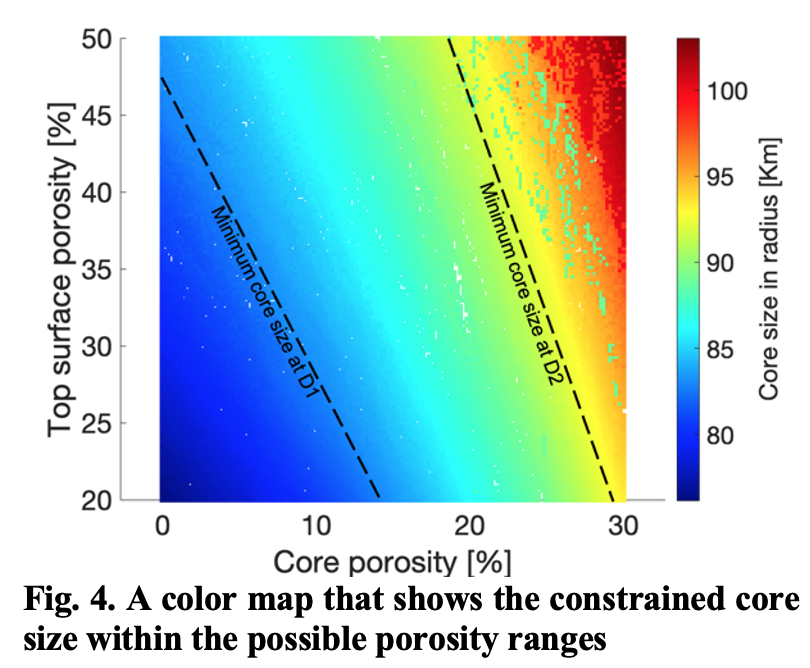 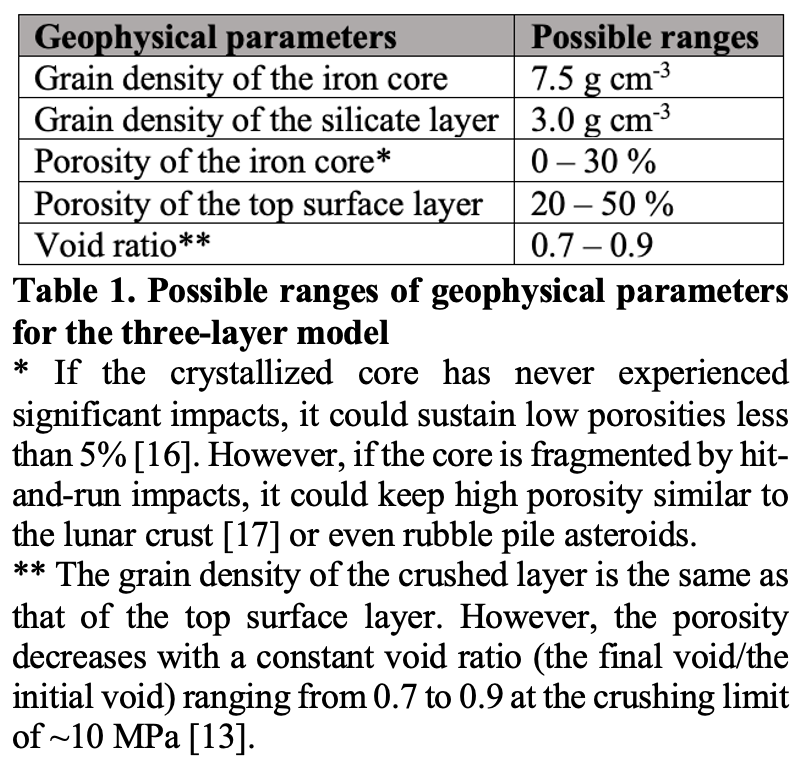