Transition from Non-living to living Matter: can integration of MuGeRo hypothesis and synthetic prebiotic biology laboratory approach shed light on the origin of Life?

Understanding the origin of life (OoL) remains one of the most challenging challenges today with many scientific questions still unanswered. The complexity of the problem of the origin of life has spawned a large number of possible evolutionary scenarios. Their number, however, can be dramatically reduced by the simultaneous consideration of various bioenergetic, physical, and geological constraints. It is a widely accepted hypothesis that life originated from inanimate matter, being somehow a synthetic product of molecular organic aggregates, and as such the result of a kind of synthetic prebiotic biology [1]. In a multiverse perspective, supported by experimental data, I have already proposed the MuGeRo hypothesis in which both cosmic biotic “infection” and abiotic geochemistry contributing to trigger the emergence of life on Earth and beyond [2].

I proposed that spontaneous reactions demonstrated to occur in the environment supposed to exist in the young Earth might have provided the starting organic molecules on which peculiar component of rock (also meteorites) might have act as catalysts of molecular complexity initiating early life processes that, as has been proposed from other Authors are spontaneously and inevitable. In recent decades, the new scientific discipline of synthetic biology has set ambitious goals by pursuing the full design and manufacture of complete genetic circuits, or entire genomes, or even the whole minimal  life in the laboratory. I hold that synthetic biology could also throw new and interesting perspectives on the topic of the origins of life and that, moreover, it could help challenge the most commonly accepted definitions of life, thus changing the way we might rethink life and its origins. Infact, following the bottom-up approach I reported experimental evidence that both extraterrestrial and terrestrial minerals and rocks containing iron produces the self-organizing M4 material (Fig.1 a-h) endowed of amino sugar-driven prebiotic synthetic processes supporting abiogenesis [2,3].

This is in addition to the hypothesis that early forms of life were already present in our solar system at the time of Earth formation [4].

Following the bottom-up approach and using the self-organized M4 material [5] obtained from meteorites and terrestrial rocks and minerals as a model for the emergence and early evolution of life on Earth, this work proposes an evolutionary scenario that satisfies the known constraints by proposing that life on Earth emerged, fueled by solar radiation, from non-enzymatic, photochemical and self-sustaining reactions, surviving through some form of redox chemistry.

The M4 material autopoietically self-assembled on hypersthenic chondrite or siderite and on fragments of same terrestrial rocks containing iron could have contributed to the chemical evolution of biomolecules by own catalytic activities that modify sugars and amino acids produced in the prebiotic environments.

Here I’m proposing that these non-enzymatic, self-sustaining, photochemical reactions might be a primitive examples of reaction network supporting abiogenic development of early life on Earth and/or beyond. Indeed, these non-enzymatic reactions appear efficient enough to provide the variety and abundance of biologically favorable molecules from which Darwinian selection operating at molecular level may have seeded protometabolic reaction in the pre-biotic contexts.

The aim of this work here is to present and discuss the new results of my ongoing experiments compared to those obtained in the past and more recently.

Indeed, the results that I obtained so far do not prove or exclude the possibility that M4 materials could be  a kind of non-conventional form of pre-terrestrial life or earthly early life but demonstrate that they are certainly the results of reactions depending on mineral or rock (meteorites too) that might be considered prebiotic catalysis probably responsible for the emergence of a large pre-biotic pool of biologically favorable molecules.

Furthermore, I proposed that the photo-geochemical abiotic reactions could have given rise to a variety of independent biogenic events leading to a plurality of Darwinian Initial Life Forms (IDAs) from which the earliest forms of terrestrial life emerged giving rise to more than one LUCA (Last Universal Common Ancestor). 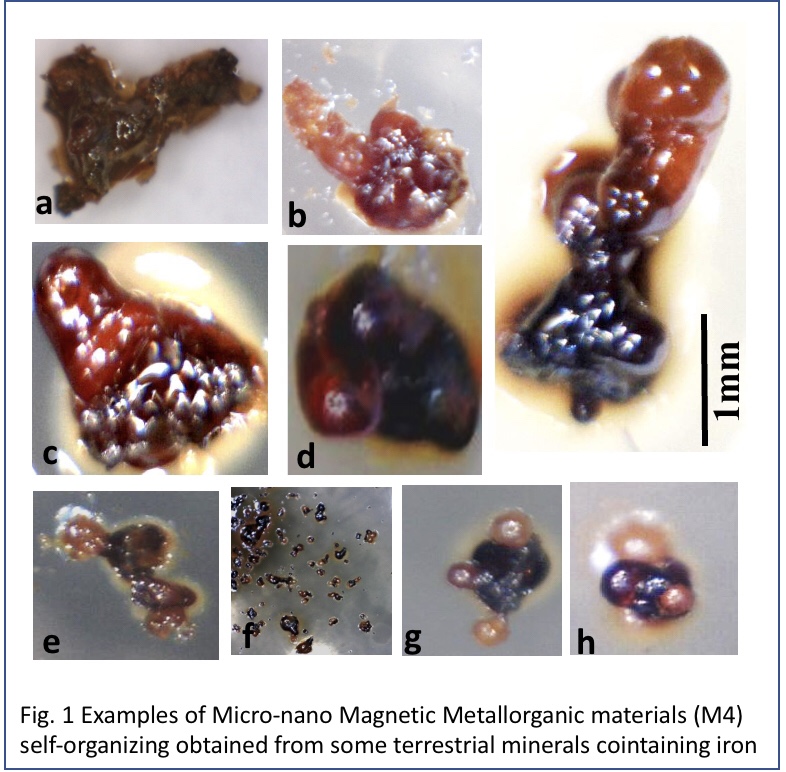 3.del Gaudio, R.,: Transition from Non-Living to Living Matter: filling the gap with a laboratory-based approach according to a Land-based birthplace and Iron catalysis hypotheses at the origin of life on the early Earth and beyond., Europlanet Science Congress-DPS Joint Meeting 2019, Vol. 13, EPSC-DPS2019-80-1 EPSC-DPS2019-80-1.