We investigated the Yarkovsky-O’Keefe-Radzievskii-Paddack (YORP) effect [Rubincam 2000] acting on asteroid (162173) Ryugu. To accurately simulate the thermal condition on Ryugu, we employed a thermophysical model recently developed by Nakano and Hirabayashi [2021], which considers self-heating effect and scattering of radiation and solves the 3-dimensional heat equation via Finite Element Modeling (FEM) approach. Our result indicates that on 1 August 2018 TDB, the thermal torque (YORP torque) was acting in a direction that accelerates Ryugu’s spin rate.

Dynamics of small bodies among the near-Earth and main belt asteroids are controlled by secular effects due to thermal radiation forces and torques, known as the Yarkovsky and YORP effects [Rubincam 2000; Vokrouhlický and Čapek, 2002, Bottke et al., 2006]. Recent increase in the number of observed top-like shape objects suggests that the YORP effect is a key mechanism for their spin rates acceleration (or deceleration), which can induce mass-shedding or catastrophic disruptions [e.g., Holsapple, 2010; Hirabayashi, 2015]. Thus, modeling the Yarkovsky and YORP effects based on a proper thermophysical technique is one of the crucial steps to understand their formation and evolution mechanisms. Here, we investigate the YORP effect on asteroid (162173) Ryugu by using a thermophysical model recently developed by Nakano and Hirabayashi [2021].

Unlike earlier thermophysical models which typically solve the 1-dimensional heat equation, the FEM approach thermophysical model solves the 3-dimensional heat equation. It considers the self-heating and scattering of radiation, similar to other models [e.g., Rozits and Green, 2011; Davidsson and Rickman, 2014]. The surface boundary condition includes: direct solar flux U, diffuse solar radiation flux W, direct self-heating u, and diffuse self-heating w [Davidsson and Rickman, 2014]. To efficiently describe the surface/subsurface thermal evolution, “layer” FEM shape model, where only the layers of tetrahedral meshes exist for the surface and subsurface, and the inside is left as cavity, is used. (See Nakano and Hirabayashi [2021] for more detail.)

We retrieved Ryugu’s ephemeris and the sun’s position vector as seen from Ryugu on 1 August 2018 TDB, using a SPICE kernel for Ryugu. The orbital elements and physical parameters used in this investigation are listed in Table 1. The layer FEM shape model was constructed based on SFM_49k_v20180804 [Watanabe et al., 2019], but the number of facets was decreased from 49k to 4.9k. Figure 1 shows the surface temperature distribution on Ryugu obtained after 25 spins (≈190 hr) at the fixed distance from the Sun. The surface temperature distribution is comparable to that observed by Hayabusa2 spacecraft [Okada et al., 2020].

The YORP effect on Ryugu:

where ε is the emissivity of the surface, σ is the Stefan-Boltzmann constant, T is the surface temperature, G is reflected scattered flux, c is the speed of light, and dS is the facet area. The net torque τ acting on Ryugu can be computed by taking a cross product of the facet position r and the recoil force df for each facet and integrating it over the whole surface:

Due to its top-like asymmetric shape, Ryugu should be susceptible to the YORP effect. Our investigation with the 3-dimensional thermophysical modeling technique clearly showed that Ryugu does experience non-negligible YORP effect. While the YORP torque components change their signs during one spin (Figure 2), the one-spin averaged values were all found to be positive. In particular, the positive  implies an increase of Ryugu’s spin rate. This contradicts with the current hypothesis that Ryugu spun faster in the past and later slowed down to the current spin state [Watanabe et al., 2019]. In this investigation, however, we only explored Ryugu’s thermal condition at a particular epoch. Therefore, we cannot infer Ryugu’s secular dynamical evolution. The YORP effect may be highly sensitive to small topographic features on the surface [Statler, 2009]. The surface roughness may also affect thermal evolutions [Shimaki et al., 2020]. We plan to expand our modeling technique to investigate such effects and to further constrain the Yarkovsky and YORP effects on small bodies. 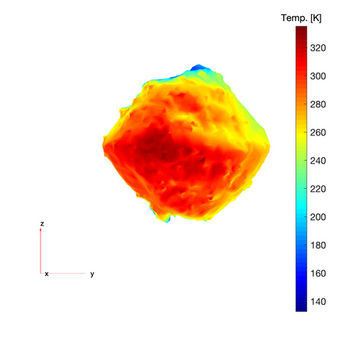 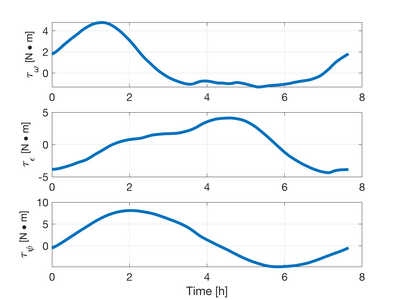