Introduction: The Mars Odyssey (MO) mission is the longest-lasting spacecraft on Mars. Launched in 2001, the orbiter has provided an unprecedented temporal coverage ranging from Martian Year (MY) 25 (Feb 2002) to current MY 36 [1]. The Neutron Spectrometer (NS) is one of the instruments onboard MO, and it has been surveying the shallow (~first meter) subsurface of Mars for hydrogen to map its amount and global distribution [2]. MO/NS measurements have been used to locate the main reservoirs of hydrogen content on Mars (Fig. 1) [3].

The flux of neutrons leaking from Mars’ surface is inversely related to the hydrogen content of the soil. This is because hydrogen is especially effective at moderating neutrons generated through collisions between cosmic rays and atoms in the Martian soil. Based on this principle, MO/NS collects neutron fluxes in three consecutive energy bands: thermal (0-0.3 eV), epithermal (0.3 eV-700 keV) (ECR), and fast (0.7-5 MeV) neutron ranges. Among these, epithermal neutrons are more useful in interpreting hydrogen abundance, as they are less sensitive to variations in the soil’s amount of heavy elements.

MO/NS measurements are sensitive to the hydrogen content of the soil, but not to the type of molecular association of such hydrogen. Potential hydrogen carriers in the Martian soil include: (1) buried water ice, (2) structural water bound in salts (chemisorbed water), and (3) water molecules adsorbed on the surface of soil grains and minerals (physisorbed water) [4]. Potential shallow subsurface water ice reservoirs far from the poles are of special interest, because they may constitute an important source for future In-Situ-Resource-Utilization (ISRU).

Objective: Here, we look for shallow subsurface water ice from mid to equatorial latitudes by analyzing variations in epithermal count rates (ECRs) at seasonal and sub-seasonal timescales. The magnitude and the timescale of these variations can be helpful to identify the molecular association of the hydrogen present in the shallow subsurface.

Methodology: We retrieved the MO/NS data set available in NASA's PDS and stored it in a No-SQL local database to simplify analyses. Using 5° × 5° bins, we calculated the climatological (C) averages of ECRs for the entire duration of the mission, and the sub-seasonal (Sx) averages of ­ECRs for different periods (x) of solar longitude (Ls). In each case, we discarded measurements affected by the presence of CO2 frost. Then, we defined the relative sub-seasonal variation in each bin as RVx = (Sx-C)/C. Finally, we calculated T-test p-values corresponding to each bin and the rest of the domain considered here (-55° and 55°). Only when the returned p-value was lower than 0.05, the variation in ECRs was considered statistically robust.

Preliminary Results: Fig. 2 shows areas with significant seasonal variations in ECRs during Ls periods 0° – 90° (top) and 180° – 270° (bottom). The areas highlighted in orange are Hellas Planitia in the southern hemisphere, and Utopia Rupes in the northern hemisphere. These are the only regions in which multiple, adjacent bins undergo a significant variation throughout the year. Similar results have been obtained using different bin sizes and Ls periods for which statistically-robust analyses could be performed. 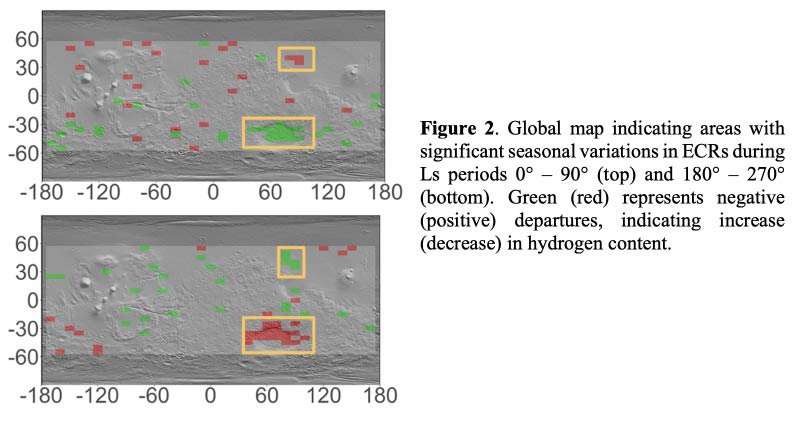 The relation between the seasonal variation in ECRs and the ground temperature retrieved from TES and THEMIS at Hellas Planitia and Utopia Rupes (not shown here) indicates that the coldest ground temperatures occur at the same time as the largest increase in hydrogen content is observed (and vice versa), suggesting that water ice might form in the shallow subsurface of these regions during the cold season, and then sublimating during the warm season of each hemisphere. Using modeling and satellite observations, we plan to investigate whether the magnitude and timescale of the observed seasonal changes in ECRs are consistent with changes in water ice, chemisorbed water, or physisorbed water.

Conclusions and Significance: Only Hellas Planitia and Utopia Rupes (Fig. 2) undergo a statistically-significant variation in ECRs (and therefore in the hydrogen content in the first meter of their subsurface). This variation is correlated with temperature in both regions, supporting the hypothesis that shallow subsurface water ice might form and sublimate during the cold and warm seasons of each hemisphere. These results are potentially important for future human exploration of Mars, as shallow subsurface water ice far from the poles is key for ISRU.